Switch to Ind AS boosted 72 firms’ net worth by Rs1.65 trillion: Study

Mumbai: Seventy-two of India’s largest companies recorded a Rs1.65 trillion increase to their net worth as they moved over to the new accounting standards.

While factors such as dividends contributed, the major reason for the addition was the use of a one-time provision allowed for marking fixed assets to fair value.

The net worth change was revealed by an analysis of restated financial statements for the March 2016 quarter.

Indian companies are in the process of shifting from Indian Generally Accepted Accounting Principles (GAAP) to Indian Accounting Standards (Ind AS).

The analysis below is based on data that audit and consulting firm KPMG has compiled on the changes in the financial statements.

This is the fourth in a series of stories done in partnership with KPMG. The stories examine financial statement changes under the new accounting standards. The current story is the last in this series for the financial year ending March 2016, based on the data which appears with a one-year lag. Previous stories have looked at the trend in companies reporting higher profits, revaluing upwards their property, plant and equipment, or PP&E, and reporting higher revenues.

The analysis compares the latest available figures under the new and old accounting standards. This entails looking at March 2016 numbers under the old standards to the numbers revised as per the new ones. Companies provide a comparison with earlier accounting standard when they publish the latest results. This means that comparisons between the two can be done with a one-year lag. This is the first time that all the eligible BSE100 companies have declared their consolidated balance sheets. Many only provided standalone results earlier. The latest results revealed higher revenues, but lower profits. Higher finance costs contributed to the profit decline. But the most noteworthy change was in net worth.

The increase in net worth could arguably be one of the largest ever such balance sheet adjustments that corporate India has ever seen.

The biggest reason for the net worth changes are PP&E adjustments of Rs89,324.28 crore. Many companies were faced with write-downs on fixed assets under the new norms. This would have eroded their net worth. Such an erosion would have hit firms already laden with high debt. Experts believe that they therefore used the revaluation option to increase the value of land to compensate. This has had the net effect of net worth actually increasing instead of falling as it would have otherwise, as Mint had reported earlier.

Higher valuation for financial instruments and PP&E helped mitigate the negative impact of higher taxes under the new norms.

Which sectors saw the most impact?

Companies in the iron and steel, and intermediate products segment showed a Rs30,626 crore increase in net worth. But for the PP&E changes, there would have been a fall in the net worth. PP&E changes contributed Rs39,229 crore to sector’s net worth increase. Among the largest proportionate changes to net worth was seen in the cigarette and tobacco sector. The companies’ net worth was up 25.5% to Rs42,940 crore. This is largely because of dividend timing issues for ITC Ltd. Companies can now only recognise dividends as a liability after shareholders approve it. Earlier, it was recognised when a dividend was proposed.

The commodity chemicals sector saw its net worth increase 34.4% to Rs9,453 crore. This is because of changes in the valuation of financial instruments. Accounting for business combinations also had an impact on net worth. An example of a business combination is when one company buys another.

There is a degree of opacity around business combinations. Companies often have stakes in other smaller companies involved in a related business. For example, a car manufacturer may have a stake in a company which makes auto parts. The company often has to decide how much of the component-maker’s sales are to be counted as part of the auto-maker’s total sales. Many companies have changed their practices in such cases to adhere to the new norms. Some have started adding more of the sales, finance costs and other assets and liabilities to the main companies’ numbers. Others have stopped adding what they used to earlier. However, companies haven’t provided clarity on the changes they made and their reasons for doing so.

Sai Venkateshwaran, partner and head (accounting advisory services) at KPMG said companies had not been forthcoming with disclosures on how the new consolidation requirements have impacted them in the March quarter consolidated results. Investors will now have to wait for annual reports to fully understand the details.

“A lot of the companies that have been impacted by the new consolidation standards have provided no disclosures with their annual consolidated results on the changes to the universe of subsidiaries that they now consolidate," he said.

The annual report is expected to have information on the entities which have now been consolidated or de-consolidated under Ind AS. It should also have qualitative information on the nature of, and risks associated with, the group’s interests in other entities, including subsidiaries, associates, joint ventures and other entities, and the effects of those interests on the group’s financial position, financial performance and cash flows.

There are also some sectors which saw a decline in net worth.

Notably, realty companies saw their net worth decline by 16.8% to Rs24,195 crore. They had a net worth of Rs29,069 crore as per the old accounting standards. This declined by Rs4,874 crore following the shift to Ind AS. Realty companies have been struggling under a crippling debt burden. And companies aren’t exactly out of the woods yet. The new standards don’t seem to have helped. Changes in project accounting rules are said to have caused the reduction in net worth, according to KPMG. They have to account for projects at a lower value based on the level of completion.

Other key financial indicators have also seen changes under the new standards.

This has not helped operating performance. Earnings before interest, taxes, depreciation and amortization (Ebitda) were down 3.54%. This is because the increase in revenue due to excise duty inclusion is only an accounting change which does not trickle down to profits. Finance costs have meanwhile risen 1.97% to Rs96,595 crore. This has contributed to profits after tax falling on an aggregate basis. They are down 1.8% to Rs2.42 trillion. This is in spite of lower depreciation and taxation deductions. Taxes are down 14.12% to Rs84,847 crore. Depreciation charges are down 5.03% to Rs1.66 trillion (see chart 2). 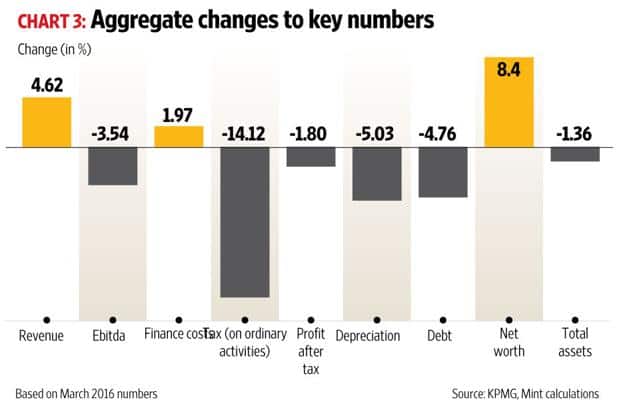 A total of 44 out of the 72 companies under consideration had lower profits. Only 28 recorded a profit increase. This is in contrast to earlier quarters where profits seemed to show an increase. However, many companies had only declared standalone numbers. This means that they are not strictly comparable. This time, all of them have provided consolidated numbers. These consolidated figures provide a more complete picture of a company’s operations.

There are also some interesting company-specific trends.

Vedanta Ltd. showed a significant tax gain under the new norms. The rise is Rs. 11,110.51 crore for Vedanta alone. The total amount for all 72 companies is Rs13,947 crore.

Eicher Motors Ltd showed a Rs8,717.53 crore drop in revenue. This 55.57% fall is likely because of a change in the way it counts the revenue of joint ventures. Eicher used to count such revenue as part of its own revenue. This is no longer being done under the new accounting standards (see chart 3). 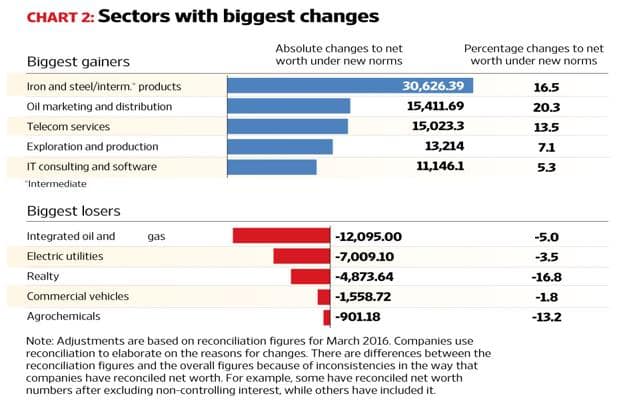 The three companies did not respond to emails seeking comment.

KPMG’s Venkateshwaran said the new accounting standards provide significantly greater level of qualitative and quantitative information than was available under the old accounting standards. An example is companies being required to provide sensitivity analysis on key fair value assumptions.

“Such additional disclosures make it possible for an investor to carry out more meaningful comparisons of companies and could help form a judgment on how aggressive a company has been in making key judgments in estimates, and this in turn can help provide a clearer picture of its financial performance and position," he said.