Sebi to focus on big bang market reforms at board meeting

Sebi to consider proposals such as making algorithmic trading cheaper and more accessible, and reducing fees charged by mutual funds to unit holders

Mumbai: Capital markets regulator Securities and Exchange Board of India (Sebi) will consider closely supervising the work of auditors, independent valuers and compliance secretaries and penalize them for lapses at its board meeting on 28 March, three people with direct knowledge of the matter said.

The Sebi board will also consider proposals such as making algorithmic trading cheaper and more accessible, and reducing fees charged by mutual funds to unit holders. 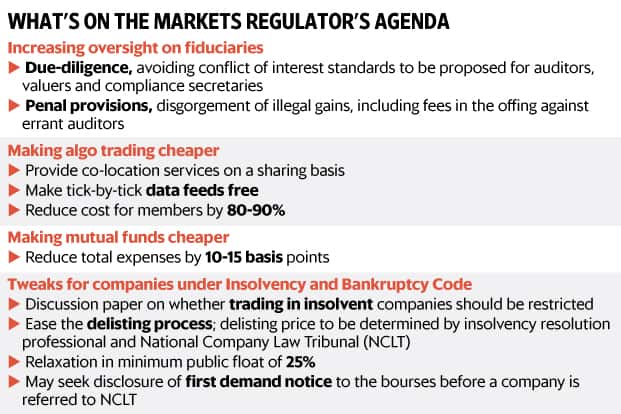 Norms for companies admitted to bankruptcy court related to their trading, delisting, and disclosures will also be discussed, the people said, requesting anonymity.

The proposal to increase auditor oversight comes amid a move by the government to set up the National Financial Reporting Authority (NFRA) as an independent regulator for auditors, who are facing greater scrutiny after a $2-billion fraud was discovered at a Mumbai branch of state-run Punjab National Bank last month.

“Under the proposed norms, Sebi will have powers to disgorge ill-gotten gains and bar auditors from the securities market," said one of the people cited earlier.

This is in line with the recommendations of a panel on corporate governance under banker Uday Kotak, which had suggested that the markets regulator examine the role of third-party fiduciaries.

However, the Institute of Chartered Accountants in India (ICAI) had protested the move as it was already regulating auditors.

“Action against expert advisers has been rare. The reason is CAs (chartered accountants) and valuers always claim to use information provided by management. They lend their name to dubious financial statements and valuations," said R. Narayanaswamy, professor of finance and control at the Indian Institute of Management, Bangalore.

“In my role as audit committee chair, I have found that a standard ploy is to describe the valuation report or opinion as “draft for internal discussion only" and include a whole lot of disclaimers that make it impossible to pin down responsibility on the expert. Sebi should ban the use of such reports by management and board. Listed companies should be required to engage CAs, valuers and other experts who meet stringent standards of competence, ethics and track record," Narayanaswamy said.

The discussion paper will also address issues such as easing the delisting process for insolvent companies, fixing of the delisting price, relaxing the requirement that every listed firm should have a minimum public ownership of 25% and so on.

Besides, Sebi will also reduce the expenses charged by mutual funds by 10-15 basis points. A basis point is one-hundredth of a percentage point.

This is based on its internal study that mutual fund schemes have levied some charges to the investors unethically, said the second of the three people cited earlier.

In 2012, Sebi had allowed mutual funds to charge 20 basis points of assets under management of the scheme in lieu of exit loads, or the sum collected from investors when they sell holdings.

The regulator told the fund houses to add back exit loads to the schemes to prevent loss to other investors.

“But since then Sebi has observed that hardly any benefit has come to an investor," this person said.

Another key reform agenda is to make algorithmic trading cheaper, make it more accessible and reduce preferential access by allowing brokers to share co-location facilities.  Co-location allows members to place their servers in the exchange premises for faster access to trading and feeds. In addition, Sebi is also proposing that tick-by-tick data feed be given free of charge. Tick-by-tick is a data-heavy feed that provides details of all orders and trades on a real-time basis.

NSE and BSE didn’t respond to emails seeking comment on the impact of the proposed move on revenues. For the year to March 2017, NSE generated Rs400 crore from co-location services, about 15% of its overall revenue .

“These proposals will democratize algorithmic trading, make it cheaper and more accessible to members. The norms could reduce the cost by one-tenth," said Kunal Nandwani, founder and CEO of algorithmic trading technology provider uTrade Solutions.

Jayshree heads a team of reporters focussing on legal, regulatory, investigative stories. She has worked for over a decade, reporting on financial scams, legal stories and the intersection of corporate and regulatory issues. She is based in Mumbai and has previously worked with Business Standard, Mint, The Morning Context and Bloomberg TV India.
Read more from this author
Catch all the Business News, Market News, Breaking News Events and Latest News Updates on Live Mint. Download The Mint News App to get Daily Market Updates.
More Less
Topics
mint-india-wire
OPEN IN APP