At Larsen and Toubro, a daunting act of balancing the juggernaut lies ahead

AM Naik's successor is faced with the task of precariously balancing the juggernaut, until macroeconomic winds turn more favourable

Undoubtedly, it was under A.M. Naik’s stewardship that Larsen and Toubro Ltd (L&T) earned a pride of place in the Indian equity markets.

From the time he took over the reins as chairman and managing director in 2003 and until date, L&T’s market capitalization has surged three times to ₹ 1.425 trillion. This implies a compound annual growth rate (CAGR) of 25%, which surpasses the 21% CAGR in the MCap index of BSE 100 companies during the period. Not just this. L&T’s stock, which trades at ₹ 1,519, is reckoned by analysts, brokers and investors as the best play on the economy.

The first major decision in his 13-year old journey at L&T’s helm to sell its cement business to the Aditya Birla group in lieu of the equity stake held by them in the firm, was creditable. For, it marked the end of takeover threats by big industrial groups and established greater employee and public shareholding. 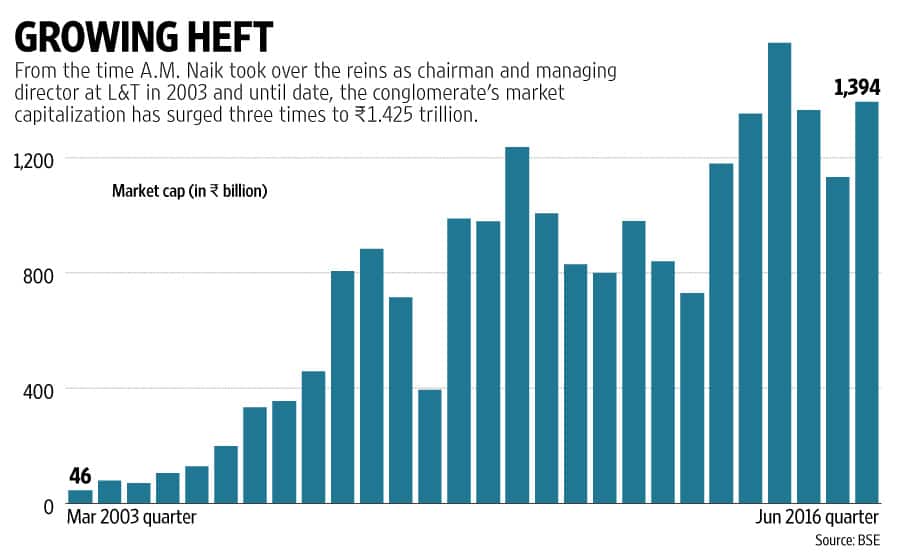 It also ended its presence in its only commodity play—cement. Importantly, it marked L&T’s transition from a sizeable engineering and cement conglomerate into an indomitable edifice spanning several businesses such as hydrocarbons, heavy engineering, finance and information technology (IT).

Some analysts have been critical of Naik’s diversification into unrelated areas such as finance and information technology (IT), though others consider these as cash-accretive businesses that would provide a hedge against economic recession.

Proof of this was seen in the company’s financial results during the last two years, when profit growth in the infrastructure segment dropped to single digits. Overall profitability got a leg-up from IT and financial services that did well and helped buck an economic slowdown.

Again, Naik’s decision to enter these businesses can be lauded in that the two recently announced public issues of L&T Infotech Ltd and L&T Technology Services will help unlock shareholder value as the money deployed in these businesses generates good returns.

Further, Naik leaves behind a legacy of not just diverse businesses but diverse markets, too. From a pure domestic infrastructure firm a little over a decade ago, L&T is now present in new markets, such as West Asia.

Today, almost one-third of its annual order inflows come from overseas, offsetting the slow pace of infrastructure development and order inflows in the country.

Of course, in West Asia, the firm’s timing was perhaps wrong as the crude oil price crash stymied expansions in this region.

L&T’s strength lies not just in diversification, but also in attaining size and scale in its businesses, enough to compete well.

That said, sustaining fixed costs and overheads in the face of an economic slowdown is challenging. This is mirrored in its operating margin that has slowly started trending lower from 13-14% about a decade ago and is unlikely to improve in the near term.

That apart, L&T could boast of a sizeable order book, enough to generate revenue for the next two years. But then, its balance sheet is also weighed down by the same. Economic slowdown and project delays due to tight liquidity conditions among customers has led to a surge in working capital requirements that is one-fourth its net revenue.

The change of guard comes with huge challenges, too. Through Naik’s tenure, L&T has been unable to churn out profits from some businesses. Its shipbuilding, heavy forgings, hydrocarbons, power and road subsidiaries are either loss-making or have wafer-thin profits.

The scene is far from cushy in developmental projects that include roads, ports, bridges and urban infrastructure.

The street is also concerned about the Hyderabad Metro project, mired in clearance hurdles and delays. It is likely to bleed once it is fully operational and weigh on L&T’s overall profitability.

A Religare Capital Markets report says that decisions of “capital misallocations" in the recent past may not be addressed in the expected timelines. If so, it would tell on profitability. Meanwhile, analysts feel that FY17 will mirror the full impact of the new accounting (Ind-AS) norms, which could hurt profit growth given the more stringent provisions required.

Be that as it may, Naik’s successor is faced with the task of precariously balancing the juggernaut, until macroeconomic winds turn more favourable.