Worst over for media as ad spends show signs of recovery

Broadcasters have done much better than companies from the print media, indicating there has been a fair bit of recovery on ad revenues in television

Is the worst over for media companies on the advertising revenue front? Let’s see what the December quarter results tell us.

Take a look at Chart 1. It shows advertising revenue growth for the three months ended December for both print media and broadcasting companies. Broadcasters Zee Entertainment Enterprises Ltd and Sun TV Network Ltd have done much better than companies from the print media, indicating there has been a fair bit of recovery on advertising revenues in television. Unfortunately, this is not very visible for print media.

What helped TV accomplish better ad revenues last quarter? According to Rohit Dokania, an analyst at IDFC Securities Ltd, “TV was severely impacted in the month of December 2016 (due to demonetization) and benefited immensely from the recovery in the FMCG (fast-moving consumer goods) sector, which contributes as much as 55% to television advertising spends."

On the other hand, the FMCG sector is not a very large advertiser on print, says Dokania, adding, “It’s worth noting that print media companies had a relatively better advertising base quarter (December 2016 quarter) thanks to the Uttar Pradesh elections and that advantage was absent in this fiscal’s December quarter." Nonetheless, Hindustan Media Ventures Ltd (HMVL), which publishes the Hindi newspaper Hindustan, has performed better than other print media counterparts—DB Corp Ltd, HT Media Ltd and Jagran Prakashan Ltd. In its investor presentation, HMVL said ad revenue growth was driven by an increase in yield and volume. The worst performer in ad spends among print media companies—DB Corp—maintains that the month of October suffered owing to the shift of 11 days of the festival season to the September quarter. DB Corp said categories such as real estate, education and electronics declined during the quarter. 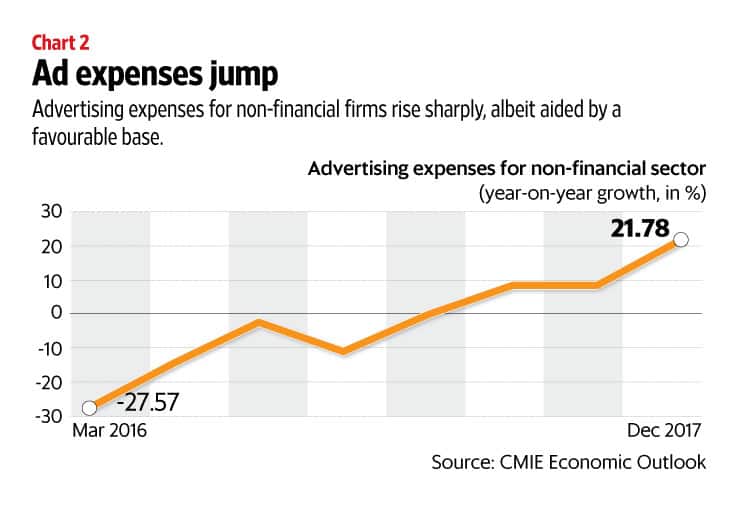 However, things seem to be looking upbeat. The month of November showed single digit growth and in December there was a strong double-digit growth, pointed out the company. “And further I can say as we are on 18 January today we are still maintaining the strong double-digit growth (of) around 15%, 16% in the month of January till 18," said Girish Agarwaal, non-executive director, DB Corp, in the December quarter earnings conference call.

As Chart 2 shows, advertising expenses of the non-financial sector according to data from the Centre for Monitoring Indian Economy have increased 22% year-on-year in the December 2017 quarter. This suggests that a recovery is happening even as the measure had declined 11% in the base December 2016 quarter. But note that advertising expenses had increased at a relatively slower pace of about 8.5% in the June and the September quarter, which also had favourable bases in varying degrees. Analysts have reasonable hopes that fiscal 2019 will be a year when advertising revenues look upbeat for both television and print media.

Gnanasundar, an analyst at Spark Capital, says new product launches from the FMCG sector should lead to FMCG companies increasing their advertising expenditure in the coming year. Further, the coming elections in several states will give a boost to government spending on ads and that will be very helpful for print media firms, added Gnanasundar. And then, of course, there is the overall pick-up in economic growth as the GST teething troubles get over. Adds IDFC’s Dokania, “One can say fiscal 2019 is poised for a recovery in advertisement for print helped by traction owing to elections, which will improve government sector advertisements."

It is crucial that ad revenues show a marked improvement for print media companies, as rising newsprint prices are a threat.

Mint is published by HT Media group, which competes with some of the other media firms mentioned in this story.