While Kotak is a predominantly west India-based bank with 40% of its branches in Maharashtra and Gujarat, two-thirds of ING Vysya's branches are in the southern states

Kotak Mahindra Bank Ltd’s deal to merge ING Vysya Bank Ltd with itself looks like a steal. At a 725:1,000 share swap ratio, ING Vysya is valued at a market capitalization of ₹ 15,963 crore. That is lower than the ₹ 16,500 crore price which investors were expecting Kotak to pay and just a 3% premium over the last closing share price.

More importantly, this transaction represents a price to book (P/B) value multiple of 2.1 times for ING Vysya, considering the estimates for fiscal 2015 and Thursday’s closing prices. Purely by that yardstick, Kotak has done well for itself. Other recent mergers such as HDFC Bank Ltd-Centurion Bank of Punjab and ICICI Bank Ltd-Bank of Rajasthan happened at P/B multiples as high as 4.8 times. 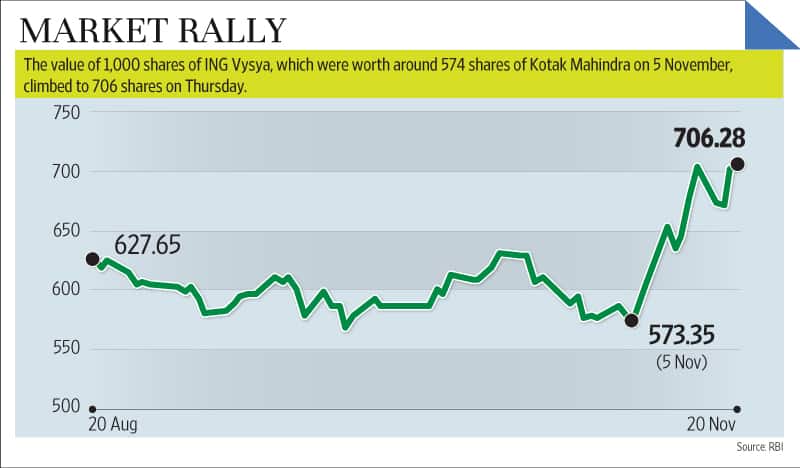 While Kotak’s shareholders would face a dilution of 17.9%, the transaction would increase earnings per share (EPS) and book value per share from current levels. Compared with Kotak’s current consolidated number estimates, the post-merger entity’s EPS would be 6.3% higher for the current fiscal. Similarly, the book value per share would rise 14.7%.

While ING Vysya’s investors may feel hard done by the parent’s decision to hive off the lender, it had been in the works for some time. ING NV has already disposed of its life insurance and wealth management joint ventures in India. Note also that ING shares rose 17.1% between 7 November and 19 November while Kotak’s fell 4.5%. To put it another way, 1,000 shares of ING were worth just 574 shares of Kotak before this rally. At Thursday’s close, the stock prices had climbed to 706 shares of Kotak for 1,000 shares of ING, as the chart shows.

Second, Kotak’s business is more urban-centric and tilted towards the retail customer. Close to half of its consolidated loan book goes towards financing the purchase of cars, commercial vehicles and homes. For ING, the retail book is about 17%. Its area of strength is the small and medium enterprises segment (SME), which accounts for nearly 38% of its outstanding credit.

A bigger and more diversified balance sheet should make Kotak better placed to take advantage of the economic recovery when it strengthens.

For Kotak’s promoters, too, it’s a win-win deal. The merger will reduce their holding to 33.9% in the merged entity, compared with 40% now. The central bank had asked promoters to pare their stake to 30% by September 2016, according to Espirito Santo Securities.