Copper prices since the start of September are up by 8%, on the back of central bank-sponsored monetary stimulus measures in the US and the euro zone. The jury is out on whether the monetary stimulus will only prompt a liquidity-driven rally in various asset classes or will also succeed in spurring economic growth. Copper’s behaviour will be a lead indicator to be watched, as the metal is seen as a proxy for the state of the economy.

The demand-supply situation for copper remains in favour of producers, though London Metal Exchange prices did display some stress in 2012. The International Copper Study Group recently released data on copper production and usage in the first half (H1) of 2012. Demand for refined copper rose 7.3% year-on-year in the first half, partly caused by a low base as growth in the first half of 2011 was only 0.8%. 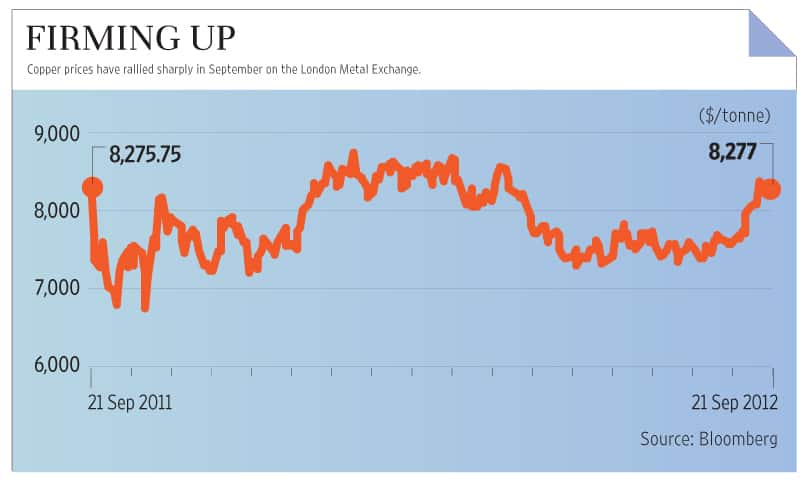 Production of refined copper did not keep pace with the rise in demand, and rose by just 3.8%. Capacity utilization of refineries remained virtually unchanged at 78.8% despite higher demand, with producers not seeing enough incentive to ramp up, when faced with weak price trends. The deficit was plugged by selling down inventories.

Copper consumption in the September quarter may not be as strong as was seen in the first half, but if the price recovery sustains, then it may indicate that things are getting better. China is the main player to watch, as it accounted for 42.5% of global copper consumption. Manufacturing data has been indicating a definite slowdown, prompting speculation that the government may do something to stimulate growth.

The current environment remains uncertain, illustrated well by two stories on Bloomberg on the same day—one talks about hedge funds cutting bets in commodities, and another dwells on a Goldman Sachs report that forecasts good times for commodities, including copper.

Hindustan Copper Ltd is the only domestic firm that mines copper—the others operate custom smelting operations—and the recent gains in copper prices come at a time when the government is planning to pare its stake in the company. Steady metal prices should help in selling the issue to investors.