Home >Money >China, US spar over currencies ahead of Obama visit

China, US spar over currencies ahead of Obama visit

China, US spar over currencies ahead of Obama visit

Singapore: The US and China sparred over exchange rates at a meeting of Asia-Pacific leaders on Sunday, pointing to tricky talks ahead for US President Barack Obama when he flies to China to address economic tensions. 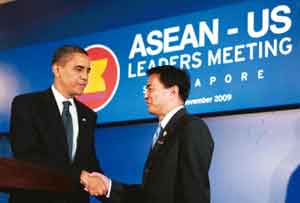 The discord surfaced at a summit of the Asia-Pacific Economic Cooperation (Apec) forum in Singapore when a reference to “market-oriented exchange rates" was cut from a communique issued at the end of two days of talks. An Apec delegation official said Washington and Beijing could not agree on the wording.

That underscored strains likely to feature when Obama begins meetings in Shanghai on Monday following moves by Washington to slap duties on various Chinese-made products and a growing drumbeat of pressure on Beijing to let its yuan currency strengthen. Chinese officials have grown testy about the pressure over the yuan. Chinese banking regulator Liu Mingkang told a forum in Beijing on Sunday that ultra-low interest rates in the US were fuelling speculation in overseas asset markets and threatened the global economic recovery.

Obama pledged on Saturday to deepen dialogue with China rather than seek to contain the rising power, which is set to overtake Japan next year as the world’s second largest economy. But issues ranging from the yuan and trade tensions to human rights could complicate what many regard as the most important relationship of the 21st century.

“With regards to trade, this is a difficult time for the US-China relationship," said Derek Scissors, trade economist at the Heritage Foundation in Washington.

“The signs are actually getting worse instead of better." Chinese President Hu Jintao ignored the yuan issue in several speeches at Apec and focused instead on what he called “unreasonable" trade restrictions on developing countries.

An earlier draft pledged Apec’s 21 members to maintain “market-oriented exchange rates that reflect underlying economic fundamentals". That statement had been agreed at a meeting of Apec finance ministers on Thursday, including China, although it made no reference to the yuan.

Washington says an undervalued yuan is contributing to imbalances between the US and the world’s third biggest economy. China is pushing for US recognition as a market economy and concessions on trade cases that would make it harder for Washington to take action against Chinese products.

China’s central bank said last week it would consider major currencies in guiding the yuan, suggesting a departure from an unofficial peg.

But Chinese vice-commerce minister Chen Jian on Sunday played down talk of a shift in policy as well as mounting expectations of a rise in the yuan’s exchange rate.

The yuan has effectively been pegged against the dollar since mid-2008 to cushion its economy from the downturn.

China is coming under growing international pressure to let it rise because its manufacturers have gained market share at the expense of rivals in countries whose currencies have risen against the falling dollar.

Obama told Apec leaders the world economy was on a path to recovery but warned that a failure to re-balance the global economic system would lead to further crises.

“We cannot follow the same policies that led to such imbalanced growth. If we do, we will continue to drift from crisis to crisis, a failed path that has already had devastating consequences for our citizens, our businesses, and our governments," Obama said.

Obama’s strategy calls for the US to save more, spend less, reform its financial system and cut its deficits and borrowing. Washington also wants key exporters such as China to boost domestic demand.

The Apec statement endorsed stimulus measures to keep the world from sliding back into recession and urged a successful conclusion to the Doha Round of trade talks in 2010.

Neil Chatterjee, Caren Bohan and Lucy Hornby and the Beijing bureau and Paul Eckert in Washington contributed to this story.