Thanks for Visiting Mint
You seem to have an Ad Blocker on. Please turn it off in order to continue, or whitelist Mint
HOW TO TURN OFF AD BLOCKER
OR
REFRESH IF YOU ALREADY TURNED OFF THE AD BLOCKER
Home >Money >Calculators >How much are you spending on mobile data?

How much are you spending on mobile data?

Increasingly, more and more people are spending larger part of their mobile bills on data services, rather than voice calling. Of their total mobile bills, mobile internet users spend 65% on usage of internet data and the remaining 35% is spent on voice calling services. The share of voice in total bills stood at 56% in 2012.

According to a report on mobile internet in India 2016 by the Internet and Mobile Association of India (IAMAI), the average monthly spend on mobile services, voice and data combined, in India in 2016 stood at Rs349 per person.

The report highlights that with increasing age, the proportion of data usage as part of mobile bills goes down, even though the total bill goes up. While 67% of the bill amount is spent on data in the 15-24 age group, only 50% is spent on data by people above 50 years of age. 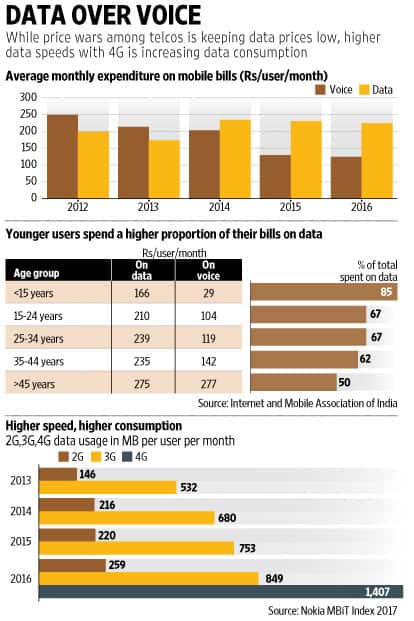 While the price wars among telecom companies are keeping data prices in check, the higher data speeds, such as with 4G, are also increasing consumption in terms of data. According to the Nokia MBit Index 2017, an average 4G user in 2016 used 1,407 MB data per month as against 849 MB and 259 MB used by a 3G and 2G users respectively.

According to the Nokia report, 4G data subscribers, who are only 13% of the 3G subscriber base, contribute 4G data payload equivalent to 21% of 3G payload. Moreover, video and social networking together contribute to 65-75% of traffic while communication and social media apps continue to drive engagement in terms of time spent, the report said.