"storyDirectUrl"
OPEN APP
Home >Market >Mark-to-market >Is DCB Bank the canary in the coal mine?

Is DCB Bank the canary in the coal mine?

It may be a warning for smaller banks to buck up, or get cannibalized by other banks and payments banks backed by telcos or having tie-ups with large banks

DCB Bank Ltd shares plunged 20% on Wednesday after the management announced aggressive expansion plans to compete with a slew of small banks and payments banks in the coming months.

The move comes after the Reserve Bank of India (RBI) issued 23 banking licences in the past few months following a long wait of nearly a decade. One thing is very clear: competition is going to intensify in the banking space.

From that point of view, DCB Bank seems to be a canary in the coal mine, warning the smaller banks to buck up, or get cannibalized by other banks and payments banks that are backed by telecom majors or have tie-ups with existing large banks.

In fact, Murli Natarajan, managing director of DCB Bank in a conference call with analysts, said, “We are paranoid and are over reacting because we do not want to be in a situation where we have not reacted at all to increasing competition in the banking space."

There are around eight microfinance institutions (MFIs) which have received small bank licences. These MFIs will give out loans above ₹ 50 lakhs, which is exactly the lending space in which DCB Bank too is present, said Natarajan. 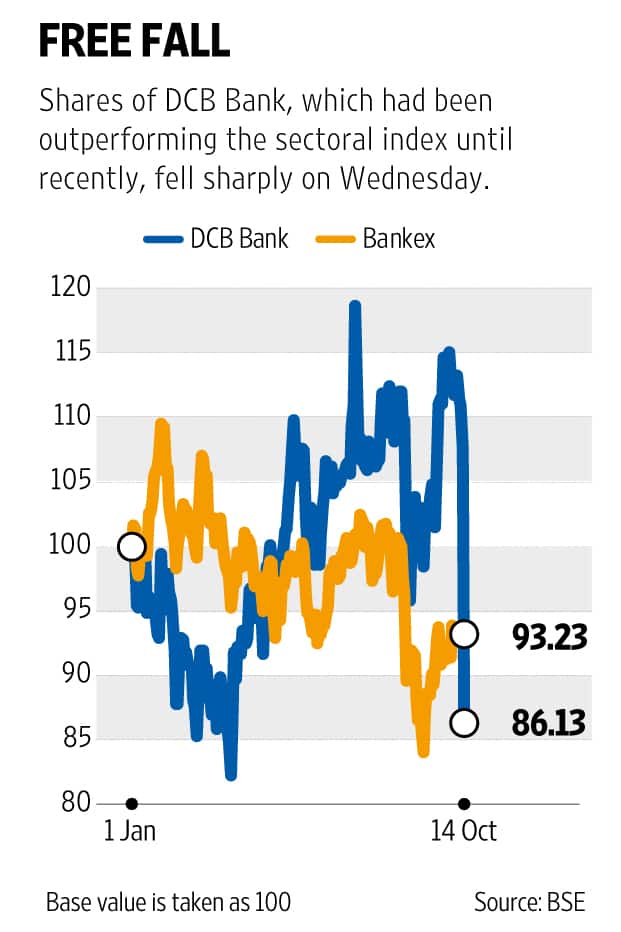 DCB Bank aims to double its branches to 300 and increase the number of employees by 50-60% in the next 12-14 months. This is a marked shift from earlier guidance of adding 25-30 branches every year.

The correction in the stock is because of the impact on profitability from their surprise shift in strategy. Analysts have cut FY16 earnings estimate by around 6-16% and by over 30% for FY17 leading to de-rating of FY17 price-to-book multiple to around 1.5 times from around 2 times before the earnings announcement.

The cost-to-income ratio may rise by 5% to 11% from current levels of 61% and the return on equity may continue to be below 10% as operating expenses increase.

Kotak Institutional Equities in a note dated 14 October said the bank has seen two prior periods (FY2003-04 and FY2008) where sharp cost growth has subsequently resulted in losses for the bank. While one could argue that the bank has been profitable after the management change in 2009, the future earnings trajectory will depend on successful business growth at the new branches.

DCB Bank is exploring partnerships with start-ups that have disruptive banking concepts. It is also looking at plans to form key alliances to improve its product range and distribution.

There will be pressure on the net interest margin in the near term. Management expects margins to ease to 3.5% from 3.79% in the September quarter due to price war in all products and segments, priority sector lending and move towards calculating base rate based on marginal cost of funds.

The bank’s September quarter earnings were nothing to cheer about as net profit fell by 10% year-on-year for the first time in over four years to ₹ 37 crore. A sharp jump in provisions and lower treasury income also weighed on profit growth.

The question is: Do the problems at DCB Bank point to what’s in store for other smaller banks?