Despite the large number of exchanges in the commodities space, MCX has no competition

It’s been about 15 months since the National Spot Exchange Ltd (NSEL) scam rocked India’s commodity markets. Multi Commodity Exchange of India Ltd’s (MCX’s) volumes have fallen sharply, both as a result of the scam as well as the imposition of commodity transaction tax since July 2013.

Meanwhile, rival National Commodity and Derivatives Exchange’s (NCDEX’s) plans to take advantage of MCX’s predicament haven’t amounted to much. While its market share has risen a bit, it’s only because MCX’s volumes have fallen sharply. Its own volumes have been more or less flat at July 2013 levels. Also, the Kotak Mahindra group, which already had a large stake in Ace Derivatives and Commodity Exchange Ltd, has bought a 15% stake in MCX from the Financial Technologies group. The banking company’s decision just reinforces the long-held view that liquidity breeds liquidity and that it’s difficult to capture market share from an incumbent. In MCX’s case, its market share in its top-traded products is well over 90%.

In this backdrop, will BSE Ltd’s plan to enter the commodity segment bear much fruit? Taking up such challenges isn’t new to the exchange. About three years ago, when BSE started competing in the equity derivatives space, it had started from scratch. Its traded volumes in this segment are far more healthy now, although this is aided by market making incentives to trading members. (See: http://bit.ly/1BJjiz9)

Similarly, it has managed decent volumes in the currency derivatives segment, despite a rather late launch. Again, it helped that it didn’t charge for transactions for quite a few months since its launch. While transaction charges are expected to commence from next month, they will be at a fraction of what its competitors charge. In sum, BSE has done well in garnering volumes in two market segments by lowering costs for traders. Of course, it remains to be seen if volumes will be sustainable once it starts charging fees at cost-plus rates.

But pursuing a similar strategy in the commodities space may entail some additional challenges. To start with, the Forward Markets Commission (FMC) currently doesn’t permit market making. Even if it does allow it in the future, BSE might find the regulator’s ownership guidelines to be a constraint. New shareholding guidelines for commodity exchanges limit the maximum ownership of one entity at 15%. Even if BSE manages to gather other investors to buy an 85% stake in the new venture, it will need a buy-in from this set of investors to invest a reasonably high sum for market making purposes. Like the equity segment, commodities trading now includes a transaction tax, which means that market making schemes should at least offset a large part of this cost for trading members to consider the new platform.

Naveen Mathur, an associate director of commodities and currencies at Angel Broking Ltd, says that a big challenge for new entrants such as Ace was the restrictions imposed by the government in commodities trading in the country. According to him, these restrictions act as barriers to innovation in the sector and curtail competition. While FMC had permitted a number of new exchanges in the 2008-09 period, none of these ventures have done well.

NCDEX, which now has a market share of about 15%, gets most of its volumes from agricultural contracts. Less than 10% of its volumes come from gold and silver contracts, one of the few areas where it competes with MCX. So, despite the large number of exchanges in the commodities space, MCX has no competition. 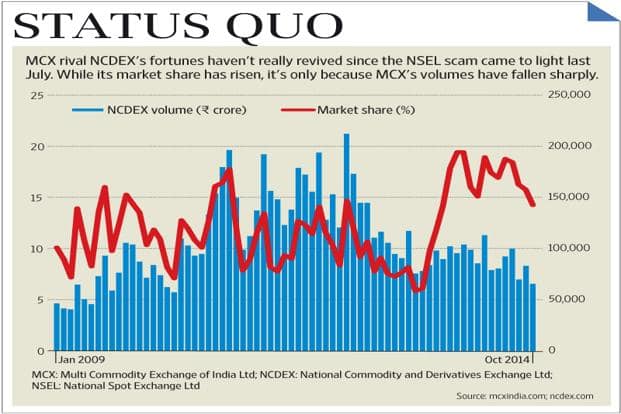 Mathur adds that commodity trading is currently witnessing a downturn owing to low volatility and a bearish trend in many large commodities. Besides, equity investing has found favour with the trading community since mid-2014, thanks to the new government at the centre. In this backdrop, building liquidity has been a challenge for incumbents themselves, and the task will be even more daunting for a new entrant.

On the positive side, lately, BSE’s faster trading technology, sourced from Deutsche Borse, has generated interest from the trading community. And compared to MCX’s other competitors in the commodities space, BSE is far more aggressive and has better relationships with the trading community. While these factors should help, many others need to fall in place for traders to be open to shifting loyalties.