The current season’s coffee crop in India is forecast to be 7% higher than last year’s level. This post-monsoon estimate is slightly lower than the post-blossom estimate by 1.6% but the shortfall is not a deal breaker. Higher output is good news for growers but only if prices are stable or higher. The news on that front is not good.

The International Coffee Organization’s (ICO) composite price indicator average in December 2015 (so far) is down by 22.34% since January, with the Arabicas variety down by 24% (Brazilian naturals) and Robustas down by 18.9%. 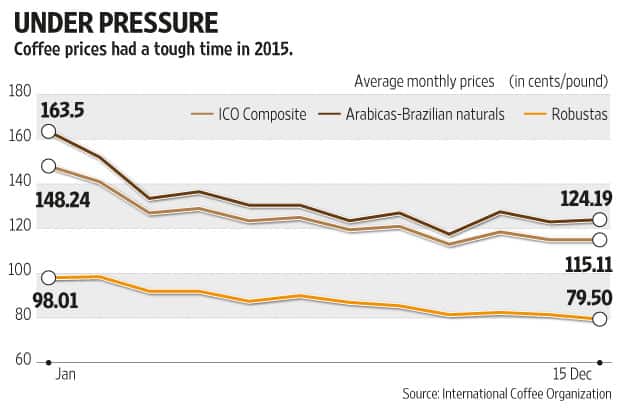 A few factors are behind this decline. One is the depreciation of the Brazilian real versus the dollar. And there has been an accelerated pace of exports from Brazil, a large coffee producer and exporter.

ICO said Brazil’s exports in 2014-15 were the highest on record and up by 1.8% over a year ago. But global export volumes declined by 3.1%, partly due to a sharp drop in Vietnam’s export of Robustas due to lower realizations. Another reason for lower coffee prices is the crash in global commodity prices, since there is a financial market in coffee as well.

Weather is another culprit. At present, heavy rains in Brazil are causing jitters as that could boost output. With the news on weather being volatile—only recently, dry weather in Brazil was expected to hit output—it is premature to draw any conclusions.

Once a clearer picture about output becomes available, that should give some direction to prices. In the near term, the Fed’s rate hike decision and the resulting impact on commodities is a factor to watch. On the positive side, consumption is showing strong trends.

In India, lower prices will eat into sales growth and margins for coffee growing companies, although this is good for the marketers who will see their costs decline.