OTHERS : Mumbai: Indian benchmark indices extended losses for the third straight day on Monday, taking cues from global markets as political uncertainties in the US and dim outlook of global economic growth dampened investor sentiment. The BSE Sensex and NSE’s Nifty 50 opened with gain led by IT heavyweights TCS and Infosys. However, losses in finance, auto and realty stocks dragged the key indices in the negative territory. The Indian rupee recovered against the US dollar and traded marginally below 70 a dollar level.The BSE Sensex closed 271.92 points, or 0.76%, down at 35,470.15. HDFC, HDFC Bank and Reliance contributed most Sensex’s losses. The 30-share index rose over 150 points in the early trading session. The Nifty 50 ended 90.50 points, or 0.84%, lower at 10,663.50.The BSE mid- and small-cap indices fell 0.54% and 1.14%, respectively. Sixteen out of 19 sectoral indices on BSE posted losses, with realty and metal falling most at over 2%. Basic materials, consumption, energy, auto, consumer durables, power and oil and gas fell 1% to 1.7%. IT, telecom and teck advanced.M&M, Bharti Infratel, Kotak Bank, TCS, SBI and Infosys were among the major gainers on the key indices, whereas Hero MotoCorp, Bajaj Auto, NTPC, HDFC and Indian Oil were among the top losers.In global markets, European and Asian markets were mostly lower in light trading on Monday as a partial US government shutdown stemmed holiday cheer. US Futures climbed after Treasury Secretary Steven Mnuchin called top executives from the six largest US banks to discuss liquidity, and assured that President Donald Trump won’t fire Federal Reserve Chairman Jerome Powell. Here are the highlights from the markets:

Max India Ltd said it will sell a stake in its healthcare services joint venture Max Healthcare Institute Ltd to Radiant Life Care Pvt Ltd and global investment firm KKR. Max India shares fell as much as 3.7% to Rs 81.30 per share, after rising 3.43% to Rs 87.35 per share.

BHEL shares rise 4% on JV talks with US company

Shares of Bharat Heavy Electricals Ltd rose as much as 4.36% to Rs 72.85 per share. PTI on Friday reported that the government is making efforts to manufacture lithium-ion batteries in India in the next one year, and talks are on between state-run BHEL and a US firm to form a joint venture in this regard, Union Minister Anant Geete. “Right now we are importing 100 per cent lithium-ion batteries, but efforts are on towards manufacturing them in India within the next one year,” Geete said on Friday, adding that talks are on between BHEL and an American firm to form a joint venture for domestic manufacturing of lithium-ion batteries.

Indsil Hydro Power and Manganese shares rose as much as 4.93% to Rs 83 per share after the company said its joint venture overseas subsidiary Al-Tamman Indsil Ferrochrome LLC has launched its 2nd Phase expansion project.

The cement industry’s problem of plenty

Spate of capacity additions in the absence of significant demand growth would keep the cement industry's utilisation below 70%. https://t.co/hqxnE3YiHt

Cadila Healthcare Ltd said Zydus Cadila received approvals from the USFDA for doxycycline hyclate delayed-release tablets and Febuxostat tablets. Shares traded 0.53% up at Rs 343.85 per share.Dr. Reddy’s Laboratories Ltd said it launched Aspirin and extended-release Dipyridamole capsules, a therapeutic equivalent generic version of Aggrenox capsules, in the US market. The Aggrenox brand and generic had US sales of approximately $182 million MAT for the most recent twelve months ending in October 2018 according to IMS Health. Shares traded 0.16% down at Rs 2,599.80 per share.

Piramal Enterprises said its administrative committee approved allotment of NCDs worth Rs 2,500 crore. Shares traded 1.15% up at Rs 2316.20 per share

Hero MotoCorp shares down 3% as GS downgrades to ‘Sell’

The extension of trading hours might not become a reality anytime soon as the Securities and Exchange Board of India (Sebi), stock exchanges and brokers were yet to agree on how it would be implemented, said three officials with direct knowledge of the matter.“We had enabled the exchanges to trade for extended hours and they were to submit proposals, including risk management framework and member consensus. There are some issues there,” Sebi chairman Ajay Tyagi said after the board meeting of the markets regulator on 12 December. Read more

Aurobindo Pharma Ltd said it has received final approval from the USFDA to manufacture and market Vecuronium Bromide Injection, 10mg and 20mg, a generic equivalent of Organon’s Norcuron Injection. The product will be launched in Q4FY19. Shares traded 0.15% up at Rs 721.60 per share.

Lupin Ltd said it has partnered with AbbVie Inc. to develop and commercialize Lupin’s MALTl inhibitors to pursue development across a range of hematological cancers, many with limited current treatment options. Lupin shares traded 1.44% lower at Rs 845.55 per share.

ONGC shares traded 0.07% up at Rs 148.65 per share. The company said on Thursday it will buy back shares worth ₹4,022 crore at a price of ₹159 each. This is a premium of 7% over ONGC’s prevailing share price at the time of the announcement. The company aims to buy nearly 2% of its shares.

ONGC plans to buy back shares worth ₹4,022 crore at a price of ₹159 each. This is a premium of 7% over ONGC's prevailing share price. https://t.co/PRf0vRMIFs 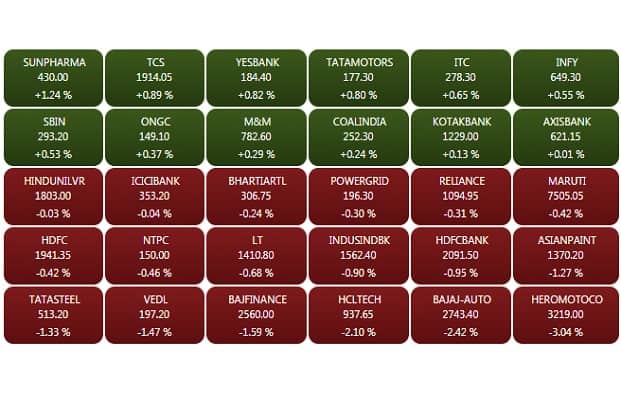 Shares of multiplex operators rose after the GST Council on Saturday reduce the tax on movie tickets to 18% from previous 28%. Cinema had remained part of the highest tax slab, wherein film tickets whose price exceeded Rs 100 were subject to 28% GST, while those below the rate worked with 18%, resulting in high ticket prices for movie-goers. PVR shares rose as much as 2.8% to Rs 1607.25, and Inox Leisure shares jumped 4.56% to Rs 249.90 per share.

Infosys shares rose as much as 2.02% to Rs 658.80 after the Times of India reported that the company is likely to consider a proposal for a second share buyback of $1.60 billion very soon to cheer up investor sentiments in which some founding family members could tener their shares.

Bandhan Bank shares fell as much as 3.15% to Rs 512 per share after it clarified that the bank was unaware of the news that it is in talks with HDFC for control of Gruh Finance. The bank also stated that it is evaluating various opportunities and will not comment on market speculation.

U.S. President Donald Trump’s Treasury secretary called top U.S. bankers on Sunday amid an ongoing rout on Wall Street and made plans to convene a group of officials known as the “Plunge Protection Team.” U.S. stocks have fallen sharply in recent weeks on concerns over slowing economic growth, with the S&P 500 index on pace for its biggest percentage decline in December since the Great Depression.

Mnuchin's calls come as a range of asset classes have suffered steep losseshttps://t.co/DBI8lGNWkv

Rupee trades flat against US dollar

After a blockbuster rally last year, smallcap and midcap stocks lost some of their sheen in 2018 as investors grappled with the effects of steep valuations, macro headwinds, moderating domestic flows and changes in regulatory norms—all of that in the midst of a liquidity crisis. The BSE midcap index slipped 14.42% while the smallcap index slid 24% in contrast to a 5% rise in the benchmark Sensex this year so far. Read more 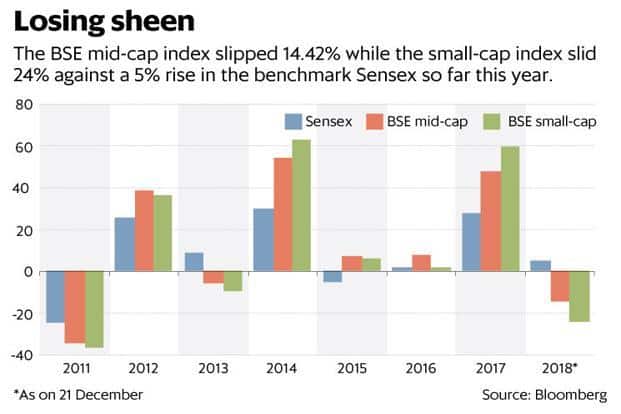 Oil prices dipped ahead of the Christmas holiday break, adding to last week’s steep losses on concerns about a global oversupply. International benchmark Brent crude futures fell 27 cents, or 0.5%, to $53.55 a barrel. Brent touched $52.79 on Friday, its lowest since September 2017. U.S. West Texas Intermediate (WTI) crude futures eased 8 cents, or 0.1%, to $45.51 a barrel. WTI hit its lowest since July 2017 on Friday at $45.13.Gold prices climbed, with investor appetite for risk curbed by worries over a partial U.S. government shutdown, Sino-U.S. trade tensions and faltering global economic growth. Spot gold had risen 0.4 percent to $1,261.47 per ounce. U.S. gold futures were up 0.5 percent at $1,264.1 per ounce.Metals: Shanghai metals prices generally eased on Monday amid ongoing concerns over global economic growth, although aluminium was steady following a proposal to further reduce China’s production capacity. The most-traded aluminium contract for February delivery in Shanghai was little changed at $1,986.30 a tonne. Reuters

Asian shares were mixed and US stock futures edged higher, while the yen advanced, as investors weighed news over the weekend that President Donald Trump has discussed firing Federal Reserve Chairman Jerome Powell as well as the impact of a partial U.S. government shutdown. Stocks slid in Hong Kong and South Korea, while shares rose in China and Australia.Australia’s S&P/ASX 200 Index added 0.3% as of 1:22 p.m. in Sydney. Hong Kong’s Hang Seng slid 0.8%. The Shanghai Composite advanced 0.3%. South Korea’s Kospi index fell 0.1%. Futures contracts on the S&P 500 rose 0.5%. The S&P 500 Index fell 2.1% on Friday, while the Nasdaq composite was off by 3% that day. Futures on the U.K.’s FTSE 100 Index lost 0.5%. Bloomberg