NCR and Mumbai will take 14 and 12 quarters, respectively, to sell existing units

A severe fall in sales has resulted in a huge inventory pile up with real estate developers. According to a report released on 28 January by property consultant, Knight Frank India, the National Capital Region (NCR) has 192,568 unsold residential units which will take approximately 14 quarters to sell (QTS); it means that if no further units are added, the current inventory will take 14 quarters to get sold.

QTS is a ratio calculated on the basis of average sales for the last eight quarters divided by the outstanding units on sale.

Mumbai has approximately 12 quarters of inventory, followed by Hyderabad with close to eight quarters and Pune, Chennai and Bengaluru with seven quarters each. “Ideally QTS ratio in a healthy market should be around six quarters," said Shishir Baijal, chairman and managing director, Knight Frank India.

Such inventory pile up is the result of poor sales despite a slowdown in the number of projects launched. According to the report, residential launches and sales were at a three-year low during the December quarter across the six tier-I cities. Project launches fell by 22% to 126,233 units in the second half (H2) of 2014 from 161,926 during the same period a year ago.

A report from another real estate consultancy, CBRE South Asia Pvt. Ltd, confirms this trend. It shows a residential sales decline of about 30% year-on-year (y-o-y) ending 2014 and new supply additions decline of about 25% over the same period.

When it comes to sales, NCR witnessed the sharpest fall in sales volume among all the six cities. Property sales fell by 43% y-o-y in NCR in 2014, followed by Hyderabad with 18%. Sales in Pune and Chennai declined by 10% and 14%, respectively, Mumbai by 9% and Bengaluru by just 3%. 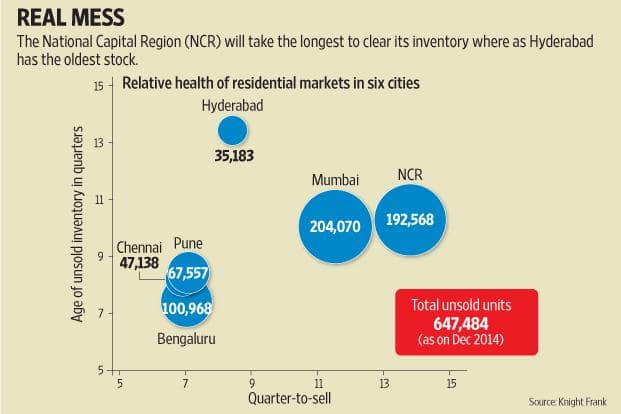 Despite sales volume remaining at an all-time low and inventory levels up, property prices in all the six cities have moved up. While Mumbai saw the maximum rise of 10%, NCR observed the least with 3%. “Increase in property prices is basically because of increasing inputs cost for developers," said Baijal.

Speaking about the findings of reports, Baijal said, “We expect 2015 to be the year of recovery and stabilization. The current economic indicators look positive, though the real effect will only be felt by the second half of this year."

Agrees Anshuman magazine, chairman and managing director, CBRE South Asia: “The fundamentals are in place for the global economy to move ahead in 2015. The factors most likely to affect the real estate market positively are stronger and sustained gross domestic product growth and more relevant reforms."

Knight Frank expects overall sales to be up by 4% during the first half of 2015 and a modest price rise across all cities during the same period.