The trouble with rising zinc prices

Hindustan Zinc Ltd’s investors may have mixed feelings about the increase in zinc prices. Since July, zinc’s spot price on the London Metal Exchange are up by 10%; in contrast, copper is down by 5.8% and aluminium is down by 4.8%. A repeat of the June quarter may be underway, when zinc prices rose by 12.8%, doing much better than the other two metals.

So why should Hindustan Zinc’s investors not be happy?

Every extra dollar of revenue per tonne adds to profits, other things being constant, and spot prices are up by $216 this quarter so far. The fly in the ointment is declining output. In the June quarter, its refined zinc metal output fell by 46% over a year ago. The company said this was part of its mining plan as it was shifting partly to underground mining, and that output will recover in the second half of FY17. This decline pulled down its performance in the quarter.

While it may have affected sales growth, the same decline may have also paid a role in the firming up of zinc prices. In the January-June period, overall global demand for refined zinc metal rose by a mere 0.6% but production declined by 4.2%, according to data compiled by the International Lead and Zinc Study Group. 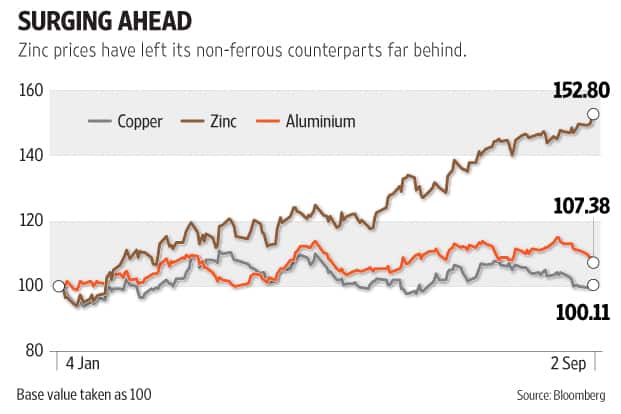 The drive to cut output has been a global one, as large companies have temporarily shuttered capacity in response to weak demand. The decline in India’s output was a main reason for the global decline.

The ILZSG reported that the global market in January-June 2016 was in deficit (when demand exceeds supply) by 138,000 tonnes over the same period a year ago. But the sharp increase in zinc prices has raised fears that companies may restart idled capacity. If that happens, prices could give away these gains.

A news report in the Financial Times quotes Glencore Plc chief executive saying they don’t want to be the one to bring new supply when the market does not need it. The company has idled 500,000 of zinc capacity in response to weak demand conditions. More support may come from China, whose government has asked zinc mines in the Hunan province in August to shut down till June.

Hindustan Zinc is better off when zinc prices are rising than falling as profitability is protected.

Although the company’s per tonne production costs have risen due to ongoing mine development, it should decline once output increases in the second half.

Higher output and the increase in zinc prices are a good combination but rising output may also test the resilience shown by zinc prices.

If idled global zinc output increases, that could add to supply pressures. Hindustan Zinc’s share has risen by 28% in the current quarter, due to the rise in zinc prices and expected output increase. The main risk is if rising prices tempt producers to bring back capacity back into the market.