Coal: from deficit to surplus?

While the govt's coal production target has been seen as 'ambitious', analysts foresee a 'surplus' situation if its targets are met over the next five years

The thrust on improving coal production is important given the fact that despite being one of the largest coal producers in the world, India continues to import the fuel to meet demand. For perspective—India’s coal consumption in fiscal year 2015 is estimated to be around 837 million tonne (mt), which was met by 595mt of domestic production and 242mt of imports, said IIFL Institutional Equities in a report on 1 June.

Of this, thermal coal power plants located away from the coast accounted for 84mt of imports while other industrial users imported 70mt of coal. The remaining 88mt of coal imports can be attributed to coking coal and thermal coal imported by coastal plants, which typically cannot be replaced with domestic production. 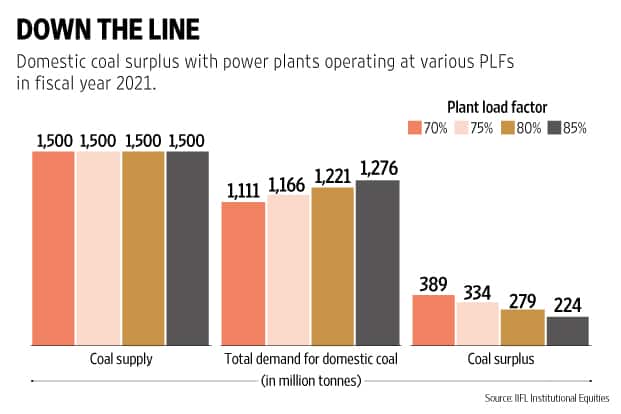 “We forecast that the best-case demand for domestic coal in FY21 would be 1.11 billion tonne assuming existing plants and upcoming thermal power capacities (84 gigawatt) will operate at 70% plant load factor (PLF)," pointed out IIFL. The calculations also take into account replacement of imported thermal coal with domestic thermal coal completely for non-coastal power plants and partially for other industries. Assuming the government achieves its target of 1.5 billion tonne, India could well end up with 389mt of surplus coal. The attached table shows coal surplus at different PLFs.

Of course, it is very possible that the actual coal production may fall short. But it is equally possible that coal demand may also significantly undershoot IIFL’s base case assumption. IIFL says power demand in the country may not support such an increase in power generation, adding, that even in case of some shortfall in coal production, compared with estimates, there is high probability of coal surplus in the domestic market.