If history is any indicator, a rally in non-ferrous metal prices is likely

Metal prices are influenced both by fundamental factors such as demand and supply, and also by global liquidity in the case of metals that are traded by investors. The fundamental situation for commodities is sobering, as slowing economic growth in both developing and developed market economies has dented demand.

But can a surge in liquidity change all that? Last week, the European Central Bank (ECB) cheered investors by writing out a blank cheque for European sovereign debt. Since 6 September, when ECB announced its decision to buy bonds without any limit, copper, zinc and aluminium have all risen by 5-6%.

This week, there is speculation that the US Federal Reserve may announce a third round of quantitative easing (QE). If announced, chances are it may spark off a rally in both financial and commodity markets. If history is any indicator, a rally in non-ferrous metal prices is likely.

From the start of the first QE in December 2008 to the end of the second QE in June 2011, aluminium prices went up by 72%, copper by 201% and zinc by 121%. And, the periods following the end of each round of easing have seen them lose steam.

There is a risk that slowing demand for metals due to the economic slowdown may act against rising commodity prices. But a tightening of supply, too, supports stability in prices, as miners that had planned significant capacity expansion on the back of the steep run-up in prices, have become cautious. They are postponing projects, shutting down production where it appears unviable, and, in effect, tightening the supply side to minimize the mismatch with demand. In a recent presentation, BHP Billiton Ltd said that based on its demand forecast for copper, between 2000 and 2020, availability of low-cost supply appears to be a problem. This should keep a floor under copper prices. But the same can’t be said of aluminium, where the supply situation appears comfortable. That also explains why large aluminium producers are eliminating unviable capacity. 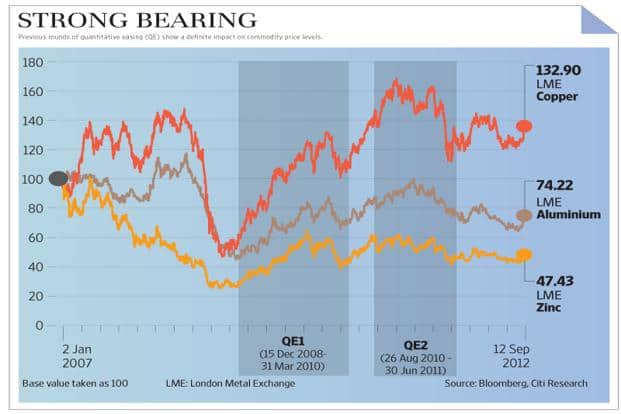 Note that these are long-term fundamental scenarios, and when money gushes into the system, they are relegated to the background. Often, entire asset classes get lifted, some more than others and short-term factors will get more importance in such a situation. It may also result in price behaviour that is out of joint with the longer-term outlook.

Rising commodity prices are good for producers, but for countries such as India, which rely on domestic consumption, it is a headache. Crude oil prices have already reversed their decline, and if metal prices jump as well, India’s inflation could increase. Rising costs at a time when growth is slow and interest rates are high is not good for companies, even if their investors are cheered by a momentum-driven rally.