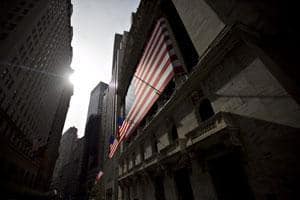 Stocks lost ground following Bernanke’s comments a day after experiencing the best one-day rally so far this year. Over the previous three days, the S&P 500 gained 2.9%, recovering some of May’s losses.

Speculation has been rising that central banks will take more action to combat escalating debt problems in Europe and slower global growth. Bernanke, in testimony Thursday, said the Fed was ready to take action but gave no hint of imminent steps.

His remarks were seen as offsetting more supportive comments from other Fed members in the last 24 hours, but still leaving the door open for more action at the Fed’s next meeting on 19-20 June.

“Bernanke threw traders a curveball. After his vice chair made it seem like QE was a foregone conclusion, he really messed people up. We tried to shake that off, but there was a lack of follow-through and we lost momentum," said Phil Flynn, senior market analyst with PFG Best in Chicago.

The rate cut in China, the world’s No. 2 economy, helped lift the stocks of US companies linked to China’s commodity-hungry industrial complex.

US stocks jumped more than 2% on Wednesday, a third day of gains for the S&P 500. The index has rebounded since hitting its 200-day moving average, a key technical support level, last Friday.

While Europe was still very much in the spotlight, stocks showed little reaction to a downgrade by Fitch in Spain’s credit rating to ‘BBB´ with a negative outlook, just two notches away from junk status.

Among the day’s decliners, shares of Navistar International Corp dropped 14.3% to $24.11 after it posted a second-quarter loss, due to a big charge for warranty costs to repair engines built in 2010 and 2011. The truck maker also cut its full-year earnings outlook.

On the Nasdaq, shares of Nvidia fell 4% to $11.89 after FBR cut its price target on the company.

Volume was above average. About 7.16 billion shares changed hands on the New York Stock Exchange, the Nasdaq and Amex, compared with the year-to-date daily average of 6.85 billion shares.

Decliners beat advancers on the NYSE by about 16 to 14. On the Nasdaq, about three stocks fell for every two that rose.