Home / Opinion / Rate cuts on course, but banks still need the Rajan push
Back
Share Via

A policy rate cut is effective if banks lower or raise rates in tandem with the central bank actions. Lower policy rates should translate into lower bank rates for borrowersretail and corporate.

An informal poll in the Mint newsroom in Delhi, moments before the credit policy announcement on 29 September, had a rare consensus—he’ll go for 50! We were predicting the quantum of the cut on the three rates announced by the central bank that are linked to each other. With the market expecting a 25-basis point cut, to have done a 25 would not have caused a ripple. So, gut feel said that to make an impact, Reserve Bank of India (RBI) governor Raghuram Rajan will go for 50. The RBI did cut the repo rate by 50 basis points to 6.75%, and this drags down the reverse repo (the rate at which banks lend to the RBI) down to 5.75% and the bank rate to 7.75%. One basis point is one-hundredth of a percentage point. For those not watching the tickers and wondering why the rate cut was national breaking news, here’s a quick snapshot of why the RBI rate announcement is important.

The repo rate is the rate at which banks borrow from the central bank. A cut in the policy rate is a signal for an overall lower interest rate regime. Borrowers will pay less and depositors (these are the creditors to banks) will get less due to lower deposit rates. When inflation rates are high, the central bank keeps policy rates high to mop up the extra money in the system that is causing the higher prices. When inflation is under control, policy rates fall. I think the mild hysteria before today’s rate cut was due to the market looking for an all-is-well signal from the RBI. Markets have been falling over the past few months, responding to global events and an uncertain economic recovery in India. Markets were looking at Tuesday’s policy statement as an internal audit of the RBI on India’s economic situation regarding the future of inflation and growth. The higher-than-expected rate cut, carried out by an inflation-targeting central bank, means that inflation is finally under control and growth prospects are looking up.

The buzz word today is ‘transmission’. A policy rate cut is effective if banks lower or raise rates in tandem with the central bank actions. Lower policy rates should translate into lower bank rates for borrowers—retail and corporate. Cheaper loans may induce citizens to buy more homes, cars, holidays and give the manufacturers of these products and services more business. Lower rates will make it cheaper for companies to access working capital and funds for projects. Why then is the RBI governor stressing that banks must pass on the full 125-basis-point cut carried out by the central bank since January 2015? It’s because banks have been less than enthusiastic about reducing rates as policy rates softened. State Bank of India (SBI) responded to the Rajan push and reduced its base rate by 40 basis points on Tuesday, soon after the policy announcement. Others are expected to announce similar cuts soon.

But the issue remains. As borrowers on account of home loans, we have seen that banks don’t reduce rates as fast as they raise them when the interest rate cycle moves up. The SBI base rate, for example, moved up very quickly from 7.5% to 10% over a year when rates were going up in 2010 and 2011. But it has remained sticky around that level, well after the rate regime softened. For comparison, look at the way the Mibor (Mumbai Interbank Offer Rate—the overnight rate at which banks borrow from each other) and repo rates have behaved over the past five years (see graphic). An interest rate that floated against a market determined benchmark, and not one controlled by the bank, would have floated down much earlier, thus ‘transmitting’ the rate cuts. The RBI recognizes that any rate controlled by the banks will make rates sticky upwards and has put in motion the process of changing the way banks calculate their base rates. The draft guidelines for banks on computation of base rates, based on their marginal cost of funds, are open for comments. These will be issued by end-November 2015. Any formula that leaves control with banks will cause rates to remain sticky upwards. The RBI must think of making the benchmark market-determined and then allow banks to price loans in relation to it.

The RBI also needs to look into the practice of home finance companies associated with banks that continue with a different way of pricing loans. For a home loan seeker, it is the bank that initiates the relationship. It is a mixture of tricks and traps that induces the borrower—who is battling bigger rogues called developers and still trusts her bank—to sign without looking carefully. If she had, she may have seen that the loan was from the sister housing finance company (which comes under a different regulator and, hence, a different set of rules) and not the bank. The impact of that small oversight and the trust in the bank come home when the overall rates are falling and you remain pegged to a much higher rate. 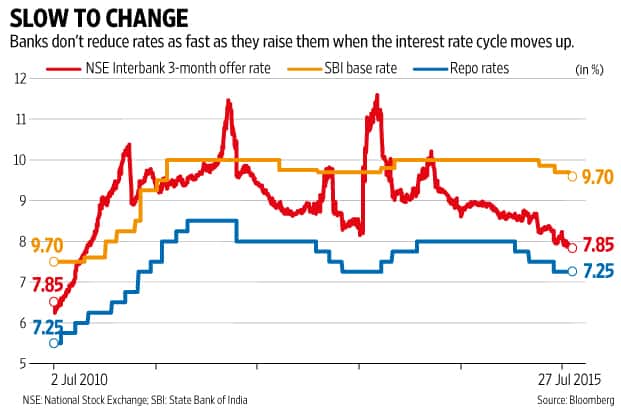