How payment banks will affect traditional ones

But the gains were short-lived in a weak market, underscoring their knee-jerk nature. Nevertheless, while the road ahead is full of uncertainties, the fact remains that the RBI approval for setting up payment banks will pave the way for financial inclusion through a combination of branches and digital platforms.

What will be the impact on universal banks? The impact on private sector banks will be minimal because they have already made strong investments in technology. Also some of the private sector banks like Kotak Mahindra Bank Ltd, Yes Bank Ltd and ICICI Bank Ltd have tied up with some of the companies that have got approval for setting up payment banks and hence will not be affected much. Large public sector banks have also tied up with or will very probably tie up with entities that have received payment bank approval. That is why RBI governor Raghuram Rajan, in an interaction with State Bank of India chairperson Arundhati Bhattacharya on Thursday, made light of the threat to big banks from payment banks, and said instead they could act like feeder banks and make the larger banks more competitive.

But there could be an impact on small and medium public sector banks as incremental deposit growth and market share will see some impact from payment banks, especially in the rural and semi-urban areas. Remember, public sector banks are also seeing their current and savings account (Casa) deposit share slowing and have a huge pile of bad debts, which is affecting their profitability and ability to grow. 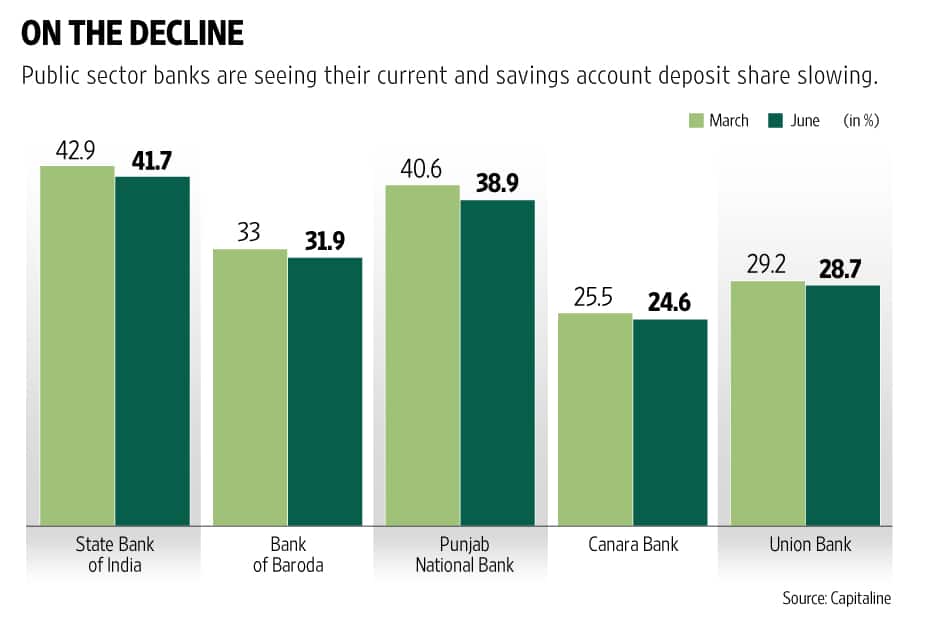 There could also be pressure on public sector banks’ deposit franchise from India Post, which has received payment bank approval. India Post’s reach, with 139,000 post offices, significantly exceeds the number of bank branches at around 44,700 in rural areas. Since payment banks are allowed to take deposits up to ₹ 1 lakh, public sector banks could lose out on customers who might open savings accounts with the post office.

Post offices have long been trusted for long-term deposits and by offering Casa deposits, they could potentially cannibalize public sector banks’ Casa share in rural markets, which makes up around 90-95% of the Casa deposits, according to a Nomura Global Markets Research note dated 19 August.

India is far from being the only country where technology armed with financial apps is challenging traditional banks. In China, mobile apps have mushroomed and have started threatening the backward and inefficient traditional banks, so much so that many customers have switched directly from cash transactions to banking through mobile apps.

Moreover, mid and small public sector banks could also lose out from business correspondents (BCs). Payment banks are permitted to collect deposits through branches or BCs. FINO PayTech Ltd is one of the largest BCs to get a payment bank licence. With an established rural network, it will create strong competition for public sector banks in rural areas.

Besides the threat to deposits, competition for state-owned banks will intensify as payment banks, which are backed by digital platforms, adequate capital, zero legacy issues, and low-cost innovative and convenient services, will compete heavily for liabilities in rural and semi-urban areas. There could be a loss of market share in payment transactions and government transfers too, said CLSA in a report dated 20 August.

In fact, competition from here on is only going to get tougher. RBI is going to announce small finance banks soon and is currently evaluating around 70 applications. That means, in the longer term, some of the smaller public sector banks may remain under pressure, particularly those that are strapped for cash and cannot participate fully once a full-fledged recovery happens.