With barely a month left for curtains to come down on fiscal year 2017, it looks like the roads sector is unlikely to meet targets again. The tally for the nine months ended December 2016 portrays a marginal fall in projects awarded in the sector compared to a year ago.

This is not good news given that roads have been the backbone of infrastructure activity in the country, and in turn, drive other sectors like construction. Besides, the sizeable budgetary allocations by the government for roads painted an optimistic picture, although those hopes may now be belied.

A 28 February report by Jefferies India Pvt. Ltd says the National Highways Authority of India (NHAI) and the ministry of road transport and highways had awarded road projects of about 3,200km and 3,100km, respectively, till mid-February. Note that NHAI had watered down its forecast for FY17 from 10,000km to 6,700km. Even then and assuming that the March quarter is one where the highest quantum of projects are awarded out, even reaching the revised target looks to be an uphill ride. 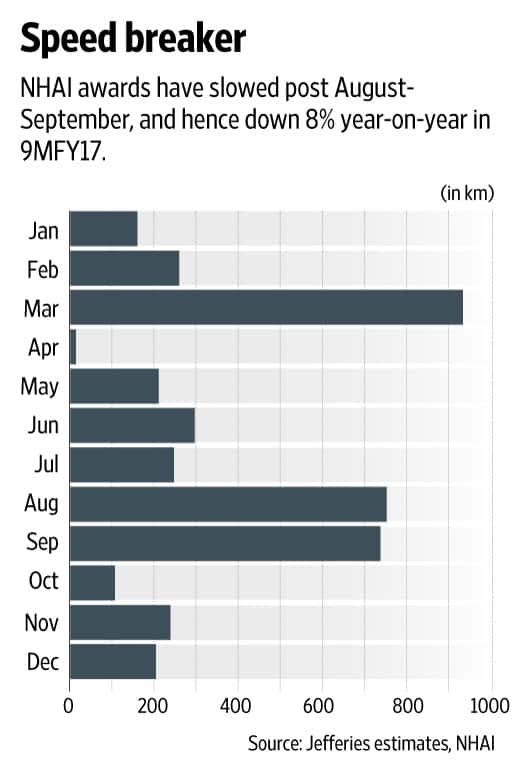 While firms have hastened execution, the 41km/day completion target is too ambitious given that the current run rate is around 17km/day.

One of the reasons is land acquisition hurdles, due to which orders are not rising quick enough to achieve milestones. Secondly, financial closure is still difficult. Some industry sources say that while the new Hybrid Annuity Model (HAM) has many takers due to public-private participation, lenders are not yet forthcoming given the travails of the past projects that turned liabilities. The Jefferies report also clarifies that only 15 of the 35 projects awarded under the HAM model have achieved financial closure and some have even been cancelled.

That said, the financial health of most firms has improved after being caught in a debt trap for almost a decade. “Developers with sound balance sheets and operational projects have gained from improved traffic and revenue growth in the recent past," says Sushmita Majumdar, director at Crisil Ratings.

Meanwhile, the note ban adversely affected revenue for road developers as toll payments were waived for nearly half of the December quarter. It may be a while before the compensation promised by the government fructifies, and annual projections on revenue and profit may be impacted.

In sum, both NHAI and the road ministry hold the key to put the sector on fast track. Else, it will continue to be a case of missed targets and lost opportunity in infrastructure.