If Axis had diligently followed the RBI's asset classification norms, as much as 24% of its $565 million profit for the last full year would have vanished into thin air.

On Tuesday evening, the Indian lender reported that the central bank wasn’t happy with its classification of nine large corporate accounts as standard assets. As a result, the non-state-owned bank, the country’s sixth-largest by market value, has decided to rebrand the entire $750 million as nonperforming.

It’s the second time this year that Axis has had to bump up its bad-loan count under pressure from the Reserve Bank of India. In May, it reported a previously undisclosed soured asset of almost $1.5 billion. That time around, it wasn’t the only financial institution to try and hide a bad egg. ICICI Bank Ltd. and Yes Bank Ltd. made similar disclosures, prompting me to coin a new metric to value Indian banks: the price-to-truth ratio. If Axis had diligently followed the RBI’s asset classification norms, as much as 24% of its $565 million profit for the last full year would have vanished into thin air. (The lender’s shares plunged as much as 9.4% on Wednesday morning.) Even now all Axis has to say in its defence is that it’s not the only one lying: Most other banks that have exposure to these nine firms, which include three unidentified power producers and one steelmaker, are also carrying the advances as standard assets on their balance sheets.

What makes this new mea culpa all the more galling is that just three months ago, CFO Jairam Sridharan was busy telling the world that credit costs, which had risen from an annualized rate of 1.73% during the March quarter to 1.95% in June, had only inched higher because of a seasonal blip. He said things were looking so under control management might even consider paring its guidance of 1.75% to 2.25% in full-year credit costs. (Axis’s fiscal year runs from April to March.)

Just as he was making that cheery prognosis, shareholders came to know Axis had reappointed CEO Shikha Sharma for another inning, giving her a clear runway until 2021. The board announced its decision with almost a year to go in Sharma’s current term because there was speculation she might leave for the Tata group.

Would that have been such a bad thing? Sharma, who came to the bank as CEO in 2009, has overseen shareholder returns of 252%, less than the country’s Bankex index at 270%. On her watch, $250 million of bad loans has swelled to more than $4 billion, even as total assets merely tripled. 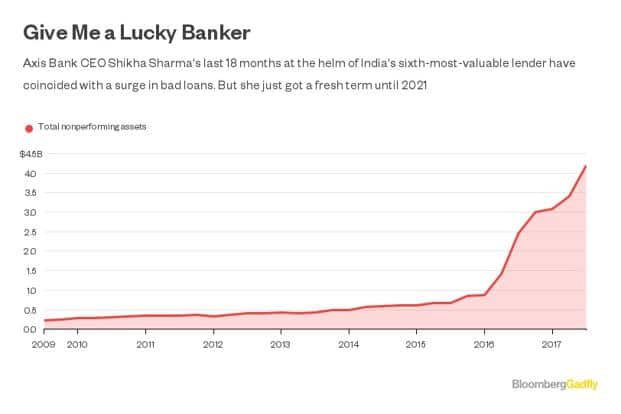 Now, after the September quarter, annualized credit costs have ballooned to 3.16%. That includes a 1.42 percentage point bump due to the $250 million provision management had to make after the central bank caught its lie. As for that full-year credit-cost guidance, which the CFO was planning to lower in July, it’s now been raised to between 2.2% and 2.6%. Whichever way you look at it, the failure of governance at Axis is now absolute. That other banks will also be admitting to having similarly lied about their nonperforming loans can’t be an excuse.

If the non-executive directors of Axis, including the former bureaucrat who chairs it, feel even a modicum of responsibility toward shareholders, they should quit, and leave it to a new board to deal with management and its fibs. Bloomberg Gadfly