How much cash leaves India?

How much cash leaves India?

Global Financial Integrity (GFI) recently published a report titled Illicit Financial Flows from Developing Countries: 2002-2006 as part of a project financed by the Ford Foundation. This report, which was well received by academia, governments and non-governmental organizations, came to be widely discussed in the Indian media. The report found that black money to the tune of $22.7-27.3 billion a year has been leaving India over the five-year period, 2002-2006. It should be noted that even the upper range of GFI’s estimates likely understates the outflow of black money from India. After all, economic models cannot capture all the channels through which money can be transferred illegally out of a country. A few examples will suffice. It is well known that illicit hawala transactions are an important way by which residents can swap the rupee for foreign exchange. A US state department report estimates that hawala transactions in India range between $13 billion and $17 billion annually, and present a security threat to the country. Neither can economic models capture the outflow of black money as in a courier’s cross-border transfer of foreign exchange in a suitcase. 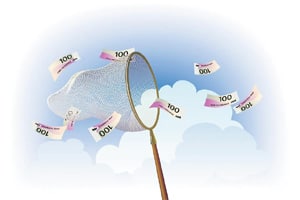 Economists capture the outflow of black money in two ways—by estimating outflows that are unrecorded in the country’s external accounts and the ways through which residents can accrue foreign exchange abroad by under-invoicing exports and over-invoicing imports. Both these models can show illicit outflows as well as illicit inflows. Traditionally, economists have tended to take the direction of flows as they are and simply netted out inflows from outflows in a straightforward manner. However, we found the traditional method wanting in a number of ways. First, it generated large swings from net outflows of black money to net inflows for a large number of countries, whereas one would not expect such outflows to simply turn around without supportive economic policies or a decline in pervasive corruption. That’s not how black money behaves in real life. Second, the traditional method also generated some strange regional patterns such as Africa being a net receiver of about $12 billion annually in black money. This result is absurd because if there were indeed illicit inflows of that magnitude, Africa would not have required official development assistance of just $2.5 billion in total for the entire five-year period, according to the Organisation for Economic Co-operation and Development. We, therefore, rejected the traditional method in favour of an approach that looks at outflows and inflows for a country in a much more realistic way.

Instead of taking an “automatic" net position with regard to inflows and outflows in each year, the GFI method looks at how illicit flows behave over the entire five-year period and includes only those outflows that are sufficiently large. According to the GFI approach, illicit flows must meet certain criteria—they must flow out of a country in a persistent manner (at least three outflows within a five-year period) and outflows must be large enough to rule out data problems. Both conditions must hold simultaneously for each country. Even though, as a result of these conditions, GFI’s estimates of illicit flows from developing countries are quite conservative, they have now come to outstrip official development assistance by a factor of 10:1. If for every dollar in official development assistance, an amount of $10 leaves a developing country through the back door, it is time that both donor and recipient countries adopt policy measures to address the serious long-term implications for poverty alleviation.

We are now studying the absorption of these illicit outflows into offshore financial centres (OFCs), tax havens (most of which are also OFCs), and traditional onshore banks. Available data suggests that deposits in OFCs have been growing very fast; external deposits in the Cayman Islands alone, the largest OFC, has grown from $722.6 billion at the end of 2002 to nearly $2 trillion by the end of the first quarter of 2008—before coming down to $1.7 trillion by the end of third quarter 2008 as a result of the global financial crisis. While all these deposits are not necessarily illicit, a substantial proportion are, given that large transfers of private capital in contravention of foreign exchange controls (which are prevalent in many developing countries) make those transfers illicit. The stock of illicit money worldwide is huge, given that the Cayman Islands is just one OFC out of a conglomeration of financial institutions engaged in that business. This means that national governments and regulatory agencies of developing countries would not only need to adopt policy measures to stem the outflow of black money, but the Group of Twenty as well as international regulatory agencies would also need to make the absorption of black money much more difficult.

Dev Kar is lead economist at Global Financial Integrity, Washington, DC and a former senior economist of the International Monetary Fund. Comments are welcome at theirview@livemint.com