What to do with Kasab

What to do with Kasab

Should Mohammed Ajmal Kasab get a fair trial? Many feel this terrorist, who was trained in Pakistan and who went on a ruthless killing spree in Mumbai, does not deserve legal representation. An organization of local lawyers in Mumbai has asked its members to not take up his case. Political parties have stepped up pressure on lawyers who have even hinted at representing Kasab in court. That is unfortunate. 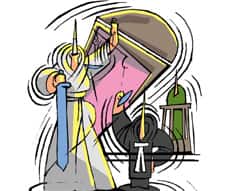 But the government will need a coherent strategy on how to fight the case and how to manage public relations. Public scepticism is rampant because such trials can go on endlessly. There is yet no firm decision from the courts on the Mumbai bomb blasts of 1993. The Supreme Court had sentenced Afzal Guru to death in 2004 for his role in the attack on Parliament in 2001. That decision was stayed and his clemency petition is still lying with the President.

It is because of precedents such as these that demands for quick justice in the Kasab case are so strong. It is thus important that the case should not stretch to eternity. One option is to keep the number of charges against him manageable, so that the judges can decide soon. The other charges can be pursued later. An omnibus charge-sheet may be convenient, but can be a strategic mistake.

Then there is the matter of handling public relations. The Kasab trial will surely attract international media attention. There is a strong possibility that Kasab will use the platform to play on sentiments, or raise issues such as Kashmir or the Gujarat riots. A clear policy of media briefings will need to be charted out.

India can learn a lot from the case of Adolf Eichmann. The Israelis kidnapped this Nazi from Argentina in 1960. They gave him a proper trial in Jerusalem; it began in April 1961 and ended in December. Eichmann was hanged in 1962. Newspaper articles helped refocus attention on the atrocities of Adolf Hitler’s goons. The Kasab trial, too, should be swift and a chance to build international support against the menace of cross-border terrorism.

What should be done with Kasab? Write to us at views@livemint.com