The true extent to which the growth potential of the Indian economy has been damaged is evident in a chart published by the Reserve Bank of India (RBI) in its economic review that was released this week. The chart has been reproduced here.

It uses a standard statistical tool called the Hodrick-Prescott filter to calculate the trend in economic growth, which also gives us some idea of how rapidly the Indian economy can grow without generating high inflation.

The chart shows that the growth potential of the Indian economy is back to its level way back in the first quarter of 1997. It is close to 5%, or nearly 3.5 percentage points lower than its peak during the economic boom. Naveen Srinivasan, a professor of economics at the Indira Gandhi Institute of Development Research in Mumbai, wrote in this newspaper on Tuesday that other statistical techniques suggest that “our estimates of the trend growth rate of output could be as low as 4.5% today". 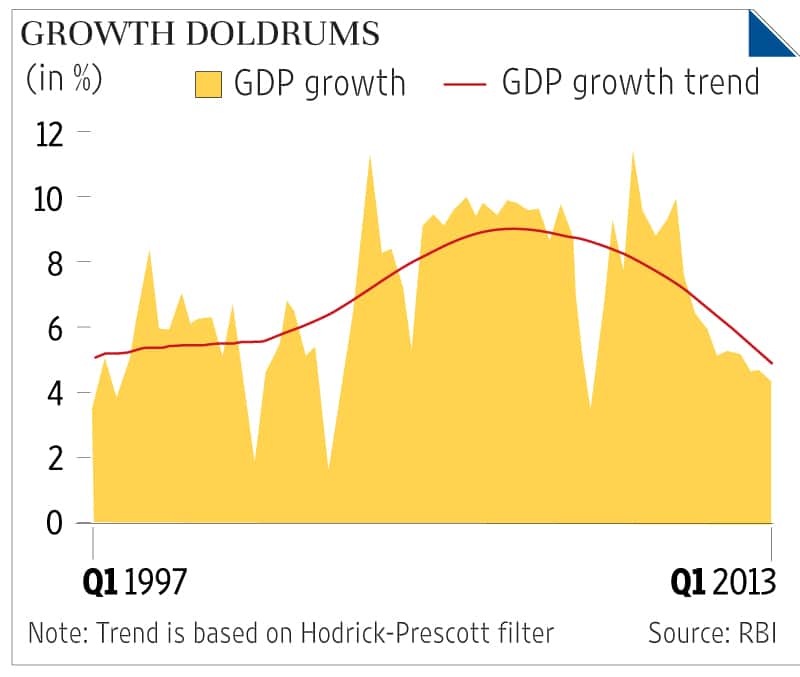 The gap between potential and actual growth—what is called the output gap—is now only modestly negative because potential growth has fallen so sharply in recent quarters. That is why the current slowdown has not been disinflationary. Compare this with the situation a decade ago: the Indian economy was growing at a sluggish pace even then, but inflation was low and the current account was in surplus. The reason: there was a large negative output gap.

The blame for this unholy mess has to be laid at the door of the two Manmohan Singh governments, which till recently behaved as if the Indian economy was destined to grow rapidly because of which the only concern seemed to be how rising tax revenues should be spent.

There were two important policy errors that have brought us to this point. The lack of economic reforms has pulled down the potential growth rate while the large demand stimulus after 2009 has fanned inflation.

The Indian central bank compounded the problem by being behind the curve after the economy bounced back from the effects of the global economic crisis. Wholesale price inflation peaked in March 2010 while policy rates peaked only in October 2011.

This column had warned in November 2011: “India needs more investment at this stage of the business cycle. What we are getting instead is more consumption spending by the government. The result: slowing growth and persistent inflation… The flaw is not just economic. It reflects a fundamental problem in the political strategy of the UPA," (Cafe Economics, UPA’s Perverse Strategy, Mint, 8 November 2011).

If the story has to be told in one sentence, it is this: demand was stimulated while supply was choked.

The Indian central bank has done well to do some plain talking this week. It has warned that India could face “a lasting growth collapse" unless macroeconomic stability was secured. RBI has pointed out that high inflation has already had several malign effects: it has eroded real consumption, widened the current account deficit and hurt the poor. The tightening of monetary policy in recent weeks makes sense despite the slowdown precisely because India cannot regain its lost growth momentum on a sustainable basis unless inflation is first tamed.

There are some who argue that high-growth economies tend to have higher inflation, which is tolerated by electorates as long as wages grow faster than prices. One example: Indian rural wages grew faster than food inflation in recent years, but now show signs of faltering. Yet, a look at the data shows that most countries that have seen growth miracles since 1960 have had moderate inflation: Japan, China, Thailand and Malaysia, for example. The one big example of a country that sustained high growth despite high inflation is South Korea. For instance, consumer prices in South Korea grew at double digits in 18 years of the 22 years from 1960 that saw its economy roar ahead.

Has irreparable damage been done to the Indian economy? It is hard to say for sure, but it is worth looking at the growth trend over several decades. India experienced a structural break in its growth trajectory around 1980. The average growth rate in the past 33 years has been 6.89%, or around two percentage points higher than the current growth rate. Two things are worth remembering in this context. First, the high average growth rate since 1980 has been sustained over several economic cycles. Second, India has far higher rates of savings and investment now than it did through most of the period since the growth acceleration began. These two factors offer some hope.

However, the recovery is unlikely to be automatic. The next government in New Delhi will have to stick to the basics if growth is not to collapse further: revival of the investment cycle, fiscal consolidation and structural reforms.

Niranjan Rajadhyaksha is executive editor of Mint. Comments are welcome at cafeeconomics@livemint.com