Ilive in two parallel culinary universes. In one, I spend abnormal amounts of time thinking about or making cake, biscuits and bread. The other is where I tramp around the back alleys eating street food, pestering vendors for recipes in a bid to replicate the dishes at home. Occasionally the two worlds collide and today’s recipe is a good example. Pav bhaji, beloved snack of millions of Mumbaikars, is one of my favourite street foods but I only like it with the pukka soft, pillowy pav available in Mumbai and Goa. The pre-packed pav available in shops in Delhi just won’t do.

I recently came by a great recipe for vegetable bhaji but have yet to find someone to share pav know-how, despite repeated stalking of bakers in Goa and on the Konkan coast. Then, on a recent trip back to Scotland, I had a thought. I realized that pav, despite its Portuguese heritage, is almost identical to what we call “morning rolls", the vehicle for our so-good but definitely artery-clogging “bacon butties". All I had to do was find a recipe for morning rolls and I could be serving up pav-bhaji brunches in no time. 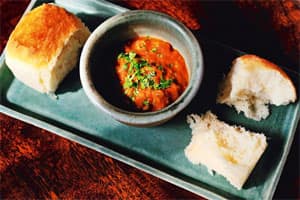 Scottish Morning Rolls, the softest, fluffiest of breads, were once made in every home for breakfast and traditionally known as baps—possibly, the author suggests, “an analogy with pap, the mammary gland, on account of its shape and size". I see no good reason to deviate too far from McNeill’s recipe, except to bring the measurements up to date and introduce fast-action yeast. And, of course, to point out that the bap does a great impersonation of pav.

150ml of cold whey—I always have whey in the kitchen from paneer-making but if you don’t, use water

In a large bowl, mix together the flour, salt, sugar and yeast. Add the butter and use your fingertips to blend it into the flour mixture. Pour in the milk and whey/water mixture and mix to form a rough dough. Cover the bowl and leave for 10 minutes in a warm place (not too difficult to find at this time of year in India). After 10 minutes, you will see that the dough has already started to seem more elastic—the yeast has done its work without any arm-numbing kneading.

Take the dough out of the bowl and knock the air out, then cut into 12 pieces. Knead each piece into a smooth ball, then place in a lightly oiled tin. Cover again and leave until the pav have doubled in size—this will vary according to how warm your kitchen is. The pav would have stuck together as they expanded. Brush the tops of the pav with a little milk.

Preheat the oven to 220 degrees Celsius. Bake the pav for about 15 minutes until the tops are brown. Let the pav cool slightly before tearing into them.

Baps/morning rolls/pav don’t keep well. They’re at their best soon after they emerge from the oven so make sure your bhaji or vada is ready and waiting.

Pamela Timms is a Delhi-based journalist and food writer. She blogs at Eatanddust.com