The immensity of the job creation problem in India

Both across states and across districts within each state, this is a wide, and widening, disparity in economic activity across regions

Amidst all the recent furore on job data, and what they do and do not mean, we have perhaps lost sight of a more basic fact: that India, in many ways, remains a “dual" economy, with wide (and burgeoning) disparities between an urbanized modern sector and a lagging rural hinterland. While it has become fashionable to argue that the old, hackneyed distinction between “India" and “Bharat" has now become irrelevant, with everyone converging towards the same modernity, the reality is that the gulf between the two—in economics and geography, if not necessarily in culture—is as stark as night and day. Indeed, this is almost literally true, as we shall see in a moment.

The spatial dimension of economic disparity in India is well documented, including in my joint research with Praveen Chakravarty, published in these pages and elsewhere. In developing our research results on intra-(as opposed to purely inter-)state income inequality, we had to reckon with the paucity of reliable district-level data on economic activity. Our solution was to deploy a novel dataset of “nightlights" luminosity, generated by satellites of the US National Aeronautics and Space Administration (Nasa). At the IDFC Institute, we developed a statistical concordance between Nasa’s India-wide nightlights data and the map demarcation of districts, allowing us to develop a unique “panel" (that is, both cross-section and time-series) data set of luminosity values, by district and over time. 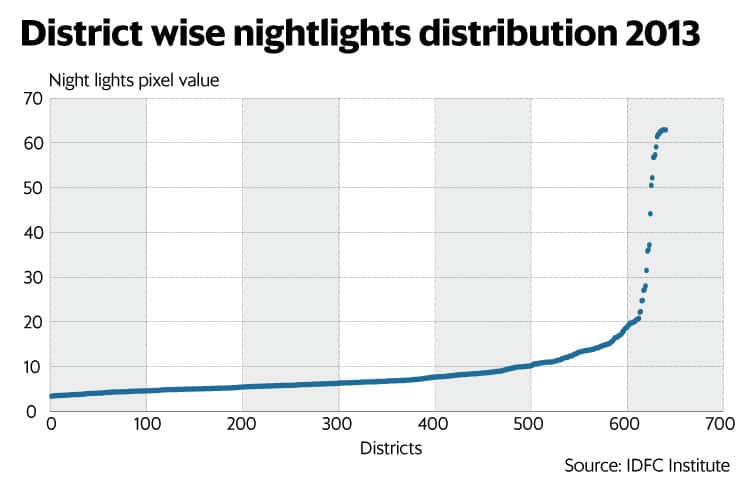 The chart shows this data for 2013 and reveals a very stark picture indeed. Note that we have arrayed districts from the lowest to the highest luminosity on the horizontal axis, with the corresponding luminosity levels on the vertical axis. (For the statistically-minded, this is therefore a “density" function of luminosity over districts.) The luminosity is essentially all but flat at a very low level and then turns up sharply towards the very end, becoming almost vertical. There is then a further flattening at the very top, disguised somewhat in the data by the fact that luminosity levels are top-coded. The data, therefore, clearly has an S-shaped or “logistic" distribution.

Put in simpler and starker terms: Most of India is virtually dark at night, with a few bright spots representing the major cities. This is a reality worth recalling at a time when the government claims credit for having electrified the very last village—a process well in train under the previous government, when our last data was captured in 2013. Electrified in theory most of the rural hinterland may be, but it is not emitting terribly much light at night—suggesting that the levels of economic activity in these regions remain low as compared to the dynamic metropolitan areas.

The other relevant context here is the jobs debate, in which the government and its critics debate whether India produced 15 million jobs last year or only one million or some number in between. Whatever the truth, India remains a dual economy in the sense of the late Nobel economist Sir W. Arthur Lewis, in which a rural hinterland living under subsistence conditions provides labour — in “unlimited supplies", in Lewis’ famous phrase—to an expanding urban, capitalist sector.

This reality also speaks to the parallel debate on the number of people entering the workforce every year— is it 12 million, as typically asserted, or a somewhat smaller number, as argued recently by economist Arvind Panagariya? Whichever the case, the truth is that the concept of the number of people entering the labour force every year is notional at best—a far larger number of people remain parked in unproductive agriculture, waiting to make the transition to more productive manufacturing or service sector economic activity if the opportunity arises.

The last element that must be stressed is that there is an important spatial dimension to the dualistic economic structure that the luminosity data reveals. In other words, both across states and across districts within each state, this is a wide, and widening, disparity in economic activity across regions. No, it is not that the rich get richer while the poor get poorer, but that the poor are not getting richer fast enough to close the gap with the already rich.

In the context of our federal polity, this regional dimension to income inequality — as opposed to the classical notion of inequality in the personal distribution of income and wealth—creates the possibility, not only of social disharmony, but of political discord, as populous, poorer regions attempt to extract greater redistribution from less populous, richer regions —whether within or across states.

The policy challenge is immense. The moral imperative, captured by that large area of darkness on the map, is equally daunting.