The roots of the current banking crisis

The roots of the current crisis in our banks lie in the great boom of 2003-08, which was then prolonged in India by a fiscal and monetary stimulus

The seeds of every bust are sown during the heydays of a boom. The same goes for financial frauds and embezzlement. As Charles Kindleberger, celebrated author of the classic history of financial crises declared in Manias, Panics and Crashes, “The propensity to swindle grows parallel with the propensity to speculate during a boom... the implosion of an asset price bubble always leads to the discovery of frauds and swindles." The roots of the current crisis in our banks, therefore, lie in the great boom of 2003-08, which was then prolonged in India by a fiscal and monetary stimulus. The following five charts tell the story: Consider Chart 1, which shows bank credit as a proportion of gross domestic product, or GDP. The chart shows that from 1991-92 to 2001-02, or the first decade after economic liberalization, the bank credit-to-GDP ratio expanded from 19% to about 25%. In the next decade, that includes the boom period and the fiscal stimulus that followed, this ratio more than doubled from 25% to 52%.

Also Read:PNB fraud: Where does the buck stop?

The percentage by itself is not very high—indeed, China’s bank credit to GDP ratio is three times as much. But the point is the rapid rate of credit expansion during the boom period. This is perfectly normal, as credit is needed to fuel the boom. The credit cycle expands with the business cycle and collapses with it. 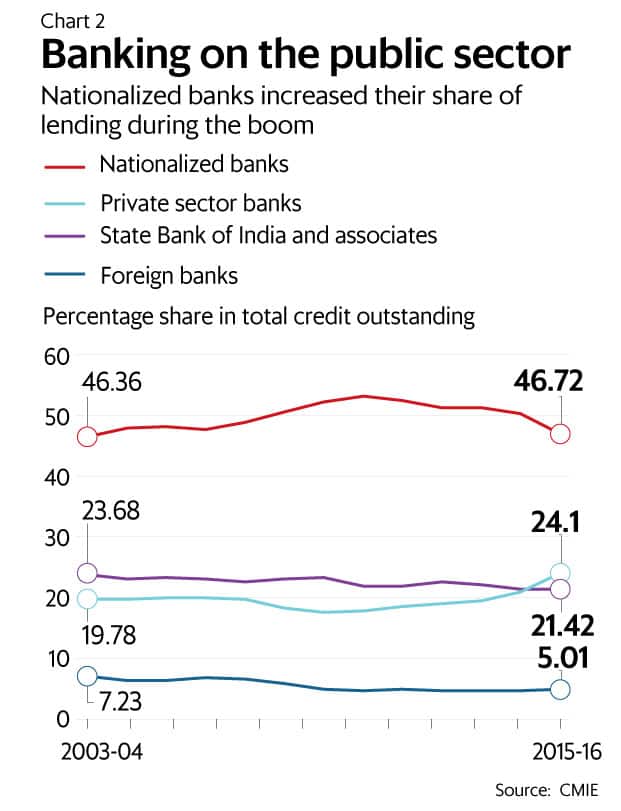 Which bank groups were lending the most during the boom years? Chart 2 has the answers. While the share of private banks in total bank credit was more or less the same in 2003-04 and 2013-14, the share of nationalized banks went up sharply during the period, especially after the global financial crisis. Those loans are now coming home to roost. Private sector banks, as a result, are now increasing their market share.

This fiscal push to growth, together with the Reserve Bank of India’s (RBI’s) loose monetary policy, led to rampant inflation, which was exacerbated by a steep increase in the price of crude oil. Prices for industrial inputs also soared, because China, too, was trying to grow its economy by a massive dose of stimulus. The upshot was the government push wasn’t enough to keep growth rates up. The aggregate profits of non-financial private sector companies started shrinking from 2011-12, according to data from the Centre for Monitoring Indian Economy (see Chart 3). The interest cover of companies fell, affecting their ability to service and repay bank loans. As a result, loans started going bad and the increase in non-performing assets (NPAs) was aided by an RBI determined to clean up banks’ books. Were the bad loans the result of the credit cycle then? Not all of them. Consider Chart 4, which shows bank loans outstanding to infrastructure as a percentage of non-food credit. Note the sharp rise from 1.1% of non-food credit in 1998 to 15.4% by 2015, before the lending spurt led to a build-up of bad loans and stranded assets, and banks beat a hasty retreat. As I had pointed out three years ago, the government used bank funds to plug its investment deficit. 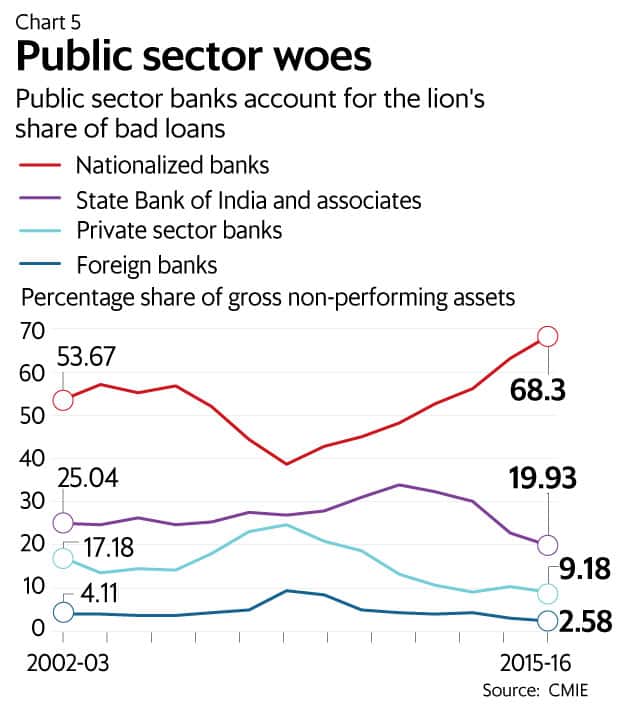 So, the bad loan mess in banks today, as well as the revelations of fraud and malfeasance, is related to the credit boom of earlier years. During the good years, profits and animal spirits are high and all kinds of investments are undertaken, many of them hare-brained. When the cycle turns, banks are often left holding the can.

Also Read: The anatomy of the PNB fraud

Are bad loans and frauds an inevitable consequence of a boom then? That is only one part of the story. The data also show state-owned banks are the ones most prone to going overboard during the boom, while racking up the most in bad loans during the bust. Poor controls and oversight, political interference and a faulty incentive structure are all responsible.

As former RBI deputy governor K.C. Chakrabarty said in a speech in 2013, “PSBs (public sector banks) suffer from some structural deficiencies related to the management and governance arrangements. Instances of lax credit management (credit appraisal, credit supervision, etc.,) and poor governance and management standards which, though persisting even before the crisis, were not dealt with in time and, eventually, impacted much more emphatically than was anticipated." Sadly, nothing much seems to have been done about it since then.

That said, at least we now have an insolvency and bankruptcy mechanism that will force banks to resolve their bad loans quickly when the next surge in the NPA cycle occurs.