India’s bond market has a 2018 message for Narendra Modi

One year ago, India's bond market was riding a wave of unprecedented liquidity. Now it's mired in all kinds of doubts, ending 2017 weaker than Chinese sovereign debt

One year ago, India’s bond market was riding a wave of unprecedented liquidity. Now it’s mired in all kinds of doubts, ending 2017 weaker than Chinese sovereign debt when the opposite outcome would have been more natural. After all, India saw a ratings upgrade by Moody’s Investors Service during the year, while China was downgraded.

The message for Prime Minister Narendra Modi is clear: in 2018, go easy on the fiscal sauce.

A near-4% yield on 10-year notes from the People’s Republic of China is partly a result of President Xi Jinping’s deleveraging campaign, and partly a reflection of the strengthening Chinese economy (a purchasing managers’ index released Tuesday showed the fastest expansion last month since August.) Aided by exports, India’s manufacturing economy is also on the mend. But it’s still very early in the cycle. Modi would like a more solid investment and jobs recovery scorecard before next year’s general elections. So India’s 10-year yield hitting 7.4% last week—a full percentage point increase from late July—isn’t a feature. It’s a bug.

What’s behind it? One overhang for the bond market is GST. The transition to a goods and services tax hasn’t been easy anywhere. But the version of a value added tax that New Delhi introduced in July—with five rates and constant tinkering with bands and deadlines—has been a disaster. Revenue collection is sliding after the government was forced to shift a variety of consumer goods to a lower GST bracket; whether consumption will revive as a result of those tax cuts is still uncertain.

Meanwhile, time is running out: the fiscal deficit in the first eight months of the financial year that ends in March is already at 112% of the full-year goal. When the government announced last week that it would borrow an additional Rs50,000 crore through 31 March, investors lost their nerve. The Reserve Bank of India (RBI), which manages New Delhi’s debt sales, had to trim a planned auction on Friday to help banks contain their mark-to-market losses for the year. 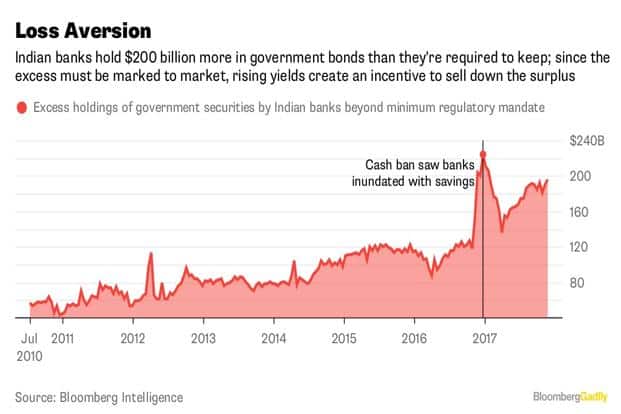 Those losses are important because India’s banks, hobbled by $207 billion in bad loans, are the biggest holders of government bonds. Amid anaemic demand for new bank loans, the public sector banks need to make whatever profit they can on their bond portfolios. But that’s becoming impossible.

As Bloomberg Intelligence economist Abhishek Gupta has noted, Indian banks’ extra inventory of government bonds—beyond what RBI requires them to hold—is approaching $200 billion. That’s almost as high as in December 2016, when households were forced to park their savings with banks after Modi banned 86% of the country’s cash in circulation.

Since the lenders must mark to market their excess holdings of government securities, they have good reason to dump them in a rising interest-rate environment. Throw in an additional layer of bonds to meet liquidity coverage norms under Basel III, and the lenders may still have a surplus of about $41 billion.

The saving grace is the US 10-year bond yield. Economists’ surveys show a consensus expectation for this to stay below 3% by the end of 2018, lower than where it was in 2013 when India (together with Indonesia, South Africa, Brazil and Turkey) got whacked by capital outflows. India must hope its GST clouds part before rising US interest rates again become ominous.

But one thing is clear: there’s no room now for finance minister Arun Jaitley to make his last budget before the election a populist one. Let 2017 be a cautionary tale. If a dream year for Indian bonds could sour so badly, there’s no telling what nightmares 2018 may have in store. Bloomberg Gadfly