The real trouble with beef

Within the meat-eating universe, as the chart so starkly reveals, eating beef is most damaging

The news just keeps getting worse for my global tribe of meat eaters. Last month, we were told processed meat was carcinogenic. That eating ham and sausages is as damaging as smoking. Now, we are told the creatures we eat emit the same volume of planet-warming greenhouse gases as emissions from all the vehicles on Earth.

So, not only are we meat eaters killing ourselves (the link with non-processed meats is far less clear), we’re killing the planet? Roughly, that’s about right. 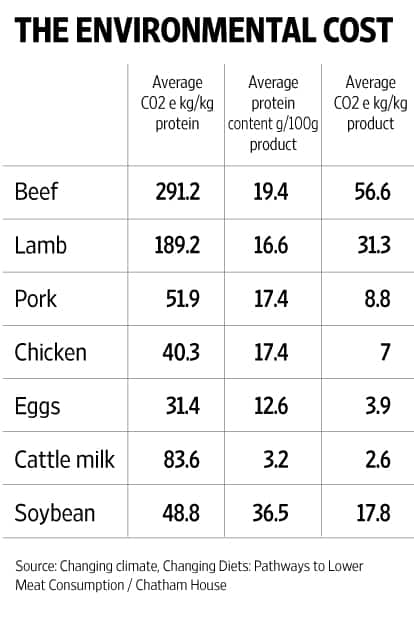 Tailpipe emissions, the technical term for vehicle exhaust, contribute about 14.5% of global emissions, the same as emissions from livestock, primarily from cattle and sheep but also from chicken and pigs, said a new report from Chatham House, a London-based think tank.

“Globally, food systems are responsible for up to 30% of all human-driven greenhouse gas (GHG) emissions," said the report. “The production of animals and of crops for feed alone accounts for nearly a third of global deforestation and associated carbon dioxide emissions; it is a primary source of methane and nitrous oxide, two of the most potent GHGs; and in terms of water, land and energy use, it is highly resource-intensive."

Of course, methane, nitrous oxide and carbon dioxide are also released to produce crops, but the damage they do per unit is far less. For instance, the soybean cultivation figures in the accompanying chart are from a worst-case scenario, but it still produces about one-third of GHG emissions per kilo comp-ared to beef. This worst-case scenario refers to soybean grown in tropical rainforest, the clearance of which plays a big role in warming the planet. Indeed, chopping down forests accounts for a third of all global GHG emissions.

Within the meat-eating universe, as the chart so starkly reveals, eating beef is most damaging. Overall, ruminants—or animals with four stomachs—generate the most GHGs. Think of all the gases from that slow chewing, digestion and methane burps. Monogastric creatures, such as poultry and pigs, have one stomach and are substantially less damaging. If you must eat meat, eat chicken and pork, according to the data.

The auguries are not good. Meat eating is likely to increase 76% over the next 35 years.

“A ‘protein transition’ is playing out across the developing world: as incomes rise, consumption of meat is increasing," said the Chatham House report. “In the developed world, per capita demand for meat has reached a plateau, but at excessive levels. Among industrialized countries, the average person consumes around twice as much as experts deem healthy. In the United States, the multiple is nearly three times."

India seems to be in a sweet spot with an average meat consumption of 10g daily—against the US’ unhealthy 250g daily. India’s consumption of animal protein is growing. For instance, over seven years ending 2012, eating beef and buffalo increased 14% in urban India and 35% in rural India, according to official data. However, the meat of choice for India is also, relatively, the least damaging: Chicken, which saw a 181% increase in urban areas and a 256% surge in rural over the same seven-year period.

Present trends are not sustainable, the report warned. If meat eating in emerging nations were to move towards developed-nation levels, the health, environmental and social costs would be huge. The protein transition is partly responsible for the world’s simultaneous epidemiological transition, the switchover from communicable diseases to non-communicable, or so-called lifestyle, diseases. Meat eating is increasing obesity and the risk of non-communicable disease—including cardiovascular disease and diabetes, both of which are reaching epidemic proportions in India—and some cancers. And don’t forget other impacts of raising livestock—deforestation, species loss, land degradation and overuse of water.

A healthier diet globally would reduce more than 25% of emission cuts required by mid-century, the Chatham report estimated. “There is therefore a compelling case for shifting diets, and above all for addressing meat consumption," said the report.

While Indians can comfort themselves that their meat of choice, chicken, is more benign than beef, the bottom line is that “global per capita meat consumption is already above healthy levels".

In developed countries, it has reached critical levels. Whether we like it or not, there is little question India will have a special role to play.

Samar Halarnkar is editor of Indiaspend.org, a data-driven, public-interest journalism, non-profit organization. He also writes the column Our Daily Bread in Mint Lounge.

Comments are welcome at frontiermail@livemint.com