The Uber model can be a powerful tool to drive down costs for the consumer while improving incomes for asset owners, and can yield surprising results when applied to fundamental problems such as agriculture

I have always had a distaste for start-ups that describe themselves as an “Uber for something". Mostly because they tend to apply the principles of the sharing economy to decidedly first-world problems. Usually in a misguided attempt to become the next unicorn. Needless to say, whenever I come across articles like “Doggy Ubers are Here", referring to start-ups that are offering dog-walking services on demand, I cringe. It’s not the Uber model that I have a problem with, it’s the thoughtless application of it to incremental problems.

The Uber model can be a powerful tool to drive down costs for the consumer while improving incomes for asset owners. And can yield surprising results when applied to fundamental problems such as agriculture. And a new crop of Indian start-ups such as EM3 Agri Services, and Gold Farm are doing just that. They’re building platforms that enable Farming as a Service, or FaaS.

India is a land of small farms. Today, the average Indian farm size is 2.84 acres. The average American farm’s size is 434 acres. And one look at the distribution of farm sizes tells us that more than 85% of India’s farms are smaller than 5 acres. This landholding pattern is the result of a series of land reforms undertaken by the states after Independence with the dual objective of improving farm productivity and eliminating social inequity by dismantling the zamindari system.

While the states succeeded to varying degrees in the second objective, farm productivity has stayed low. Which is a bit of a travesty considering India has the second largest cultivable land base in the world—only marginally behind the US.

If there is something that Indians can claim to have global dominance in, apart from a demographic dividend, it is the diversity of climate and top-soil that makes it the only country in the world capable of growing almost any grain, fruit or vegetable in abundance. But instead of being the bread basket of the world, why is it that India barely manages to feed its own population?

While there are multiple reasons for this including poor quality of seeds and lack of education for farmers on best practices, the dependence on manual labour for farm operations is a very large contributor. There is a direct and almost linear correlation between the extent of mechanization (measured in kilowatts consumed per hectare of farm land) and farm productivity. 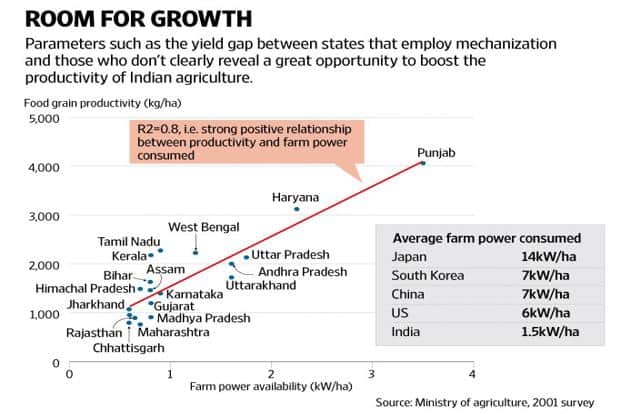 And as we can see in the chart alongside, while the US and China consume 6-7kW of power per hectare, India is at a meagre 1.5kW per hectare. This, combined with the yield gap between states that employ mechanization against those who don’t, clearly reveals a tremendous opportunity to boost the productivity of Indian agriculture. The catch of course is the fact that small farmers can’t afford the capital equipment required to mechanize their farms.

The prevailing solution of course is manual labour. However, continued urban migration and rising labour costs (a likely by-product of the National Rural Employment Guarantee Scheme) have significantly raised the cost base for a small farmer. To make matters worse, the harvest season always brings with it the hassle of finding labour as everyone is drawing from the same pool at the same time.

Given these factors, companies like EM3 make perfect sense. By taking the principles of the sharing economy and applying them to farm mechanization equipment, they help farmers mechanize farm operations by converting the capital expenditure into pay-per-use operating expenditure, and saves them the hassle of finding expensive labour that’s in short supply.

The economics of such a model are compelling too. Harvesting an acre of wheat takes five manual labourers a whole day. Each of them charge Rs300 per day. Add to that a threshing cost of Rs600, and you get a total harvesting cost per acre of Rs2,000. EM3, on the other hand, charges Rs1,000 per acre. Not bad considering that harvesting can be scheduled, it takes only a couple of hours and the farmer doesn’t have to lift a finger.

The main question about such a model is one of capacity utilization. Weather dictates the schedule of these operations in an area, and hence mechanized equipment of a certain kind are required in a given area at the same time. How then do you enable sharing? Well, India is fortunate in this regard. The monsoons, which dictate sowing and harvesting seasons, move in waves across the country, striking different geographies at different times. Hence by moving equipment across states to follow the monsoon, firms like EM3 are able to maximize their utilization, thus making the economics viable.

The potential for such a platform is enormous. Since mechanization can be applied at every stage of the crop’s life cycle, it presents multiple opportunities to gather valuable time-series data around the farm’s soil conditions, input usage, yield, weather and much more. This could be used to better underwrite the risk of farm loans or crop insurance, enabling financial inclusion on an unprecedented scale.

Bharat needs her entrepreneurs to engineer novel solutions for large and seemingly intractable problems. And agriculture is one such sector where we desperately need founders to think differently and apply learnings from different markets in search of new answers. After all, according to expert estimates, we will have to somehow grow more food in the next 35 years than we have ever grown since the dawn of agriculture. Models built on the sharing economy could help us get there. Sharing might just be caring.

Sahil Kini is a principal with Aspada Investment Advisors. The Bharat Rough Book is a weekly column on building businesses for the middle of India’s income pyramid.