Rabbits must have been an Italian preoccupation in the early 13th century. Or at least, their fertility must have been. Because in 1202, a mathematician in that country wrote a mathematical treatise in which he speculated about the fecundity of rabbits. And so on the 810th anniversary of its publication (gotta have an occasion, you know), I want to remember those rabbits. That man. 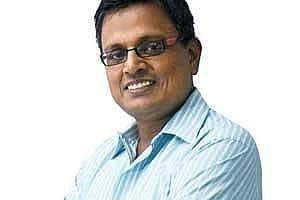 Question: how many pairs of rabbits in the field at the end of a year?

That’s 233 pairs—one hell of a lot of rabbits—at the end of a year. And each number, as we have seen, is the sum of the previous two numbers in this sequence.

The Italian mathematician was Leonardo Pisano, though he is universally known as just Fibonacci. The sequence of numbers his imaginary rabbits generated was actually known to Indian mathematicians some centuries earlier, but today they are called the Fibonacci numbers. And the amazing thing is, they pop up everywhere.

As folks who like the Fibonacci sequence will tell you:

• You can use Fibonacci numbers in a particular way to draw a spiral. Such spirals match the shape of the famous Nautilus shell, or even neem leaves and hurricanes, looked at from above.

• The ratio between a Fibonacci number and its predecessor, as you saunter through the sequence, approaches about 1.618. This is called the golden ratio, and it too pops up everywhere. For example, rectangles whose sides are in this ratio are particularly pleasing to our eyes. Some of mankind’s most elegant creations incorporate such golden rectangles: example, the pillared end of the Parthenon in Athens fits inside one. The ratio between the height of a beautiful swimsuit model and the height of her navel is also the golden ratio, and this is why she’s so beautiful.

Except that as seductive as Fibonacci numbers are, much of this is an old failing a lot of us have: the tendency to see significance where there is none.

Take the spiral. Drawn the Fibonacci way, it’s really not a smooth spiral at all; it is just a sequence of ever-larger quarter-circles joined together. Unmindful of that little detail, people will superimpose it anyway on all kinds of phenomena—Nautilus shells to chameleon’s tails to galaxies; I’ve even seen it applied to a young woman tossing her long wet hair—and gasp in wonder. We gasp along, because all of us like nice pictures, never mind if they are force-fit to a preconception.

Take the golden ratio. If the golden rectangle is so pleasing, why are the floor of the Parthenon, and its other end, completely different kinds of rectangles? Besides, there’s research that suggests that if people at all choose some rectangles over others, it’s decidedly non-golden ones they like. And what about—can we hope? —swimsuit models? One mathematician actually measured several such ladies (“It’s a tough job," he commented, “but someone has to do it.") and found that their navel-height ratio was nowhere near the golden ratio.

It’s true: there are plenty of interesting attributes of Fibonacci numbers. But all this stuff about nature and preferences is just so much Fibonacci frippery. I love this laconic comment by two golden ratio debunkers, Douglas Bobko and H.R. Schiffman:

“Research on the golden (ratio) as an empirically demonstrable preference has most often been applied to the rectangle where the results, on the whole, are negative."