For decades, Indians endured airports, circles of purgatory to be traversed before they could be ejected into the paradise of abroad—or just get themselves to a different city. Now, we have become airport connoisseurs—savouring the drive along six-lane highways past well-manicured botanical insta-gardens (have we already left India?), comparing India’s newest with its peers, and with the world’s finest. Which has the biggest Croma, the smartest, sweetest-smelling toilets, the best dosas? These glassy structures, abstracted from their landscapes, seem to become even more impressive to us when rendered into the lexicon of new India’s statistical architecture: “With 78 gates, 97 automated walkways, 95 immigration counters, 20,000 sq. m of retail space, and parking for 4,300 cars," the press announced when Delhi’s T3 opened in 2010, “the building is comparable to the aviation hubs of Dubai, Hong Kong and Singapore." As yet, we don’t have our own home-grown Tyler Brûlé, self-appointed scourge of the global airport industry, perhaps the only person in the world who can tell you whether the luggage conveyor at Helsinki Airport is slower than Hobart’s, whether the flooring at Narita is better than JFK for roll-on Rimowas—but I’m sure it’s only a matter of time before we have our very own exponent of the arcane art of airport criticism.

There is a great deal to celebrate in this renaissance age of the Indian airport—much was promised, much has been delivered and on time, and I, along with many others, benefit from the ease and comfort these new terminals provide. It’s also the case that the new airports, and the private companies that run them—GVK in Mumbai and Bangalore, and GMR in Delhi and Hyderabad—are fostering a new type of culture of public usage. In many respects, India’s new airports have created a certain kind of level space: A regularity of standards is achieved, in the sense that all passengers appear to be treated alike, queues and lane discipline are observed, there is none of the haggling over excess baggage or porter’s fees, or the special fawning over sharp-elbowed “VIPs" that one often saw in earlier incarnations of Indian airport culture. The impersonality of market norms brings a calm focus to all who enter India’s new global portals. 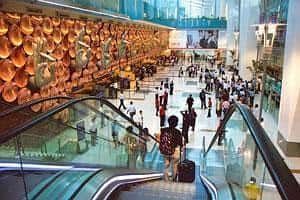 As Mint reported last year, the GMR-led consortium that built T3 in record time also overspent by more than double—with those additional costs now to be recouped from airport development taxes paid by users over the next several years, and also from public grants approved by the Airports Economic Regulatory Authority—taxpayers’ money, yours and mine. Cost overruns were not reported to the public stakeholders; decisions to expand built space were taken without consultation. Further, the companies that built these airports now also run them—and so have something of a captive hold over how operational and running costs are determined.

We can expect tens of thousands of crores to be spent on such projects in the next decade and more, projects that are described in GVK’s publicity material as “the visible evidence of the country’s rapid progress". Yet the scrutiny and auditing mechanisms that are available for monitoring such projects are astonishingly feeble. Progress rarely happens on auto-pilot: It must be a self-reflexive and self-correcting process.

Big questions turn also on how we dispense land and arrange space in our cities, on what kinds of public provision we are able to make for those firmly grounded in the slums that are so often inextricably mixed in with the “airport cities" that accrete around runways and terminals. As the race to build accelerates, how are the lives of those who live in the penumbra of these structures affected? They exist in a kind of limbo state, a perpetual state of unknowingness as to who will or won’t be eligible for rehabilitation, if and when their homes might be razed. Rumour displaces fact, helping to create a world of volatility and mistrust—one of the many conditions documented by Katherine Boo in her new book about citizens living in a slum beside Mumbai airport, Behind the Beautiful Forevers (full disclosure: I am married to the author).

The fact is that India’s new airports are in tension—sometimes even at war—with their social environments. Either they take pains to remove themselves from the city—or to remove the city from their own ambit (an effort underway in Mumbai). It’s not surprising that the private companies building India’s airports spend a good deal of time buffing up their own image: glossy magazines distributed free (Touchdown), much-advertised CSR programmes, generally every effort to portray themselves as benign public providers.

Even as we need such projects, and more of them, we need also to be more quizzing of them: of how costs are determined, of the levies, tolls and taxes which are applied to keep these places profitable, of how benefits stack up against costs. We can’t afford to let such public-private partnerships become accountability-free zones, like sovereign airport city states with their own security, their own financial parameters, and their own definition of the country’s changing needs.

That there is an understory to the glassy success of our new airports is not in itself surprising: After all, which successful recent Indian project doesn’t involve land grabs or deals, and unaccountability? But it’s exactly the high visibility of these projects, their own claim to be embraced as success stories, that invites attention. One clear lesson of the recent financial and bank crises is that the instruments of private capital need to play by transparent rules, to make themselves accountable—if nothing else, for purely selfish and self-preserving reasons. We may be in an age of cosmetic engineering—and but we cannot afford to be in one of cosmetic accounting.

Sunil Khilnani is Avantha professor and director of the King’s India Institute at King’s College London. A new edition of his book, The Idea of India, has just been published as a Popular Penguin.

Write to him at publiceye@livemint.com