Data indicates that online shopping and travel bookings, two- and four-wheelers, smartphones and jewellery brands scale up their messaging on TV during the festive period

The best thing about my job—and I count that as a blessing—is that I get to experience first-hand the immense diversity that is the essence of India. Tracking viewership of 550+ TV channels, across 17-odd languages, and a wide range of content genres is indeed a privilege.

India is a country of many languages, cultures, cuisines, moods and festivals. And there is no better platform on which this incredible kaleidoscope is showcased than on television. This diversity comes through strongly in content choices that television offers, and what viewers across India consume.

Ahead of this festive season, I decided to drill into our data to see if I could pick up some trends that reflect consumer behaviour.

Festive season—it starts around early-to-mid-September and peaks around Diwali—is when most people go shopping. Be it their first car, a new refrigerator, painting and doing up homes, or going on a holiday—many prefer to wait for the festive season to indulge. The season is also considered auspicious by many, and hence they time their purchases during this period.

So, do brands scale up their advertising to tap into this emotion? 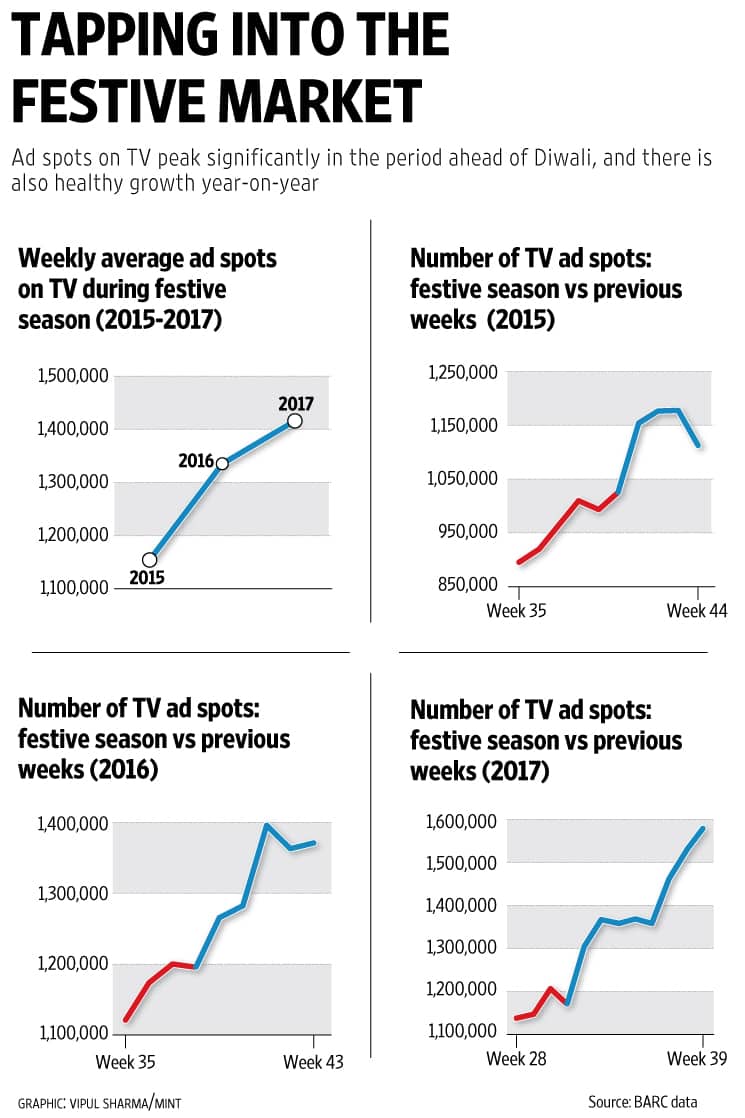 With TV being the preferred destination for advertisers, it came as no surprise to me when I saw trends thrown up by the Broadcast Audience Research Council (Barc) India data: ad spots on TV peak significantly during the festive season, and there is also healthy growth year-on-year. In 2015, average weekly ad spots on TV during the festive season was 1,154,991, which grew to 1,336,483 in 2016. This year, ahead of Diwali, that number is 1,416,037—a growth of 23% over the last two years.

A Barc India-McKinsey study indicates that TV advertising spends will continue to grow year-on-year. In fact, it will double by 2020, and will retain its 42% share in total advertising. This is also reflected in the growth chart of ad insertions, especially during festivals.

Going through the data for 2015-2017, I spotted another interesting detail: ad insertions on TV during the season are beginning to climb earlier than the previous year. While in 2015 the volume of ad insertions on TV started rising four weeks prior to Diwali, in 2016 we saw the rise happening five weeks earlier. This year, the upward trend is a clear full 10 weeks before Diwali.

The significant impact of the festive season on advertising can be clearly seen in Barc India data. Ad insertions dropped 22% post demonetisation, but quickly recovered in the weeks leading up to Christmas, when they grew by 8%.

Across 2015-2017, growth in advertising on TV has been driven by all categories. I decided to drill down another layer to understand which categories and brands get more active during the festive season, possibly to ride the mood of celebration.

Our data indicates that online shopping and travel bookings, two- and four-wheelers, smartphones, ready-made garments and jewellery brands scale up their messaging on TV during the festive period. Just the kind of spends a lot of us make in this season, isn’t it?

The category comprising e-commerce companies like Flipkart and Amazon has upped its advertising on TV by almost 40% this year. Four-wheeler ad spots are up 50%, while two-wheeler is up a whopping 160%. Smartphone ad spots are up 90%, while jewellery and ready-made garments are up 125%.

Not only do travel booking sites and tour operators raise their pitch at this time of the year, I also spotted that tourism boards of several countries like Australia, Japan, Abu Dhabi and Singapore plug their ads on TV during this period. They know that more and more Indians are becoming “global tourists", and the best way to catch their attention is to advertise on TV.

On that note, I would like to wish you all a very Happy Diwali and a healthy and prosperous New Year!