"storyDirectUrl"
OPEN APP
Home >Opinion >Who is the media accountable to?

Who is the media accountable to?

Who is the media accountable to?

Accountability is one of the key issues that all of us talk about during elections. We saw how journalists questioned and sought accountability and responsibility from politicians during the elections. Even given the bad reputations they have, our politicians are accountable to their constituents at least once every five years. But what about media professionals? Who are they accountable to? Their audience? Their licensor/government? Their shareholders? Their owners? Advertisers?

The table shows how every exit poll conducted by so called “reputed agencies" and with “the largest ever sample" was nowhere close to the actual results. Sure, some of them did get the state results almost right and that was enough reason to celebrate. But no one was willing to accept their mistakes.

One of the key indicators of accountable media is to openly correct mistakes. Very few news organizations visibly and/or publicly correct their mistakes, especially when those mistakes are embarrassing. Newspapers are relatively better in giving space to rejoinders and corrections pointed out by their readers. (Editor’s note: Mint has a very transparent policy on corrections and clarifications and corrects all errors it makes—irrespective of whether it is pointed out by readers or not). 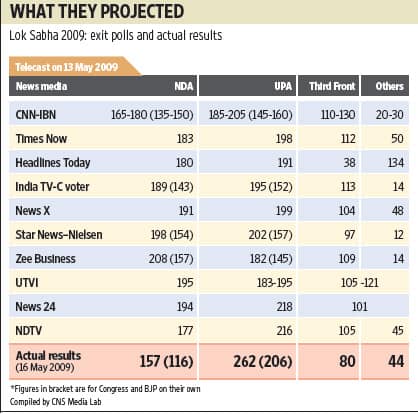 The table shows how every exit poll conducted by so called “reputed agencies and with “the largest ever sample was nowhere close to the actual results. Sandeep Bhatnagar / Mint

Television news channels seem obsessed with viewership ratings. And other news media with readership ratings. Advertising revenues are directly related to the numbers (TRPS and readership figures) and also drive/dictate content. Many new media organizations treat these numbers as convenient measure of their popularity and acceptance. By doing so, they are forgetting that unlike entertainment media, news media has to focus on building credibility and earning the trust of viewers or readers. Given increasing competition in this sector, new media organizations run the risk of losing the trust of their readers and viewers unless they become accountable and responsible. We have already seen that, when pushed to the extreme, viewers and readers find alternative ways and mediums to talk back and protest against news media. Media coverage of the Mumbai terror attack provoked a strong backlash that was difficult to ignore! And the Noida murder case created a sense of antipathy towards TRP-driven news channels.

There was a glimmer of introspection among some media professionals after both events. There was talk of guidelines, advisories were issued, and promises made to institute internal mechanisms for more responsible reportage. (Editor’s note: Mint’s journalists have always worked in accordance with a code of conduct that can be viewed on the Mint website, www.livemint.com). However, this was soon forgotten and news media is back to where it was.

One of the best ways to earn trust, and continue to do well in terms of ratings is to be transparent and let audiences in on why and how journalists do what they do. This calls for humility and openness.

It isn’t enough for people to demand accountability from the subjects of news coverage.

They need to demand that the distributors of news are accountable themselves.

A few indicators are :

Corrections: Does the news organization visibly and/or publicly correct its mistakes?

Ownership: Is it clear to the audience (i.e. readers, viewers and listeners) who owns the news organization? Is there other information about the parent corporation that is divulged, such as any other media and non-media holdings?

Staff policies: Openness about conflicts of interest—Does the news outlet post its standards intended to guide the behaviour of reporters, editors, producers? Can journalists be taken out to lunch, can they accept speaker fees? Is the news organization upfront about any business or other relationships that might put individual reporters or the news organization in a position where news judgment could be clouded?

Reporting policies: Willingness to explain editorial decisions—including the values and ethics behind them; Does the news organization let readers know how it does what it does and why? What are the writing and editing policies: how many sources does it take to confirm a story? In general, does the news outlet make public its reporting standards (such as its sourcing guidelines) and ethical rules (such as its handling of stories about children)?

Interactivity: Openness to reader comments and criticism—Does the news organization have an ombudsman? Does it publish letters to the editor and/or provide other ways for the readers to interact with the people who collect, edit and disseminate the news, such as by posting email addresses for reporters and editors, or by making staff accessible via on-site blogs, live chats, or space to leave remarks at the bottom of stories?

Source : Openness & Accountability: A Study of Transparency in Global Media Outlets by International Centre for Media and the Public Agenda at the University of Maryland http://www.icmpa.umd.edu/pages/studies/transparency/main.html

P.N. Vasanti is director of New Delhi-based multidisciplinary research organization Centre for Media Studies. Your comments and feedback on this column, which runs every other Friday, are welcome at fineprint@livemint.com