Babur in London is an opera whose libretto is written by Jeet Thayil, the Delhi-based novelist on the Man Booker Prize long list this year for his novel Narcopolis. It is about the first Mughal emperor coming to 21st century London, where he is aghast to find young British Muslims making elaborate plans to blow up the city. In a crucial scene, there is the classic confrontation between faith and reason, violence and compassion, revenge and regret, and religious certitude reeking of self-righteousness, and tolerance for doubt. 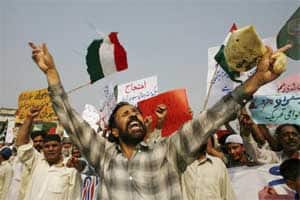 Think of the implications: the organizers had to assume how other people, who will neither see nor understand the opera, will react—and they concluded that they will inflame passions that may result in deaths. That’s not unreasonable to assume: last week in Mumbai Muslim protesters burned buses and broadcast vans, attacked the police and molested policewomen, all because in their opinion

Indian media wasn’t reporting sufficiently the atrocities against Muslims in Assam and Myanmar. Note that the images many had seen were not from Myanmar but were mischaracterized, and note too, that the protesters didn’t express outrage over the deaths of far many more Muslims in Syria.

If Babur in London is offensive, it is legitimate to ask: to whom? To a potential terrorist, not a devout Muslim. And even if it is offensive, so what? Don’t see the opera. And which Muslims does it offend? Perhaps the ones in Britain. But were they offended? No.

The only criticism British critics had was over aesthetic concerns regarding the performance, not over its content. Staging it in Britain is entirely appropriate: Britain has a sizeable Asian minority, many among them Muslims. Since 9/11, when Britain joined the US in the wars in Afghanistan and Iraq, a large section of British Muslim opinion has been bitter and critical of the government. There have been homegrown terror threats, including the coordinated bombings disrupting London’s transport network in July, 2005, which killed 56 people, including four terrorists. Since then, Britain has arrested scores of its own citizens and immigrants, including clerics, and many have been tried in courts, and some sentenced. That many Muslims in Britain are unhappy with their government is known; that some sympathize with such terror acts is assumed and a few have plotted such: the result has been resentment against Muslims. But the topic is not taboo. In Chris Morris’s 2010 film, Four Lions, homegrown terrorists are ridiculed.

British arts have dealt with this tough issue since Hanif Kureishi wrote the story My Son the Fanatic in 1994 about the growing alienation among young Muslim men. The radicalized youth leaves home carrying a backpack, almost presciently presaging how the London bombings were carried out. Then in 1996 he published the novel The Black Album which uncannily dissected the response in the Muslim community after Salman Rushdie’s novel, The Satanic Verses, was published. It has also been staged as a play. Britain still grapples with multiculturalism, but you can buy The Satanic Verses at a bookstore, and Rushdie can speak freely in public.

Opera is complex. The audience can’t hum its music or tap their feet to its rhythm, and the lyrics may not necessarily rhyme. It is an acquired taste. Even if its theme is Indian, it is unlikely that an opera would attract large audiences, even in India’s large cities.

Babur won’t tour India because the state has capitulated to hooligans. In January this year, Thayil was among the writers who read from The Satanic Verses at the Jaipur Literary Festival, and together with the festival organizers, all of them may still face charges. Rushdie had to cancel his Jaipur trip, and nobody will print or sell the The Satanic Verses here, even though only its import was banned in 1988.

Think again of the irony of Babur not touring India. In the opera, Babur speaks wisely, reminding the militants of the virtue of tolerance and peace. But such a message is deemed inflammatory in a country terrified of the bullies who claim offence. The Babur India remembers is the one who built a mosque in Ayodhya in the 16th century, which Hindu militants razed in 1992. In 21st century London, Babur preaches peace, while India is stuck in the politics of the 16th century.