Home / Opinion / Online-views /  UP Polls: Multiple undercurrents
Back
Share Via

As the assembly elections in Uttar Pradesh come to a close, excitement levels are rising. Multiple undercurrents crisscrossing this election have upset all calculations. The high turnout and a tactical shift in voting by Muslims during the campaign has further complicated matters. Most districts of west Uttar Pradesh that went to polls on 28 February and all districts of Rohilkhand that will do so on 3 March are minority concentration districts, hence the Muslim voting pattern can greatly impact the outcome there. 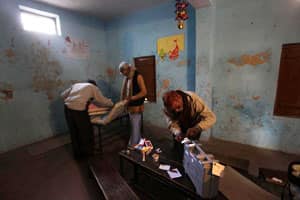 How can we expect uniform voting behaviour from such a heterogeneous social denomination? The protests by Sunni Barelvi Muslims against being ignored by parties in spite of their numbers, or Mewati Muslims resenting the ticket being given to a Pathan Muslim in Chharra (Aligarh) make clear the dangers of treating the community as a homogeneous group.

Are Muslims influenced by fatwas issued by imams and ulemas during the polls? Such fatwas have lost weight today. Muslims know that a fatwa is a piece of advice on an issue to enlighten them about what is “right", according to the Quran. No one has the authority to advise Muslims on their political preferences and voting behaviour. Many Muslims, especially Shias, have been voting for the BJP in spite of fatwas. According to Centre for the Study of Developing Societies data, 2% of Muslims voted for the BJP in the 2007 assembly elections and 3% in the 2009 Lok Sabha elections in Uttar Pradesh. Interestingly, no fatwa has been issued against the BJP this time.

Muslims have been going in for tactical voting since independence to defeat the BJP or its predecessor, the Jan Sangh. After the demolition of the Babri masjid in December 1992, Muslims shifted their allegiance from the Congress to the Samajwadi Party (SP) believing that the former was complicit in the act and also because Mulayam Singh Yadav provided them security. Yadav’s ties with Muslims were shaken in 2009 when he befriended Kalyan Singh, the man responsible for the Babri demolition, in his pursuit of Lodh votes. He did get some Lodh votes but at a heavy price—in the 2009 parliamentary elections, the SP lost the support of 16% of Muslims, who turned to the Congress, enabling it to make a stunning comeback by winning 21 out of 80 parliamentary seats in the state.

When the electoral battle started in Uttar Pradesh this year, it was believed that the Muslim vote would be divided among the Congress, SP and the ruling Bahujan Samaj Party (BSP). Some, in eastern Uttar Pradesh, were expected to support the Peace Party, a small new player. By the end of the fourth phase of polls, it became evident that Uttar Pradesh may be headed for a fractured mandate. The tussle turned from a four-cornered battle into a bipolar one between two possible coalitions—SP- Congress-RLD on the one hand, and BSP-BJP on the other.

The BSP quickly realized that it had no option but to have a post-poll alliance with the BJP to prevent Yadav’s comeback. For this reason, it might have signalled the transfer of its core Dalit votes to the BJP in constituencies where its own candidates were not in contention. That brought the BJP into the contest from the fifth phase onwards.

This resulted in a major shift in tactical voting by the Muslims. Sensing the possibility of a Congress-SP post-poll coalition, Muslims may vote for the Congress where its candidates are in the race and elsewhere, for SP candidates. This will mean a major shift in the community’s tactical voting that was earlier oriented negatively to defeat the BJP. Muslims may now vote positively to bring about a Congress-SP coalition. But parties can take advantage of this only if they do not overplay the Muslim card, otherwise there may be a Hindu backlash, giving an advantage to the BJP.

The high voter turnout is also making the parties restless. There’s an accretion of 10-16% over the 2007 turnout in most constituencies owing to the mobilization of young and first-time voters. It’s not clear if they will vote on class lines; there could also be gender and urban-rural divides among such voters. Also, they may be attracted by the youthful leadership projected by the Congress and the SP. It is also conjectured that SP-BSP voters were already in a high state of mobilization, and hence, those voters newly energized into voting may be advantageous to the Congress and the BJP. But the promise of an unemployment allowance of Rs1,000 by the SP and Rs2,000 by the BJP, respectively, and the consequent rush at employment offices may also be a pointer to the voting behaviour of young voters.

All these various contending forces make the outcome on counting day, 6 March, uncertain and exciting.