Recently the World Health Organization (WHO) announced tobacco industry interference as the theme for World No Tobacco Day this year to focus on the industry’s increasingly aggressive efforts to undermine public health efforts across the world. This global discourse warrants an assessment of the industry’s role in India’s tobacco control and larger public health movement. Every year, tobacco use causes one million deaths in India and the industry spends millions of rupees on clandestine marketing and advertising tactics to recruit new users, particularly the youth. Why does the industry need to try so hard? That’s because tobacco slowly and painstakingly kills 5.4 million loyal customers every year. Another 600,000 people die from exposure to second-hand smoke emitted from lethal products sold by the industry. With tobacco control policies and regulations world over, particularly in developed countries, becoming more stringent, firms are turning to developing countries with poorer and vulnerable populations to establish their stronghold. 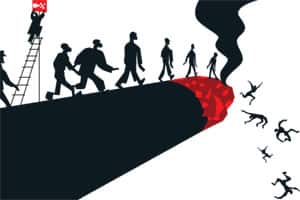 While the health ministry’s efforts to advance tobacco control initiatives are noteworthy, there are numerous instances where the tobacco lobby has posed hindrances in implementing effective and evidence-based tobacco control measures. India has fared rather poorly in introducing large and strong pictorial health warnings as compared with other countries such as Thailand and Pakistan which have implemented large-sized graphic warnings in line with recommendations of the WHO Framework Convention on Tobacco Control.

The law prohibits advertising, promotion and sponsorships by the industry. However, surrogate and indirect advertisements including brand extension, brand placements and depiction of smoking and tobacco use in films and television serials continues. Time and again, youth have been exposed to tobacco advertisements and their receptivity to tobacco marketing is significantly related to increased tobacco use among students. Recent research shows that glamourization of tobacco use in films and television also greatly increases the likelihood among adolescents to experiment with tobacco. The health ministry has been lauded globally for introducing strict rules on depiction of tobacco use on screen. This move was also met with resistance by various sections of the film fraternity but ultimately public health prevailed. This is an excellent example of efficiently curbing tobacco industry interference through joint action between the ministries of health and family welfare and information and broadcasting.

In fact, the Indian government notified some of the strongest pictorial health warnings in July 2006. This move was met with severe resistance from the tobacco industry. The Packaging and Labelling Rules, 2006, were amended with weaker pictorial warnings without skull and bones being introduced in September 2007. Finally, a group of ministers introduced a set of mild warnings in March 2008. Since 2006, nearly 18 notifications have been issued for implementation of pictorial health warnings in India. In 2010, strong warnings depicting a cancer-stricken mouth were notified yet the tobacco industry coerced the government by announcing a closure of production in their factories and published losses of revenue to the exchequer and weak warnings continued. Finally, comparatively stronger health warnings have been implemented since 2011, but only on smokeless tobacco packaging while smoking forms continue to depict lung cancer.

The need of the hour is to curtail the unrestricted and sophisticated means of manipulation by the tobacco industry in promoting its products by limiting the scope to advertise on tobacco packaging. The solution to this could be the introduction of plain packaging. Australia has been leading the way in plain packaging, a law that prohibits the use of logos, colours, brand images or promotional information on the packaging of products. All packages are in standard colour, style with clear and large warnings. Plain packaging also makes pictorial health warnings starker. Since most tobacco users in India fall in the illiterate or low-literate groups, pictorial health warnings are even more important as a source of information. Australia even faced and successfully countered industry interference in introducing plain packaging and is fighting a challenge on alleged infringement of bilateral trade agreements.

Given India’s chequered legislative history on issuing warnings on packages, rising tobacco burden and global commitment to fight tobacco use, the government must consider a move towards plain packaging in India. India’s Packaging and Labelling Act has undergone multiple changes under industry interference. It’s time to curb this interference by introducing plain packaging.