Narendra Modi is positioning himself to be prime minister. What sort of leader will he make? We can tell by understanding him as a man. Look on this piece as his biography. Born 17 September 1950, Modi is 61. His resume says he has a master’s in political science.

He speaks a Gujarati purged of Persian words (like Advani’s Hindi, but better crafted). His Hindi is marked by his nasal accent, but is correct. His English is poor and he works on it.

Modi is called “NaMo" by his fans (the word also means “bow down before"). His father was Damodar, however his early opponents invented the middle initial “ka", calling him NaKaMo (“useless"). That joke isn’t funny any more.

He radiates charisma and Gujaratis love him. Gujarati women are greatly attracted to him sexually, as women are towards all men of power.

Modi is the finest manager of media of any Indian leader. During one speech in Ahmedabad, he learnt a national channel, I think it was Aaj Tak, would broadcast him live at a particular time. He switched to Hindi mid-speech and then reverted to Gujarati when the 2-minute patch was over.

He takes his image very seriously. He is vain and terrified of being humiliated. When shoe-throwing began in the last election, he insisted on a fine mesh between the stage and his audience. 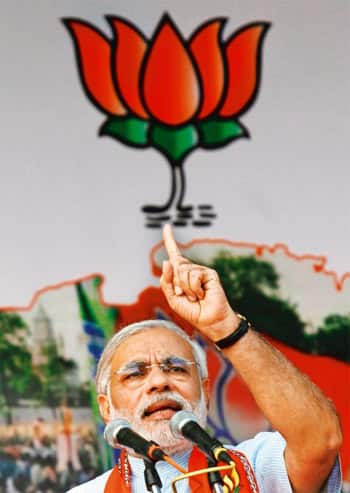 He is possessed with self-belief and utterly uninterested in what others say. He has over 360,000 followers on Twitter, but he follows nobody.

He is above caste.

Gujarat’s BJP vote bank is Patels + upper castes. As a ghanchi from the OBC, or Other Backward Classes, community of oil-pressers (teli) Modi has no caste base. Ghanchis get little respect in a state of merchants and my family will use the word “ghanchi" sneeringly.

He has united a very caste-minded society by first rallying it against Muslims/Pakistan/jihad/terrorism and then rousing their pride in their state. He has put to pasture one Patel rival (Keshubhai) and made another Patel, the clownish Pravin Togadia, irrelevant. He has neutralized Patel “unhappiness". Four of his nine cabinet-ranked ministers are Patels.

Modi has brought to heel an unruly and factional Gujarat BJP by creating unity of command.

After Modi, Harijans and Adivasis are almost as likely to vote BJP because of the popular appeal of Hindutva and the great social work done by the Sangh in northern Gujarat and the Panchmahals.

He has excellent sources and usually has research done on those he is about to meet.

I first met him in 2002 when the Editors Guild sent a three-man team to assess if there was media prejudice against Muslims during the riots (of course there was).

In his Gandhinagar office Modi took me aside. He slipped his left hand into my right, interlocking our fingers, and began swinging it playfully in the manner of Indian men. “Saurabhbhai saffron, Aakarbhai red," he said with a chuckle.

The reference was to my colleague, the editor of a Gujarati paper whom I got fired because he wrote what I thought was an appalling editorial justifying the riots.

I once met an IAS officer on a flight out of Ahmedabad and told him I had just met the CM. “You’re fortunate," he said, “my minister hasn’t met him in six months."

Modi does not hesitate to get rid of high-quality and dedicated civil servants if they cross him. Young and upright IPS officers like Rahul Sharma and Satish Verma who defied the Gujarati consensus to “go easy" on rioting Hindus have been fixed.

Sharma, who cleverly secured the damning cellphone records of Modi’s ministers during the riots, is being prosecuted under the Official Secrets Act. Verma is facing action on charges of negligence.

Modi is probably one of India’s three most disciplined leaders in terms of control over policy and work ethic. Those who are given time to meet him are guaranteed to be led into his office at precisely the appointed hour.

He is decisive, and persistent in his policies. The Panchamrut schemes he initiated 10 years ago are still the thrust of his vision for the state. Economist Shankar Acharya wrote in Business Standard (14 July) that under Modi, Gujarat’s agriculture grew at an astonishing 8%.

In their book, High Growth Trajectory and Structural Changes in Gujarat Agriculture, Indian Institute of Management (IIM) professors Ravindra Dholakia and Samar Datta explained Gujarat’s agricultural success thus: “It is fully endogenous, systematically led by long-term vision and comprehensive strategy requiring solid commitment and dedication to the cause, political will to pursue market-oriented reforms of policies and institutions, interdepartmental and inter-ministerial coordination and cooperation, and a responsive and entrepreneurial farming community."

Acharya wrote that, given this was not possible in our other states, “it seems closer to an ‘exogenous’ miracle".

Meaning that it was influenced and created from the outside, by Modi. This is true.

He makes no concession to Muslims.

For four consecutive Lok Sabha and assembly elections he has given not a single ticket to Gujarati Muslims. That is 364 assembly and 52 Lok Sabha tickets handed out. Muslims are 9% of Gujarat’s population, but Modi has made them electorally irrelevant. He reminds them of that by not throwing a token ticket their way.

Gujaratis are used to leaders who compromise. Modi is another kind of Gujarati leader. Not inclusive and ideologically unbending. Gujaratis wrongly believe Patel was such a man and call Modi “Chhote Sardar" (I’m certain he seethes at chhote).

In his book Sardar Patel and Indian Muslims, Rafiq Zakaria wrote of how Articles 25 and 26, the right to convert Hindus and to set up Muslims-only institutions, were actually put in place by Vallabhbhai, his gift to Muslims. Gujaratis are horrified to be told this but Vallabhbhai Patel was no bigot.

Modi does not have a problem with minorities as such. He loves Parsis, whom he sees as patriots, and he is in turn popular with them. He was chief guest for their oldest fire temple’s 1,290th anniversary in Udvada earlier this year. One day I went to meet Modi with a friend from Surat, Aadil Bhoja. When I introduced him by first name to Modi, the chief minister, who was expecting only me, hesitated and said: “Aadil etle... (Aadil meaning...)?"

“Parsi," said Aadil (Gujaratis always place each other by community and caste). Modi was immediately at ease, talking about how colourful Parsis were. His problem is Muslims.

During the Ayodhya movement, when Modi was in his late 30s, sociologist Ashis Nandy interviewed him. In 2002, Nandy wrote this in Seminar: “It was a long, rambling interview, but it left me in no doubt that here was a classic, clinical case of a fascist. I never use the term ‘fascist’ as a term of abuse; to me it is a diagnostic category comprising not only one’s ideological posture but also the personality traits... He had the same mix of puritanical rigidity, narrowing of emotional life, denial and fear of his own passions combined with fantasies of violence—all set within the matrix of clear paranoid and obsessive personality traits."

That such a man became not just a leader, but a popular one led Nandy to add: “I am afraid I cannot look at the future of the country with anything but great foreboding."

In a nation that responds to emotion, Modi is one of our great orators. I would say that along with Balasaheb Thackeray and Lalu Prasad, he is one of our three best. All three men are hugely entertaining and original. About the US president, Modi said his name reminded him of a Gujarati child in pain screaming for its mother: “O ba! O ma!"

The late Chandrakant Bakshi, one of Gujarat’s most famous writers, told me over a drink that he trembled each time he heard Modi’s rallying cry: “Paanch karod Gujarati (50 million Gujaratis)".

There is no whiff of corruption about Modi, and he isn’t interested in money in that sense.

He does not have much of a life or interests outside of his work. One night I was the last person on his list of people to meet for the day. As we wound up, I asked him what he would do now. “Go home to my mother, of course," he said, surprised.

He has a wife, a villager, whom he discarded very early on. He does not respond to stories about her.

His elbow is sharp. Seven years or so ago, he upset the RSS because he was autocratic and dismissive of their advisers. Among them was a powerful swayamsevak named Sanjay Joshi. It appeared Joshi had Modi in trouble.

Then Joshi, or someone looking exactly like him, was secretly videotaped bedding the young daughter of a family friend. These CDs were distributed anonymously to leaders at the meeting of the BJP national executive in Mumbai in 2005. The visuals made the front pages of Gujarati newspapers. Soon SMS jokes began where Joshi’s sorry sexual performance and orthodox underwear were skewered (“why did he even bother taking off his langot?").

Modi has ruled unchallenged since. His economic success and national popularity has silenced the Sangh.

Modi has great patience. He has worn out the secularists. His insistence on economic performance has trumped their insistence on secularism. His understanding of middle-class Indians and what moves us is first-rate, better than any politician on the subcontinent.

He is street-smart and clever but not intellectual. He isn’t widely read, and the books he has written are by way of hagiography. His poetry is shockingly banal. Here he has escaped criticism because he writes only in Gujarati, but sample this translation:

“At sweet sixteen, melody of a cuckoo within

On whom showers romance, the flowers of spring?

Appearing poor, but rich within

From the heart of autumn, Rises the cooing of spring

Who’s getting wedded in woods?

Each tree is lit in festive moods!"

Personally, I am not enamoured of a man who thinks up such rubbish. However this is the sort of mush that Indians love and perhaps Modi has calibrated it. The man himself will be much harder, as we will learn.

Manmohan Singh gave Indians our best laws in half a century: Right to information, right to education, the Mahatma Gandhi National Rural Employment Guarantee Scheme (MGNREGS), the nuclear deal and soon the right to food.

Unlike America, India’s parliamentary system conflates legislature with executive. It is fair to see Manmohan Singh as passing the first part of his job and failing the second.

In that sense Modi will be right for a people who have always required firm governance more than they have the freedom to write their laws.