"storyDirectUrl"
OPEN APP
Home / Opinion / Is the investment cycle about to turn?

Is the investment cycle about to turn?

Prospect of higher capacity utilization, improvement in corporate savings and availability of funds outside banking system fuel hopes of an investment rebound

Here is a deliberately provocative question: Is India on the verge of a revival in private sector investment?

It is widely accepted, and quite rightly so, that a robust economic recovery is unlikely without a strong rebound in private sector investment. There have been three roadblocks—excess capacity in many industries, too much leverage in corporate balance sheets and banks weighed down by a mountain of bad debts. Their combined effect is an investment slowdown that has ensured that too much of the economic recovery is dependent on private consumption.

Even the most recent numbers do not look good. Investment as a percentage of gross domestic product (GDP) is down almost 10 percentage points from its level in the quarter ended March 2013. The Reserve Bank of India (RBI) survey of capacity utilization released last week shows that capacity utilization has come down in each of the first three quarters of the previous fiscal year. Banks continue to struggle with the detritus of the previous credit bubble.

The question asked at the beginning of this column thus seems totally delinked from the harsh reality we see around us. However, the macroeconomic projections released at the end of February by the Organisation for Economic Cooperation and Development suggest that annual growth in gross fixed capital formation as a percentage of GDP will recover sharply from the current fiscal year—from 0.4% in fiscal year 2017 to 4.3% in fiscal year 2018 to 7.3% in fiscal year 2019.

The next question is whether companies have the financial ability to fund capacity creation or whether banks will be in a position to lend to new projects. There are two interesting developments on these fronts that deserve more public attention. 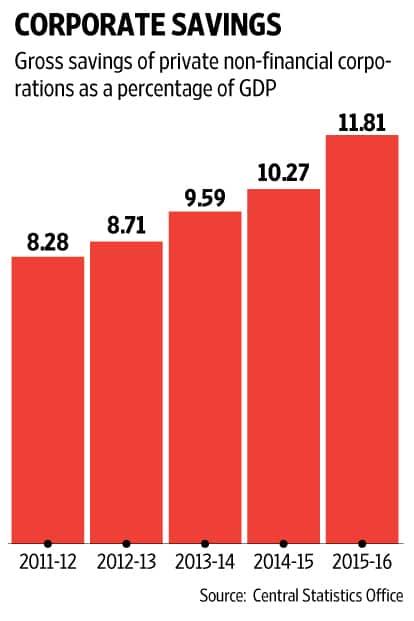 First, corporate savings that are required for the next investment cycle have been improving. The first revised estimates of national income, consumption expenditure, saving and capital formation for the fiscal year 2015-16 were released by the government on 31 January. They show that gross savings of private non-financial corporations are rising (see chart). They are now almost equal to the gross savings of Indian households, traditionally the biggest source of national savings.

Second, banks have been becoming less important as a source of financing for companies. New data released by the RBI last week shows that banks account for less than half the flow of financial resources to the commercial sector in fiscal year 2017. Other sources of funds, such as public issues, corporate bonds, external commercial borrowings and foreign direct investment, collectively accounted for 61.8% of the incremental funds used by enterprises. India continues to have a financial system dominated by banks, especially if one thinks of the stock of corporate borrowing, but the latest data suggests that newer sources of incremental funds are now becoming available.

One final point: Some of the largest companies in sectors such as telecom, mining, steel, power and textiles are still struggling to generate cash flows to service their bank loans. The state of Indian banks is perhaps the biggest economic policy headache right now. But it is also worth asking whether the next investment cycle will be led by the same companies in the same sectors. One of the problems of macroeconomic data is that it does not capture important microeconomic nuances. Each investment boom has its own unique drivers. For example, it is quite possible that companies in other parts of the economy will lead the next upturn in private sector investment even as the stars of the previous investment boom try to deal with the mess in their balance sheets. A sector like logistics could lead the investment recovery after the new goods and services tax kicks in.

Private sector investment is still listless but some strands of recent data offer a few reasons for hope—the prospect of higher capacity utilization, the improvement in corporate savings and the availability of funds outside the banking system. These are perhaps some overdue silver linings to what are otherwise dark clouds.

Niranjan Rajadhyaksha is executive editor of Mint. Comments are welcome at cafeeconomics@livemint.com.