"storyDirectUrl"
OPEN APP
Home >Opinion >Government wants to focus on male sterilization; first to do so since Emergency

Government wants to focus on male sterilization; first to do so since Emergency

What are the reasons behind the government's proposed move?

Even as the health ministry makes a fresh push to revive family planning measures, the ministry of women and child development wants a shift in focus from female sterilization to male sterilization. This is the first time any Indian government has signalled a move towards male sterilization after Congress leader Sanjay Gandhi’s infamous efforts in the 1970s.

The recently released draft National Policy for Women says that “a gender transformative health strategy which recognizes women’s reproductive rights with shifts such as family planning focus from female sterilization to male sterilization will be developed and utilized".

What are the reasons behind the government’s proposed move? Officials at the ministry of women and child development say that this shift is simply intended to encourage men to bear the burden of family planning.

“The policy change is a progressive step to support the reproductive responsibility of women. It is not a reaction to the deaths of women in sterilization camps, nor does it hark back to the Emergency days of forced male sterilization," one official who didn’t want to be identified said.

Cultural biases are responsible for the fall in male sterilization rates, says Dr D.A. Nagdeve, head of the department of fertility studies at the International Institute for Population Sciences.

“Husbands fear that if they become sterilized, and their wives become pregnant, they will be the laughing stock of the village. There are also several misconceptions at work (over male sterilization): that men will lose their virility or their ability to work," he explains.

In any case, the shift of focus is long overdue. It comes after several instances of women dying at sterilization camps due to medical negligence. Though the government does not provide any data on sterilization-related deaths, media reports noted that in 2014, 15 women died in a mass sterilization camp in Chhattisgarh after a doctor sterilized 83 women in six hours. In contrast, male sterilization is a cheaper and less risky procedure.

“After the backlash against the coercive male sterilization programme of the Emergency, no government has dared to push for male sterilization. The reality is that even countries like Bangladesh offer better choices when it comes to family planning. India’s government family planning programmes focus too much on permanent methods of sterilization instead of pushing for spacing methods," says Alok Vajpeyi, head of core grants and knowledge management at the Population Foundation of India.

Who are the women who are the targets of the government’s sterilization efforts?

A research paper by Bornali Dutta, Channdrashekhar and Professor Sayeed Unissa at the International Institute for Population Sciences, titled Female sterilization in India: A comparison of static and mobile services delivery, analysed data from the third round of the District-level Household Survey-III to find that these are primarily rural, educated women in their late 20s across economic classes. 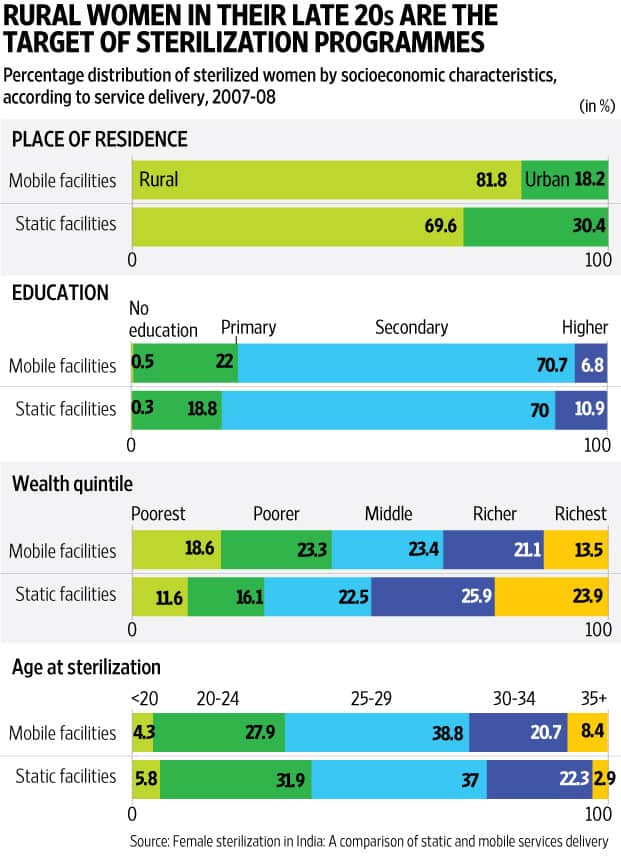 Vajpeyi also points out that rural women end up opting for sterilization as they are rarely counselled on the full spectrum of contraception choices available. Monetary incentives, for both doctors and patients, also play a role: in the Chhattisgarh incident, media reports stated that the sterilized women were paid anything between ₹ 600 and ₹ 1,400 to undergo the operation.

The data from the research paper quoted above also bears out cultural biases. It shows that these women are aware of male sterilization and other contraception methods and yet opt for female sterilization, suggesting their low status in society, lack of decision-making power, as well as the design of government sterilization schemes that give money to women to undergo sterilization efforts.

Even as there is an unmet need for family planning, Vajpeyi argues that the days of target-driven, mass sterilization drives for population control are over. “The fertility rate and the rate of population growth have been falling. Hence, there is no longer an urgent need for sterilization programmes to control population. Instead, the government should focus on providing better choices for family planning," he says.