How to make publicly-funded elections a reality

The MPLAD and MLALAD schemes should be discontinued. The money saved should be used for public funding of elections

Elections to the state legislatures in Goa, Manipur, Punjab, Uttarakhand and Uttar Pradesh were announced last week. Television anchors and their talking heads are in animated discussion on pre-poll surveys. Political parties are in campaign mode. And we are in the midst of yet another election season.

Democracy has progressively put down roots among people, even if it has not provided them opportunities or ensured their rights. There is growing political consciousness among citizens, reflected in the massive voter turnouts that make clear decisions. There is an increasing empowerment of the excluded as voters, if not leaders. There is a rights consciousness in people, particularly the young, who are beginning to demand accountability from elected governments. This is attributable, in part, to faith in the electoral process. Elections in India are, on the whole, seen to be free and fair. The Election Commission has evolved as an institution which is impartial and effective in its conduct of elections. Yet, it is unable to ensure a level playing field in the contest for political power. The reason for its failure in this domain lies in election finances.

The role of money in politics, which surfaced after 1967, gathered momentum in the 1970s and 1980s to become established practice by 1990. It spread in range and depth with the passage of time. And it is now a practised art. To begin with, votes were purchased at election time—not everywhere, but in close contests or important constituencies. The practice spread. Those with money progressively acquired an advantage over those without money in the battle of the ballot. Barriers to entry in politics were a natural outcome. The process did not quite stop there. It was soon realized that, after elections, even legislators could be bought and sold. It did not take long for such practices to spread to parliamentarians. There are several examples of votes of confidence that have been won narrowly, not only in state legislatures but also in the national parliament, using methods that are unethical, unfair or simply corrupt.

The technological revolution in communications has created another role for money in elections. The blitzkrieg in the print media or electronic media (with expensive advertising) and social media is now an integral part of election campaigns. Thus, money is omnipresent in election season. Group interests such as the land mafia, real-estate developers, mining interests, corporate lobbies, and even criminals, are closely connected to political leaders and interwoven into the political fabric. In this milieu, there are formidable barriers to entry. And the political sphere is increasingly a preserve of dynasties or oligarchies. Money is the only means of circumventing these obstacles that are almost insurmountable for the ordinary citizen.

It is exceedingly difficult to estimate the election expenditures of candidates who contest elections to Parliament or state legislatures. Conversations with leaders or contestants across political parties suggest that actual expenses of serious electoral candidates, on average, are in the range of Rs10 crore for a Lok Sabha constituency and Rs2 crore for a state assembly constituency. Actual expenses, which could be somewhat lower or much higher, can differ widely across states and constituencies.

The Election Commission imposes a limit on the total campaign expenditure of each candidate which is, at present, Rs28 lakh for state assembly constituencies and Rs70 lakh for Lok Sabha constituencies. There is, however, no stipulated limit on what political parties can spend on behalf of their candidates. It is almost impossible for the election authorities to monitor actual expenses. Moreover, there is no rule about what candidates or parties can receive as contributions or donations. The only stipulation is that if the sum is Rs20,000 or more it has to be received as payment by cheque. The claim of political parties that 80%, if not more, of contributions received are small donations of less than Rs20,000 each, is hardly surprising.

In public discourse, the focus is almost always on economic reform. Strangely enough, political reform is seldom on any agenda for discussion. The reason is simple enough. The vested interests of those who decide lie in preserving the status quo. There has been occasional talk in the context of corruption. The late V.P. Singh, a former prime minister, suggested public financing of elections. Prime Minister Narendra Modi believes demonetization could clean up electoral finances. But state funding of elections has never been more than an idea. Two questions are the standard excuse. Where is the money to come from? How can it be disbursed? There are plausible answers to both. And the idea can become a reality.

The resources allocated to the Local Area Development Schemes for members of parliament and state legislatures—MPLADS and MLALADS—have increased at a rapid pace over the past two decades. These enormous sums of public money, as much as Rs53,000 crore over five years, are often underutilized or misused without social audit or public accountability. Such schemes are also contrary to the principles of political democracy because they provide an unfair advantage to incumbents over potential new entrants. In my view, the MPLAD and MLALAD schemes should be discontinued. The money saved should be used for public funding of elections. It would serve political democracy far better by cleansing the electoral process.

The table sets out the allocations under these schemes by states, for each MP and for each MLA, per year, and over a period of five years, which coincides with the tenure of Parliament and state legislatures. 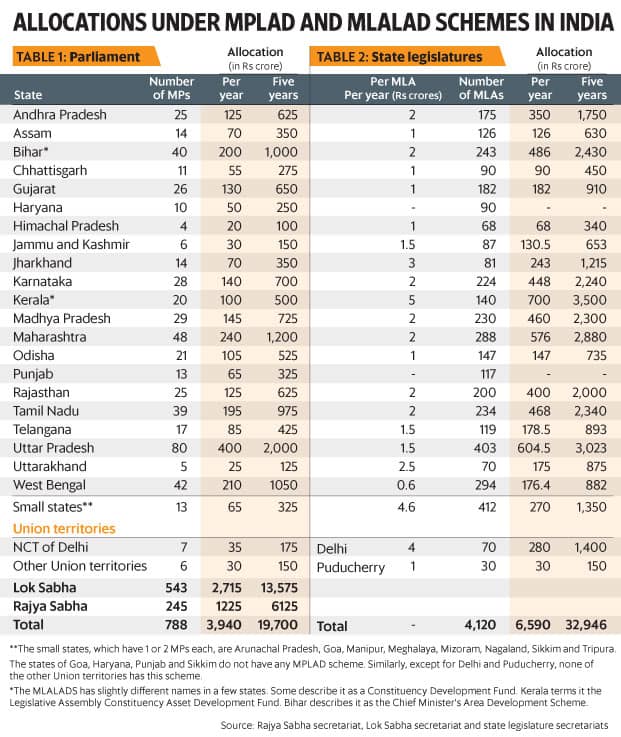 Table 1 shows that each MP, in both the Lok Sabha and the Rajya Sabha, is allocated Rs5 crore per year, so that each MP is entitled to Rs25 crore during an electoral cycle of five years. The total sum allocated, in five years, is almost Rs20,000 crore. Rajya Sabha MPs are elected through indirect elections in their respective state assemblies. In principle, they should not incur any expenditure on their elections. Thus, the entire amount can be allocated for public funding of elections for 543 Lok Sabha members, so that the amount available for distribution among candidates in each constituency would be Rs36 crore. This is more than enough.

Table 2 shows the allocations for each MLA, mostly in the range of Rs1-2 crore per year, as also for the five-year tenure of legislatures, in different states. The total sum allocated, in five years, for all states is around Rs33,000 crore. There are four discernible groups among states in terms of allocations. In Andhra Pradesh, Bihar, Karnataka, Madhya Pradesh, Maharashtra, Rajasthan and Tamil Nadu, which account for 39% of MLAs, the amount available for distribution among candidates in each constituency would be Rs10 crore. This sum for each constituency would be distinctly higher at Rs25 crore in Kerala, Rs20 crore in Delhi, Rs15 crore in Jharkhand and Rs12.5 crore in Uttarakhand (9% of MLAs). In Uttar Pradesh, Telangana and Jammu and Kashmir (15% of MLAs), this sum for each constituency would be somewhat lower, at Rs7.5 crore. However, the amount per constituency would be less, at Rs5 crore, in Assam, Chhattisgarh, Gujarat, Odisha, Puducherry (15% of MLAs), and about Rs3 crore in West Bengal and the small states (17% of MLAs). This scheme does not exist in Haryana and Punjab (5% of MLAs).

For the first three groups of states, the amount available for public funding of elections would be a large multiple of Rs2 crore, which is an average for expenses per serious electoral candidate in each state assembly constituency.

Such public funding could be supplemented by contributions or donations from individuals or entities. But all such payments, irrespective of the amount, must be through cheques. It is imperative that there is complete disclosure and absolute transparency in this process, whether it is contributions or donations received by candidates or by political parties. In fact, contributions by political parties to their electoral candidates must be subject to the same transparency and disclosure. The information should be made available not only to the Election Commission but also be put in the public domain, on websites of candidates and parties. Clearly, this is easier said than done. But it would be far more feasible if public funding meets a reasonably high proportion, say one-half to two-thirds, of total election expenses.

The idea is feasible. There is bound to be resistance from incumbent MPs and MLAs. Similarly, political parties are bound to resist transparency and disclosure. But, eventually, public funding of elections will whittle down this resistance. It needs not just political will. It needs mounting pressure from citizens in our vibrant democracy.

The opaque and gargantuan nature of electoral finance is at the root of the twin evils of corruption and black money. The only permanent solution is to strike at its foundation.