Understaffed police and judiciary, and lack of political will is crippling our criminal justice system

Two recent incidents have seen much debate over India’s criminal justice system. One, the continuing war of words between Arvind Kejriwal and the central government over the control of Delhi Police. Kejriwal has been claiming that bringing the Delhi police under the state government’s jurisdiction would help control crime better.

Second, the turn of events leading to Yakub Memon’s capital punishment. In Memon’s case, even though there was no clemency, the highest court heard his mercy petition in the wee hours, just before he was to be executed. How unbiased and efficient our police and courts are is a polarizing topic in India.

Globally, India seems to be in the middle of the pack, going by the Rule of Law index prepared by the World Justice Project (WJP). The WJP, which started as a presidential initiative of the American Bar Association, is an independent international organization which ranks 102 countries on the basis of 44 indicators covering eight broad areas. India’s overall rank in the 2015 index was 59. Table 1 shows category-wise ranks. 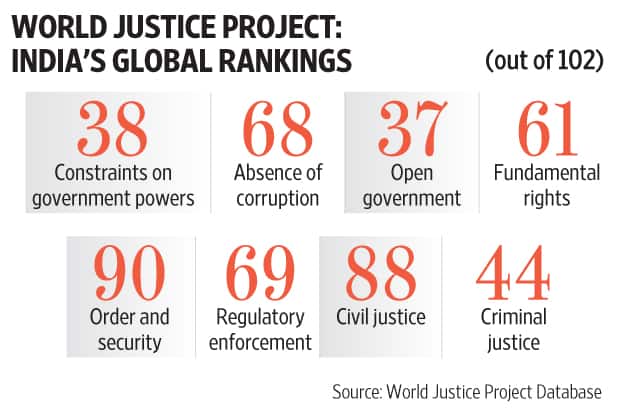 India’s performance has to be seen in the context of a serious human resource crunch in the police and judiciary.

The United Nations Office on Drugs and Crime (UNODC) provides figures on the number of police personnel per hundred thousand people. Out of the 71 countries for which data was available for 2013, India ranked 67. 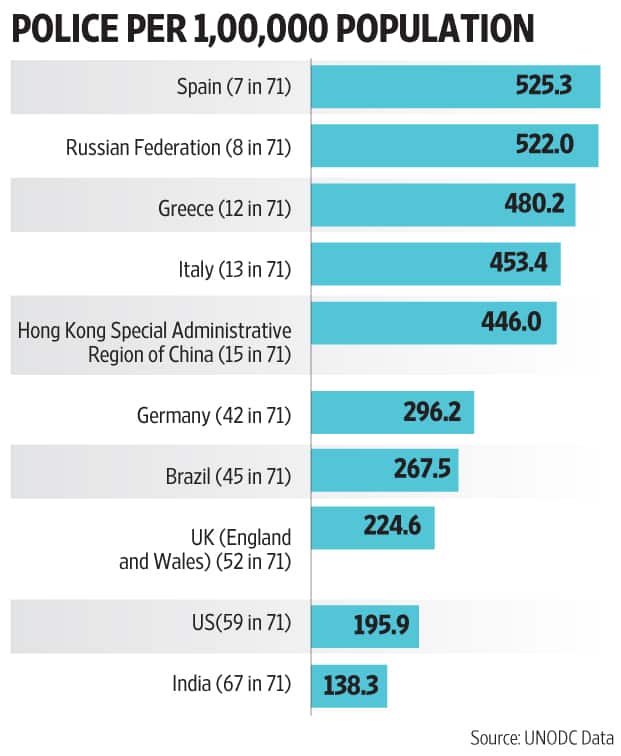 The UNODC data comes with a rider. It suggests caution on cross-national comparisons due to the differences that exist between the legal definitions of offences in countries, or the different methods of offence counting and recording.

Still, India’s police force is understaffed in comparison to its own sanctioned strength. Replying to a Rajya Sabha question on 29 July, junior home minister Haribhai Parathibhai Chaudhary said 20% of the sanctioned posts for Indian Police Service officers were vacant. The situation is similar on other indicators such as police personnel per unit area and population. That is just one part. Unless there is an expeditious judiciary, the criminal justice system cannot function despite a well-functioning police infrastructure. Such a system would run the twin risks of delayed convictions and harassment of those who are innocent but facing prosecution. India’s situation is abysmal on both these counts.

The National Crime Records Bureau (NCRB) data shows the conviction rate for Indian Penal Code crime cases during 2013 was a mere 40.2%. On the other hand, NCRB prison statistics for 2013 show that more than 67% of the prisoners are undertrials.

One of the biggest reasons for this perverse situation is the large backlog in our courts. This seems to be a result of shortage of judges. Data given by National Court Management System of the Supreme Court for 2011 shows that almost 25% of the pending cases are more than five years old. An earlier plainfacts piece had looked at the problems facing India’s judicial system in detail. What does this shortfall entail for our criminal justice system? Simply put, it derails administering of justice. Experts say existing shortfalls might also be affecting the quality and not just the quantity of work being done. However, there may be more to the problem than just lack of resources.

Supreme Court advocate Prashant Bhushan says successive governments have not taken any steps to address this problem. Bhushan recently filed a public interest litigation in the Supreme Court, alleging conflict of interest and bias in the recruitment of judges in Delhi, conducted by the Delhi High Court.

Alok Prasanna Kumar, senior resident fellow at the Vidhi Centre for Legal Policy, said the problem is a result of systemic neglect of legal education and absence of proper incentives for those already in the profession. Kumar recently wrote in Mint about the monetary sacrifice associated with becoming a high court judge as a major deterrent to attracting talented people.

He also said the extant system of appointing high court judges by a collegium is not capable of fulfilling its task, given the sheer magnitude of appointments to be made. He sees little improvement under the pending legislation, as the appointment process would shift from one small group to another.

Two retired Director General of Police officers, K. Subramanium and Prakash Singh, see politicization of the police force as one of the biggest reasons for its failure to perform adequately. The shortage vis-à-vis the sanctioned strength becomes more acute as part of the force is occupied in activities outside regular police work and lack of attention to pre-posting and on-job training, said Singh. Being posted to officer training institutes is considered a punishment posting in states, he added.

The government told the Supreme Court on Friday that the Central Bureau of Investigation (CBI) is facing severe shortage of personnel in probing the Vyapam scam in Madhya Pradesh. While the government’s plea might be genuine, it is difficult to believe that it is the only factor which is obstructing administering of justice. After all, the same CBI has been termed as a caged parrot by the Supreme Court, firmly indicting the political class of derailing justice.