Home / Opinion / Effects of regulatory intervention in banking
Back
Share Via

Effects of regulatory intervention in banking

Dealing with private-debt distress became a major policy challenge for regulators in many emerging-market economies in the last decade in the absence of a strong legal framework. In India, bankruptcy reforms were enacted for the first time in 2016 in the form of a unified Insolvency and Bankruptcy Code. In this context, World Bank estimates suggest that if banks lend $1 in India, they can only recover 26 cents in times of distress, and it takes, on an average, 4.3 years—twice as long as in China to recover the loan. The longer the bankruptcy process takes to recover the loan the lower will be the recovery amount, when assets are divertible. Kingfisher Airlines is the most high-profile case of such bad loans where the company assets are valued significantly less today than what they would have been if the assets had been sold in 2012 to recover the loans.

Since we only have evidence from the creditors’ perspective (not from the debtors’ side), we show that the out-of-court regulatory mechanism that the Reserve Bank of India (RBI) introduced in 2003 has indeed helped Indian banks to remain stable, as there has been no bank failure in India, unlike in other countries.

During the early 2000s, Indian companies faced increasing challenges in meeting their debt-servicing obligations to banks/financial institutions. High corporate-debt overhang poses a risk to banks’ balance sheets and financial stability due to increasing non-performing assets (NPAs) and corporate bankruptcies. With no unified bankruptcy code, the RBI had introduced an out-of-court restructuring programme in the form of corporate-debt restructuring (CDR) in 2003. The intention was to provide a speedy, cost-effective and market-friendly alternative to in-court restructuring procedures in order to reduce risk-taking of banks faced with defaulters, and to avoid bankruptcy of viable companies in the absence of a sound bankruptcy process.

Most of the member banks that participated, particularly public sector banks, made use of the CDR mechanism and restructured a substantial portion of their distressed assets. These banks could retain the asset classification of restructured assets upon restructuring, without slipping into lower asset categories (example, substandard), and could even upgrade non-performing restructured assets to the standard (performing) category after a specified period and charge less to their net income for loan loss provisions, as the RBI supported this extensive regulatory forbearance on such restructured assets.

The question as to whether regulatory forbearance/government guarantees mitigate bank instability has been studied in the context of advanced economies, but it is still an unanswered question in the context of emerging-market economies such as India. In the absence of any detailed analysis of the effectiveness of the CDR mechanism that has existed for over a decade, we assess the usefulness of such an institutional mechanism in maintaining bank stability in India. In particular, first, we assess what impact the volume of restructured assets at the bank level had on risk-taking of Indian banks over the time period 2003-2012 (See: House Of Restructured Assets: How Do They Affect Bank Risk In An Emerging Market?). Establishing a causal effect on this issue is challenging: Favourable regulatory support is extended to augment financial stability of banks, and it often applies to all banks; therefore, it is hard to discriminate the effects of such intervention. Our second study (Does Regulatory Forbearance Matter For Bank Stability? Evidence From Creditors’ Perspective) overcomes this challenge by exploiting variation in the membership status of banks vis-à-vis the CDR programme. 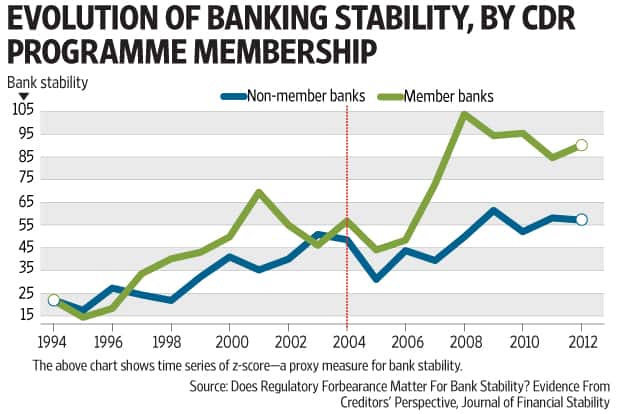 In general, our findings show that higher levels of restructured assets significantly reduced risk-taking as banks benefited from low provisioning, and this relation is more pronounced for banks that had lower loan-loss provisions. We also find that by restructuring distressed assets, public sector banks benefited significantly more in improving their stability than private sector domestic and foreign banks. In the chart, we separately plot the time series of z-score (a proxy measure for bank stability) for both member and non-member banks. The stability of the member and non-member banks moved roughly together immediately before the inception of the CDR mechanism. From 2005 to 2012, the stability of member banks increased substantially compared to non-member banks, as CDR was fully operational in the year 2004, and naturally, bank stability went up once they started reaping the benefits of regulatory forbearance.

In April 2015, the RBI stopped providing regulatory forbearance on any restructured loans, which probably explains why the size of NPAs increased to 8.3% of total loans in June 2016, up from 4.3% by end-March 2015. The rising NPAs also suggest that the CDR mechanism was beneficial for Indian banks, which kept NPAs under 4% during 2005-06 and 2013-14, but the restructuring mechanism cannot be a permanent solution.

Overall, it can be claimed that by reducing NPA overhang under the guise of CDR, the RBI’s intention of having a stable banking sector has largely been achieved for the studied period. However, since 2013, the uptrend in restructuring corporate debt was worrisome. Therefore, the regulator should tighten the macro-prudential norms and emphasize international best practice in asset classification and provisioning of restructured corporate loans, ensuring no scope for evergreening.

With higher NPAs, banks will have to increase provisioning on existing restructured loans gradually, otherwise any substantial losses might lead them to exhaust the capital base to a point when insolvency or illiquidity would be inevitable. As other emerging-market economies are facing similar corporate distress (example, Brazilian companies), our finding implies that such a mechanism with judicious regulatory forbearance can be an effective tool for regulators in order to forestall bankruptcy of viable companies on the one hand, and to avoid accumulating bad debt and thereby the fragility of financial institutions on the other.

Published with permission from Ideas For India (ideasforindia.in), an economics and policy portal.