Home / Opinion / The Bollywood gender age gap
Back
Share Via

Last month, Karan Johar announced that 22-year-old Alia Bhatt would play the romantic interest of 49-year-old Shah Rukh Khan in English Vinglish director Gauri Shinde’s second movie. The 27-year age gap seems large but is not all that surprising, nor is it the widest.

Ever so often Bollywood draws inspiration from Hollywood, so does this study. GraphJoy, an American data visualisation web site, analysed the gender age gap in Hollywood here . Mint’s Bollywood study looks at 925 movies released (and yet to be released) between 1990 and 2015, and which featured 20 top male stars.

The analysis shows the median age gap between male leads and their romantic interest keeps widening as the men grow older. Amitabh Bachchan and Sunny Deol are the actors who have the widest gaps with their female co-stars and not surprisingly are two of the oldest actors in this sample. Simply put, even as male actors grow older, the ages of their romantic interests remain practically unchanged. Due to this, the ladies really start to fall behind the men in terms of age once the men cross 35. When male leads are under 35, the median age gap is a believable five years. However, this leaps up to nearly 13 years once the men cross 35. These ages are represented by the black line separating the blue and orange boxes in the accompanying chart. For older-than-35 category, the range varies from 13 to 30 years. The last number stems from three movies. I Love New Year pairs Sunny Deol with Kangana Ranaut . In Policegiri, Sanjay Dutt was paired with a 3-decade younger Prachi Desai and in Waqt, Shefali Shah plays the wife of Amitabh Bachchan.

Note that this analysis excludes Nishabd and Cheeni Kum where the script calls for a huge age difference for the main roles. It also does not count Black where Amitabh Bachchan is Rani Mukherjee’s teacher.

For ages over 35, Hrithik Roshan and Abhishek Bachchan have the lowest median age gap of nine years. The highest median gap, of 19 years, in this category is held by Amitabh Bachchan, which seems only natural since he is the oldest of the lot and his age gap has only widened as his career has progressed. Shah Rukh Khan and Govinda’s careers seem an exception to the broad trend, however. It’s clear that the age gap increases dramatically after the men turn 35. What about the frequency of older female actors appearing alongside younger male actors?

Before the men turn 35, a little under one out 13 movies have an older woman playing their romantic interest. This share falls to one out of 125 movies for men past the age of 35. Also, the greatest age gap when the female lead is older than the male lead is 13 years, while it’s 32 years (excluding Nishabd) when the male lead is older, again Amitabh Bachchan in Lal Baadshah. 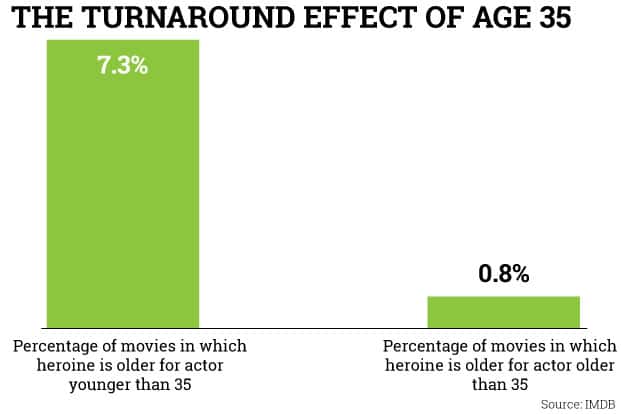 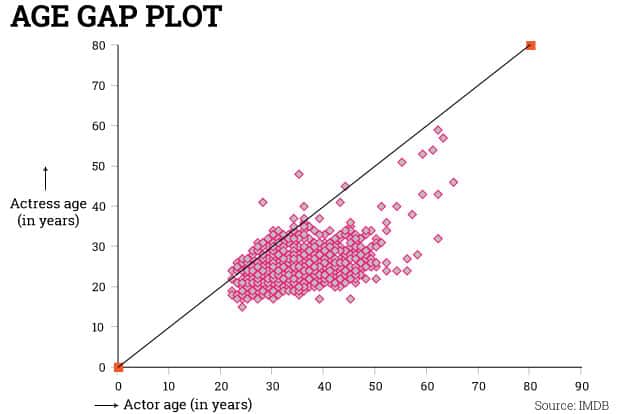 Out of the 925 movies observed, the female lead is more than one year older than the male lead in just 2.4% cases, which means a total of 23 movies. Even in these cases, the lion’s share goes to the ones in which the female lead is between only 2-3 years older. On the other hand, the men are older than women by more than a decade in over 40% of the movies. 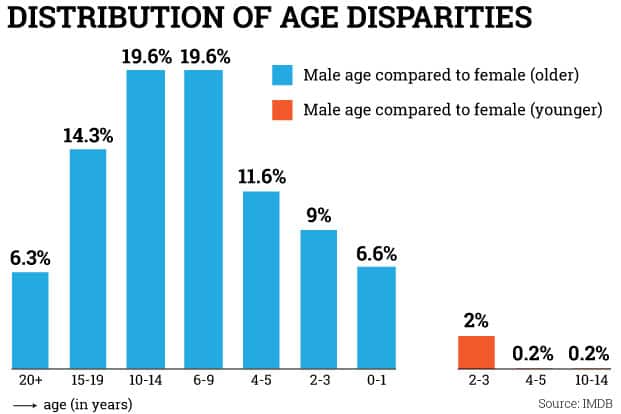 Since women are so much younger, we also looked at ages at which they, as well as their male counterparts, appear most frequently in movies. Here again, women clearly peak disproportionately in their 20s, only to wither away by the end of their 30s. Some of the women even star as teenagers. For men, not even one of 20 stars we looked at appeared as a teenager. The men did most movies in their 30s, but continued well into the 50s. In fact, only 1.7% of the women appeared in the analysed movies (starring these 20 male leads) after turning 40. The same share for men is 31%. 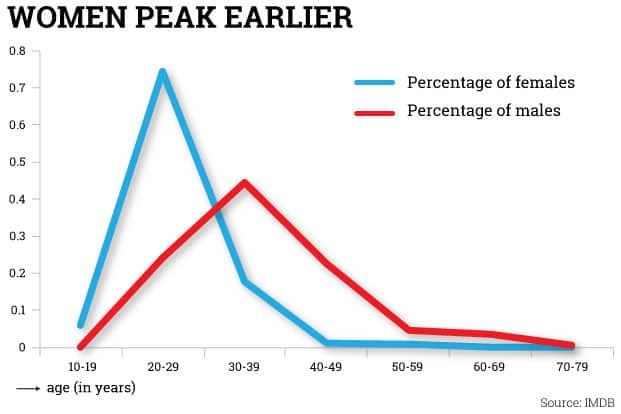 With Bollywood’s propensity to relegate female actors to mother, sister and other character roles as they grow older, if they don’t not phase them out entirely, this trend is to be expected. These stereotypes are fading, but extremely slowly.