The last month elections for the three Rajya Sabha seats from Bihar send a very strong political message. The ruling Janata Dal (United) or JD(U) led by Nitish Kumar was able to win all three seats, but not till after it made peace with its one-time political rival, Lalu Prasad-led Rashtriya Janata Dal (RJD).

At one level, it is a tacit admission of Kumar’s diminished political clout. At another, the alliance between the one-time rivals redraws the political contours in Bihar, exactly a year ahead of the polls to the state assembly. The reunion of these two prodigies of Jayaprakash Narayan is expected to create new social combinations challenging the Bharatiya Janata Party (BJP), which has emerged as the party to beat after their fantastic showing nationally.

While some commentators have been quick to give the JD(U)-RJD alliance the edge in Bihar, I believe that it is still too early to make such a call. Further, my analysis suggests that BJP-led National Democratic Alliance (NDA) will still be tough to beat.

The state government, under the leadership of Nitish Kumar, should be credited for the turnaround in the economic growth in Bihar, spurting to 14.5% in 2012-13 from the negative growth rate it inherited from the regime headed by Prasad. A key reason was the political stability of Kumar’s regime when it was in alliance with the BJP—something that is less visible after the two parties parted ways last year.

With just 16% votes and two seats in the general election, a politically marginalized Nitish Kumar took three steps which demonstrate that governance is no longer top priority. 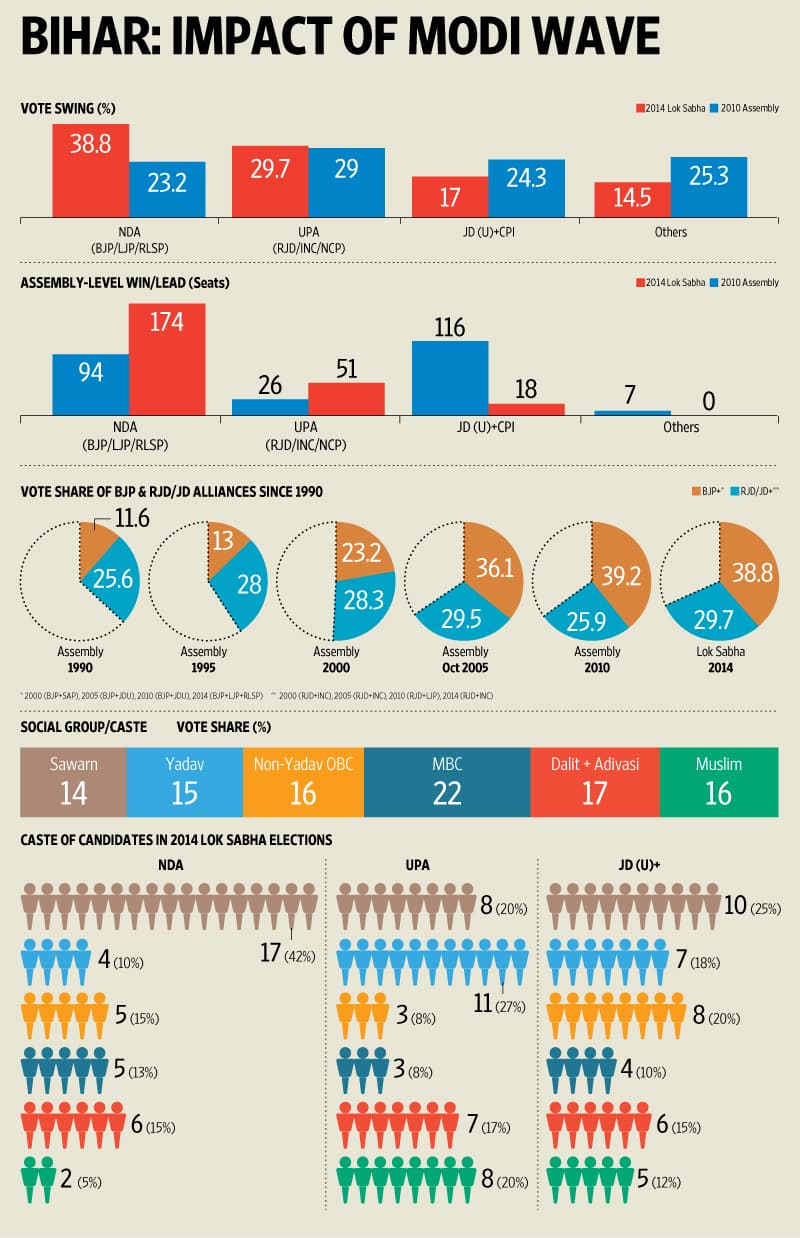 Clearly, after 25 years, Kumar is now trying to turn the clock back and make social justice and secularism the defining features of the political discourse.

In post-Mandal politics, Prasad had comprehensively transformed the political discourse in North India by giving political identity to other backward classes (OBCs). He even survived the onslaught of the BJP’s Mandir (Temple) movement by polarizing Muslims (16% of the population) and Dalits (around 11%) along with a large number of OBCs under the banner of social justice. As a result, the vote share of the Congress was reduced to 16% and the BJP to its peak of 13% managed during the height of the agitation to build a temple for Lord Ram in Ayodhya.

However, in the just-concluded general election, this political arithmetic was turned on its head. The BJP made governance the focus of its agenda and positioned Narendra Modi as an OBC leader.

As a result, neither Prasad’s secularism nor Kumar’s sushasan (good governance) could stop NDA from winning three-fourth of Lok Sabha seats from the state. With complete polarization of Sawarn, strong backing of 16% non-Yadav OBCs and 22% most-backward classes along with 5% Paswan, BJP was invincible in a triangular contest.

The patch-up is an effort to make the contest a two-cornered one and thereby enhance their prospects. With the backing of 15% Yadav, 16% Muslims, 10% Mahadalits, 3% Kurmis and a large chunk of 22% MBCs (most backward castes), the Yadav-Kumar alliance is trying to resurrect the social arithmetic last seen in the state in the 1990s.

But will this be sufficient to reverse the political momentum in favour of the BJP?

Kumar is identified as the person who ended the 15-year tenure of Yadav in Bihar. Consequently, it will be difficult for Yadavs to vote for non-Yadav candidates of JD(U). Moreover, results and surveys of the 2014 Lok Sabha election suggest that BJP did succeed in attracting the younger Yadavs swayed by their aspirations and promise of governance and soft Hindutva; this appeal will only be enhanced in seats where RJD won’t put up a candidate.

Kumar has certainly cultivated about 15% votes who are primarily MBCs and Mahadalits. However, these two communities were the ones that suffered the most at the hands of the Yadavs. It is unlikely they would have forgotten the past, and hence unlikely to root for Prasad.

Moreover, armed with the powers of central government, BJP will also go all out wooing this key segment accounting for about 32% of the electorate. Thus, the limitation in transferability of about 30% votes—15% Yadav from RJD to JD(U) and 15% Mahadalit/MBC from JD(U) to RJD—will impede consolidation of the alliance vote.

About 15% voters, who appreciate Kumar’s governance record, were swayed by the Modi wave in the general election. They would, however, have voted JD (U) in the assembly polls. Since Prasad, Kumar’s new political partner, is viewed as someone who delivered bad governance, this voter segment may stick to BJP. At the same time, it should be borne in mind that while the leaders may see reason to get back together, the cadres are unlikely to be as forgiving.

In the 2010 assembly election in Bihar, the BJP-JD(U) alliance managed a three-fourth majority with just 39.2% vote share. Similarly, in the 2014 Lok Sabha polls too, the NDA, comprising BJP, Lok Janshakti Party (LJP) and RLSP (Rashtriya Lok Samata Party), led in 174 assembly segments with 38.8% vote share. In the assembly elections held between 1990 and 2005, politics in Bihar has been very fragmented and no alliance or party could cross the 30% vote share; even at his peak, Prasad could poll just around 28% votes in the 1995 and 2000 assembly elections.

However, in the last two assembly elections, the contests became triangular since either the LJP or Congress stayed out of the main alliance. This worked for NDA and it managed to secure majority despite polling less than 40% vote share in 2005 as well as in 2010. This was repeated in the 2014 Lok Sabha election, but this time with BJP fighting on its own in alliance with LJP. But after the patch-up between Prasad and Kumar, the electoral fight will no longer be triangular. In other words, the winner will have to poll more than 40% vote share. Obviously then, BJP will have to not only retain its present vote share of 38.8%, but also enhance its vote share by around 5%.

This is possible, provided:

(A) Hijacking governance agenda: Given the construct of the JD(U) government and its leadership, NDA will be served up issues that will allow it to question the government’s commitment to governance. At the same time, BJP will seek to project itself as the main stakeholder in driving governance when it was in power in alliance with JD(U).

(B) Shedding upper caste image: BJP will have to work hard to retain the image so carefully projected by Narendra Modi. Instead of being viewed as an upper caste party, as it has been in the past, Modi emphasized his OBC credentials and also ensured equity in the distribution of tickets in the Lok Sabha election. One way will be to give representation to OBCs in the Union cabinet and projecting OBC faces in the state. The OBC combo of Narendra Modi and Sushil Kumar Modi could once again be employed in the assembly elections. The party will also have to reduce over-representation of Sawarns in ticket distribution; 17 (43%) tickets were given to them in the just-concluded Lok Sabha election, thrice the proportion of their vote share of 14%.

(C) Push from Delhi: Prime Minister Narendra Modi made huge promises during his campaign in Bihar and raised expectations. He will now have to walk the talk if BJP is to continue where it left off in the Lok Sabha polls. Failure to do something special for Bihar will be handing an effective weapon to the opposition.

(D) Limitation of communal polarization: JD(U) and RJD had to take several extraordinary steps to appease minorities because of competition for the same vote bank, which triggered a reverse polarization in favour of BJP. With secular forces uniting, this may not necessarily hold true, especially since BJP’s present politics is defined entirely around governance.