Demonetisation and its impact on GDP growth

Cash is the preferred mode of transaction globally, accounting on average for 85% of them. In some of the developed countries, transactions carried out through cash are less than 50% of total transactions. In India, this ratio is at around 95%. Easy accessibility, its certainty of acceptance and efficiency as the settlement is not dependent on any additional infrastructure, and no additional charges make it universally the most preferred mode. The only problem of cash transactions is the anonymity and difficulty of establishing an expenditure trail which make it an ideal mode for unreported transactions as well.

The ratio of currency to GDP (gross domestic product) in India, which averaged 8.4% during 1975-2000, crossed 10% for the first time in 2002-03 and has remained above this level since then. This ratio has averaged 10.8% in the last decade. There has not only been a relatively sharp increase in the ratio of currency to GDP during 2015-16 (table 1) but a reversal of the negative trend witnessed in the previous three years. The increase in this ratio could have persisted through the current year as well before the demonetisation of higher denomination notes announced on 8 November. 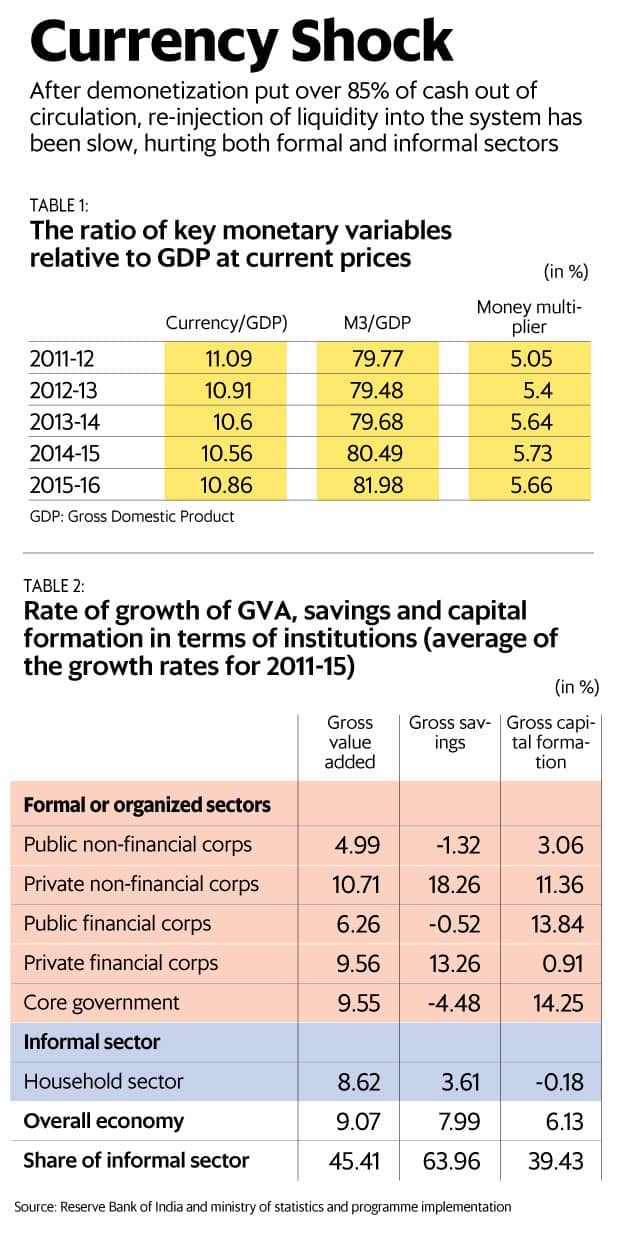 Demonetisation of high denomination notes (of Rs1,000 and Rs500) has put over 85% of currency out of circulation. This has resulted in short-term disruptions in transactions in agriculture and related sectors, small establishments, households and among professionals. Since injection of liquidity is slow, incomes in both formal and informal sectors have been affected with the intensity of adverse impact being greater for the informal sector. Since self-employed and casual workers dominate in the overall economy, their incomes may suffer a setback. While some may view it as deferring expenditure and income, a part of it may actually be revenue and income forgone forever.

Some rating agencies have estimated a decline of around 40 basis points in GDP growth for 2016-17 and of a smaller magnitude in 2017-18. These estimates are based on quicker liquidity injection and a sharp shift to cashless transactions. However, there is a section of the population which will still like to deal in cash because of religious beliefs. The estimation of a 40 basis point decline in GDP, given the casual nature of employment for nearly 80% of workforce, may not materialize, at least in the time frame envisaged. In our view, the dent in GDP growth may be larger than anticipated and recovery to the normal growth trajectory may take three to four quarters.

It is indeed difficult to predict the likely growth trajectory post demonetisation. But assuming that the formal sectors maintain the observed growth (average of last 10 quarters) and the informal sectors have a flat growth in the third quarter (Q3) of 2016-17 (with an estimated contraction in informal economic activity in trade, road transport and construction sectors by 5%), Q3 growth may decline to 4.1% in a best case scenario. In case the contraction extends to industrial and professional services sector and is a little sharper in construction and trade, Q3 growth may dip as low as 1.5%.

Growth is expected to recover gradually in the fourth quarter (Q4) of 2016-17 and in the first quarter (Q1) of 2017-18 before returning to its normal trajectory thereafter. It is indeed true that increase in liquidity in the formal banking sector will increase GDP growth originating in this sector, but with its share of around 6% in GDP and with an increase in growth of 0.5 and 1.0 percentage points factored in, this sector’s growth in Q3 and Q4, respectively, its overall impact on GDP growth assessed may not be significant. The impact of easy availability of credit to the formal sector on account of this additional liquidity may take some time to materialize, and in Q3 and Q4 it may not be significant. Further, a decline in demand in general may also keep the demand for investible funds at moderate levels.

How these informal sector issues will get incorporated into the quarterly GDP numbers of the ministry of statistics and programme implementation is important as the quarterly estimates of GVA are compiled by the benchmark-indicator method. The previous year’s annual estimates are extrapolated with the growth rates observed in indicators such as quarterly estimates of forecast crops and livestock, index of industrial production, steel and cement dispatches, sales tax returns, sale of commercial vehicles, deposit and credit growth of banks, service tax, revenue expenditure of government, all of which are for the formal sectors. The inherent assumption in this tracking approach is the assumption of uniformity of growth for the formal and informal sector. This assumption has little relevance under the current circumstances, and we may still be surprised with a better official rate of GDP growth for Q3 and Q4. If so, we have to take it with a pinch of salt.

R. Gopalan and M.C. Singhi are, respectively, former secretary and senior adviser of the Department of Economic Affairs.