The least that Anna Hazare would have accomplished would be to get the average citizen up and shouting. Shouting without a trigger—negative or positive. The attack on Mumbai lit candles. The World Cup win triggered a mass beer party. But to get the Punjabi Bagh auntie in a georgette salwar kameez to leave her saas bahu serial for the day and get in the car with Papaji, Lucky and Pinky, to go across the city to light a candle just because an old man said he would starve himself to death is surely a symptom of change. 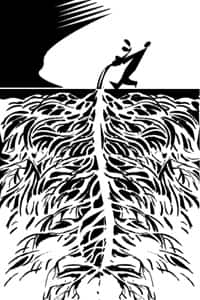 If we go back just 60-70 years and listen to the then urban intellectuals who belonged to another country, reacting to the use of passive aggressive methods like Hazare’s by another man in white, the similarity of response is striking. The incumbents then did not like that form of protest. They feared total breakdown of system laid down so carefully by the Raj. We don’t like it now either, 60 years later. We, the incumbents (let’s have no pretensions, we are all incumbents), have learnt to live with the system, feed off it, bypass it. Our stakes are all in keeping this system, however rotten, going. A voice like Hazare challenges the bubbles we have created, some that protect us from the system and some that participate in the system. This post-independence incumbent sees Hazare as a soft Maoist. As somebody who holds the system to ransom and may trigger chaos.

What are we afraid of? Chaos? Fragmentation? If we agree that the average Indian is a utility-maximizing upwardly mobile person who seeks to shake off the past of scarcity, and knows that if we continue to grow as we are, his future is secure. Why would such a person stake it all by lighting candles, singing songs and signing petitions to the government? Because, possibly, he realizes that not to do so is to actually put at stake this future. In a system caught in a Reservoir Dogs kind of a stalemate where because everybody knows the dark secrets of everybody else in the top 1,000 people who run the country, no action is possible, possibly Hazare offers a window of opportunity to break that stalemate without killing everybody. There is an understanding that the system is so rotten that something has to give. Will it be an extension of the Maoist corridor or will it be many more Hazare-like protests.

Possibly we could look at Hazare in another way? As somebody who works like a pressure valve that prevents a violent expression of the resentment building up inside millions of Indians who feel that their honesty is a badge of their stupidity. That there is discontent with the system is amply clear—there is a tiredness of dealing with a system so corrupt that any interaction with it leaves one poorer and worse, with a feeling of having been violated. The least that Hazare has done is to act like the seeti (whistle) that sits on top of a pressure cooker and when the pressure builds up, allows steam to escape. I look at the four days of cacophony around Anna Haraze like a venting of public anger around a figure that was finally devoid of some negative story about personal graft, political machination or religious bigotry. More than a pressure valve, the four days of Hazare (yes, timed beautifully between the two tournaments—and isn’t it great that activists are now so smart?) have given a new idea to those who could not go beyond the fatalistic throwing up of hands and saying: what can we do, it is a rotten system? That change is possible. Just as the Internet 10 years ago ignited a million businesses of which now just a few survive. Hazare’s form of protest will trigger a million experiments in trying to bring about change. Some will succeed. Some will go horribly wrong. But change will begin to trickle through.

Monika Halan works in the area of financial literacy and financial intermediation policy and is a certified financial planner. She is editor, Mint Money, and can be reached at expenseaccount@livemint.com