Back home, optimism was in the air for the third quarter earnings season. Upgrades in the gross domestic product growth estimates for the fiscal year also boosted investor sentiment. The government’s reassurance that its economic policies would be growth-oriented also propelled the markets.

Moving ahead, the holiday mood is still in the air. Markets in the US and all major European bourses would be closed on Friday and the UK, Indian, Australian and New Zealand markets would be shut on Monday, so no major fund activity is expected.

However, gains are likely to be extended this week on optimism about a sustained global economic recovery. In the US, however, the Treasury’s $118-billion auction of two-year, five-year and seven-year notes will be watched by investors for clues to demand for US debt as efforts to fuel growth pump up government spending in the world’s biggest economy. Besides this, the Conference Board’s index of December consumer confidence will merit the Wall Street’s attention on Tuesday. The October S&P/Case-Shiller home price index will be watched closely on Tuesday, apart from the weekly government report on jobless claims on Thursday. French third quarter gross domestic product (GDP) data on Tuesday would also be watched for a sense of economic activity in Europe. 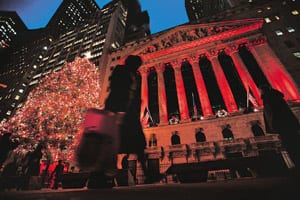 Festive mood: The New York Stock Exchange is all lit up. No major fund activity is expected this week as markets in India will be closed on Monday, while those in the US and the UK will be shut on Friday. Daniel Acker/Bloomberg

Technically, the markets are all set to touch new 52-week highs this week as the trend is clearly pointing up. Some key technical indicators are even suggesting sharp gains this week. In terms of the S&P CNX Nifty, the first meaningful resistance is at 5,252 points, and if this is crossed then the next resistance would come at 5,297 points. This level would offer a rising Nifty some trouble, but would not be strong enough to arrest the momentum. If this level is crossed, the next resistance would come at 5,411 points, which could threaten to retard the momentum. I am expecting profit selling to emerge at this level.

On its way down, the Nifty will have its first, moderate support at 5,128 points. It would be followed by 4,991 points, which is a strong support and should offer solid ground for the Nifty to bounce.

From my previous week’s recommendations, JSW Steel Ltd, Sesa Goa Ltd and Hindustan Zinc Ltd all overshot their targets by a wide margin.