More women falling ill, but they have lower access to medical treatment

India has made many improvements on women’s health indicators. To name just two examples, fewer mothers are dying at childbirth and fewer adolescent girls are giving birth. However, as recent data from the National Sample Survey Organisation (NSSO) shows, there is a lot of work to be done in improving women’s access to healthcare.

NSSO data shows that more women are falling ill than men and this gender gap in morbidity has increased over the years. Why do more women report being ill?

One reason seems nutritional deficiency as these pages pointed out recently. Researchers such as Dr Ravneet Kaur from the department of community medicine at the All India Institute for Medical Sciences blame nutritional deficiency, lack of exercise, increase in stress levels and rise in women’s life span. They also say that most government health schemes, such as the National Rural Health Mission, are overwhelmingly centred around women’s reproductive health, and neglect other aspects of women’s health.

The higher rate of illness in women is not unique to India. A 2009 paper by Biplab Dhak and R. Muthurayappa, titledGender Differential in Disease Burden: Its role to explain gender differential in mortality, noted that in the developed world, women bear a higher burden of morbidity (or a higher rate of illness, especially from the age of 30 onwards) but live longer than men. The authors note that this is true in the case of India as well. The paper concludes that while women fall ill more often with diseases that are not life-threatening, men have a higher mortality rate because they experience higher incidence of severe illness and also indulge in greater risk behaviour. 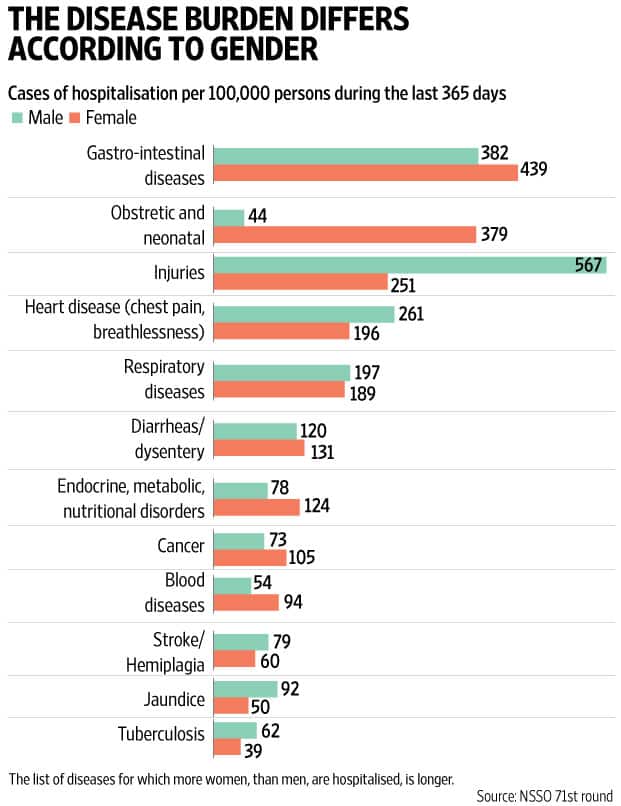 While more women than men reported being ill, there was hardly any difference between the two genders in terms of the numbers of men and women who received treatment, and this has been the case in previous years as well. However, data shows that average medical expenses on men are typically higher than for women. Why is it that more money is spent when men are hospitalised?

Note here that data is not available to compare spends on a like-to-like (for the same disease) basis. Perhaps, average medical expenses are higher for men simply because “men have higher financial means, and hence can spend more on outpatient and hospitalisation expenses", says Dr. Bidyut Kanti Sarkar, a research scholar at the Indian Institute of Public Health.

Other researchers such as Dr Ravinder Khaiwal, an associate professor at Postgraduate Institute of Medical Education and Research, Chandigarh, argue that this is because men are more likely to be hospitalised due to trauma or injuries, which involve longer and/or costlier treatment. There is some statistical basis to that statement as Chart 3 shows that men are more likely to suffer injuries.

But gender discrimination can’t be ruled out either. A 2014 paper published by the Indian Statistical Institute, authored by Akansha Batra, Indrani Gupta and Abhiroop Mukhopadhyay, titled Does Discrimination Drive Gender Differences in Health Expenditure on Adults: Evidence from Cancer Patients in Rural India, studied rural cancer patients in a public tertiary health centre in Odisha. They found that women patients faced disadvantages in the treatment of cancer due to social factors. Gender discrimination accounted for 73% of the difference in cumulative total expenditure on cancer patients. They also found that women were 20 percentage points less likely to get treatment for cancer before coming to the tertiary centre.

What is the fallout of this discrimination?

That said, an increase in life expectancy does not necessarily translate into better health outcomes either. Even though women’s health status in India has improved from the 1990s to the extent that today they outlive men, their health has not improved vis-a-vis men. Older women above 60 years of age are less mobile than men in the same group, says an NSSO report on the elderly in India. Elderly women are more likely to be confined to the bed or home than elderly men.

Unless women have greater autonomy and control over their lives, they will continue to have limited access to medical treatment.