To Russia, with social media

To Russia, with social media

I recently was part of a US state department/White House delegation to Russia. Our mission was to foster US-Russian cooperation, in fulfilment of the US’ policies of “21st-century statecraft" and citizen diplomacy. That sounds high-minded, for what the Russians were most interested in was how to build their own Silicon Valley.

The Russians thought that the way forward was to give tech companies some money and put them near a great university. Presto: a new Silicon Valley. For their part, the US delegation assumed that you could pour in some social networking and create a civil society. As for me, I went in with my usual cynical notions, born of travelling to Russia every few months for the past 20 years. 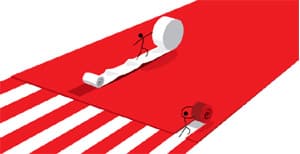 We were a motley crew of nine techies, including eBay chief executive John Donahoe, Mozilla Foundation chair Mitchell Baker, and Twitter founder Jack Dorsey. And then there was the actor Ashton Kutcher, of whom I had barely heard. Despite his fame, he turned out to be a serious techy and an extremely good communicator.

The lessons we learnt on the trip are relevant for anyone who wants to create a Silicon Valley, or even just a “Silicon Valley-style" organization—that is, one that can innovate and implement the innovations, producing profits, happy workers, serial entrepreneurs, and a modern, vibrant economy.

I started my discussion with Russia’s government leaders by talking about my experiences as chair of Nasa’s innovation and technology advisory committee. The issue, I said, was not really about funding technology innovation; it is how to create a culture that rewards thoughtful innovation and considers mistakes the price of learning.

Another requirement is good customers—that is, customers who are willing to pay good money for good products and good services, are willing to try out new things that show promise and to give feedback, and are unwilling to take bribes.

All this is harder than simply building a university and funding a few start-ups. You need to change a culture from the ground up—and then let businesses grow, without too much interference, but with protection from monopolists, bad customers and bureaucrats.

In the end, the delegation produced a lengthy document with 21 separate recommendations. But as one Russian later wrote to me, “Over the (last) 20 years, there have been literally hundreds of similar delegations… Most of their recommendations rest…on a shelf somewhere, unimplemented and forgotten."

So I set my sights on a single project, a potential Russian version of a service recently implemented in the US as Text4Baby, which invites pregnant women to sign up by SMS to receive periodic messages and questions (weight gain, whether the baby is kicking, whether the woman is drinking) on their cellphones. The system monitors the answers and refers the woman to a clinic if the answers are outside normal range. Depending on the surrounding medical infrastructure, it can also send her to a clinic for a routine pre-natal check-up.

In the US, the project was started by Voxiva Corp. (I’m on the board) with support from a variety of commercial sponsors (notably Johnson and Johnson) and free SMSes from all the major mobile carriers. In Russia, part of the challenge is to find local sponsors. But in any market, the biggest challenge is to find someone to take responsibility for the project (and to find the sponsors).

In Russia, that person is Elena Dmitrieva, head of the Healthy Russia Foundation, who is now engaging with local sponsors and the Russian government, which must supply or at least endorse the medical protocols that the system will implement, and also suggest by geography the clinics to which women should be referred.

This sounds like a lot to do, and it is. But as Donahoe of eBay kept reminding us, “Projects don’t happen unless you have a person responsible, a plan, and a deadline."

That sentence, I believe, contains perhaps the single most important piece of wisdom we left behind.

Beyond that, we fostered connections that happened all around us. Most of our meetings were set up traditionally: meet with educators, meet with entrepreneurs, meet with businessmen (all men), high-school students and so forth. But there were a few meetings where the groups mingled, and many occasions when we thought, “Ah, this entrepreneur should meet with that NGO." We have already connected some of them by email.

Interestingly, it was not just the bureaucrats who seemed to be stuck in old times. So were many of the NGO leaders, who railed abstractly against the old Soviet state, while their young assistants sat silently in the background.

The Russian government (like the Soviet one before it) undoubtedly regards civil society as a threat. Indeed, some NGOs are a threat. But our unspoken message was that civil society is something that should be allowed to flourish if the authorities want a Russian Silicon Valley— or even just a cohesive country.

Civil society is not just politics: It is a restaurant giving unused food to the poor. It is a for-profit company such as Twitter providing its service free to rich and poor alike (even though advertisers will focus on the rich). It is successful entrepreneurs mentoring start-up entrepreneurs, and NGOs engaging not just with the government, but also with commercial outfits to get support for activities that will address vexing social problems such as maternal and infant mortality.

Yes, attentive readers will notice that Elena Dmitrieva does not yet have a deadline for launching Russian Text4Baby. We will figure that out when Elena and I meet again in New York City later this month.

Esther Dyson, chairman of EDventure Holdings, is an active investor in a variety of start-ups around the world. Her interests include information technology, healthcare and private aviation and space travel. Comments are welcome at theirview@livemint.com